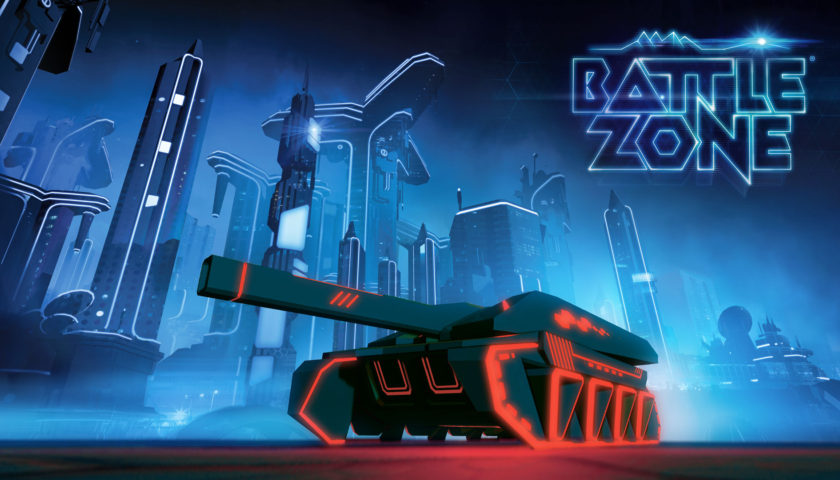 Battlezone is a franchise that’s been on the edge of relevance for decades. It dates back as far as 1980 where it was released as a first person tank combat game that released in Arcades before making its way to the Atari in 1983. Its pseudo-3D visuals, combined with the viewing goggles that you had to look through lead many to consider it to be the world’s very first Virtual Reality game. Battlezone’s legacy is long; there have been ports, sequels, re-imaginings and updates emerge over the years, but many thought the franchise was lost when Atari went bankrupt in 2013. It wasn’t until the franchise was salvaged by Rebellion Developments that the future of the Battlezone franchise begun to take shape – now, 36 years after the original arcade release Battlezone returns in true Virtual Reality.

Battlezone VR is an interesting release that lives in two very distinct spheres. On one hand it is a love letter to the past, the glory days of the arcade and the Atari, but on the other it’s packaged with a device that many consider to be the way of the future. The roots of the franchise still underpin the core aspects of the game, but not only does Battlezone VR make the obvious VR jump, but it now includes Rogue-like elements, procedurally generated maps and a totally different flavour. The core tenants of Battlezone are still present; you’ll still be rolling about the stage (one that has admittedly gotten a facelift since the vector days) picking off enemies in the attempt to be the last one standing, but you’re now contending with an enemy of growing strength, and as you claim more hexed territory in the map, as is your enemy, resulting in an inevitable large scale confrontation that rarely comes to a quick resolution.

Supply tiles give you opportunities to buy new tools and equip new weapons, you can set forth probes to scope out what dangers lay before you, and you have a defined number of hearts that once depleted (for losing enough encounters) will result in the game ending in Game Over. There’s nothing particularly clever that’s being done here – take out a radio tower, invade a base or overrun an enemy convoy – as I said, there’s nothing particularly high brow going on, but they’re simple missions that allow the player to just blow things up. Encounters are cool and the lighting is fantastic ensuring that each skirmish is exciting (though still somewhat repetitious)

There’s no sickness concerns to be found in Battlezone VR because despite being behind the wheel of a tank, you’re never feel the bounce that you would if you were rolling over uneven surfaces; you feel more as though you’re gliding over the ground with only a slight bump occurring as you hit an incline. The AI is a little simple and can be easily exploited, enemy types are not super diverse but have their challenges and co-op play is a solid bit of fun for you and three other friends. Understandably though you may not have three other friends who have given up on their home loans to afford VR so should you wish, you can drop into other online player’s games and join the fray with them.

Battlezone VR treats its touchstone with respect, but does some nifty things to advance the franchise further. I was initially concerned when I saw Rebellion’s name attached to the game, but they’ve shown the utmost respect for a key moment of gaming’s history whilst has simultaneously advanced the Battlezone franchise. It’s certainly not perfect, and the gameplay has the ability to get a bit repetitious but there’s plenty of fun to be had with Battlezone VR.