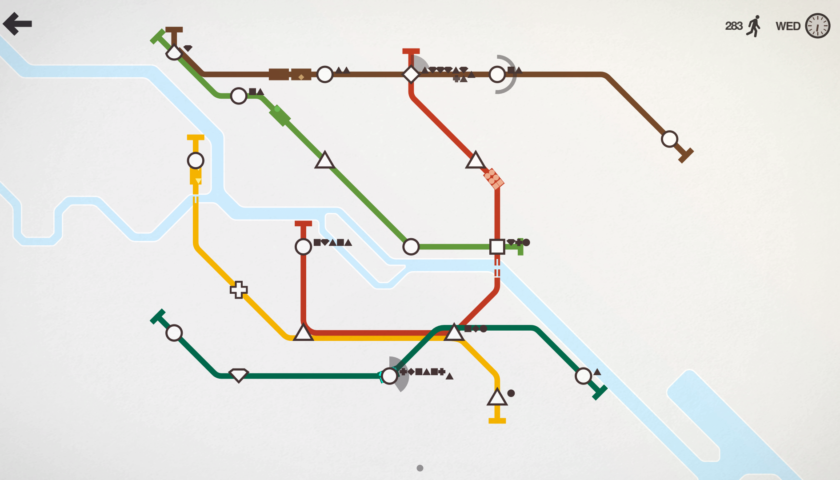 Mini Metro sprang to life during the Ludum Dare 26 Game Jam in early 2013. Developers Peter and Robert Curry knew they were on to something, and Mini Metro was greenlit on Steam one year later. By November of 2015, they had moved to a full PC release after a period of Early Access and 2016 has seen the release of the game on both Android and iOS platforms. With a compelling aesthetic and one-more-turn gameplay, it’s easy to see why Mini Metro was selected as a PAXAUS 2016 Indie Showcase winner. Player2 caught up with Robert to find out more about the development of Mini Metro and the future for Dinosaur Polo Club.

Stephen del Prado: Hi Robert, thanks for talking to Player2! How did you first get into game development? Also, what inspired the name Dinosaur Polo Club?

Robert Curry: Peter and I pottered about with small hobby projects and then both studied Computer Science at university. That led to employment in a local games studio, Sidhe Interactive (now PikPok), where we worked on sports titles for Xbox, PS2 and PC. After about four years of that, in 2006, we left to go indie. That didn’t go so well, we were a year too soon – before the App Store existed and Steam became indie-friendly – so that folded before two years was up and we spend the next few years doing general IT programming work. Early in 2013 Peter and I decided to spend a weekend and enter a game jam – and Mini Metro came out of that!

The name Dinosaur Polo Club doesn’t really mean anything, we knew our studio name wasn’t really that important. It develops its own meaning from the games that come out of it.

Where did the initial idea for Mini Metro spring from? How much of the Ludum Dare 26 build remains in the final product?

Mini Metro was borne out of constraints. Peter and I had started many game projects in the past but rarely finished them, mainly because our enthusiasm burned out long before we were close to being finished. So we knew that we had to scope our game ideas right down, and so that led to us talking about graphically simple, procedurally-generated games. I’d been in London for a holiday recently and quite enjoyed planning my trips on the underground so that was still in my head.

Our LD26 game, Mind the Gap, still forms the core of Mini Metro. The main changes have just been cosmetic or usability enhancements.

I do like Washington DC’s because its stations are so roomy (and air-conditioned!), but I have to go with the London Underground. It has such an unmistakable character, from the names of the stations to the announcer’s voice.

What were you doing when you found out Mini Metro had gained a spot in the Indie Showcase?

I checked my emails just after the credits rolled for the new Ghostbusters movie.

Most certainly! More maps of course, plus we’ll be redesigning endless mode and introducing that into the mobile build. We’re also talking about a map editor for the desktop version.

What can PAXAUS attendees look forward to at the Mini Metro booth?

This year at the booth we’ll have Mini Metro playable on iPad. Plus the developers, come say Hi!

What’s next for Dinosaur Polo Club?