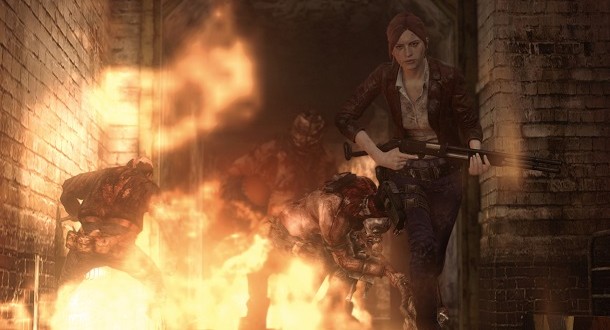 Resident Evil Revelations 2 is an episodic game so we are doing an episodic review. Stephen will be looking at all of the episodes of RE Revelations 2 and putting together a small review on each. You can check out Episode one here and Episode two here

Episode 3 of Revelations 2 is overflowing with clichéd horror settings and gameplay call-backs to earlier moments in the series as a whole. After the promising setup of Barry’s chapter at the end of Episode 2, it is instead Claire who provides the most enjoyment in this entry.

The revelations kept on coming during Episode 2; Claire and Moira made their way to the Overseers tower, meeting Natalia along the way just before she was kidnapped by an unknown assailant. 6 months later, Barry’s chapter closed in the most compelling finale thus far – the Overseer, revealed to be a mutated Alex Wesker, cornered Barry and Natalia as they entered her tower. What happened to Natalia during those lost 6 months? What is Wesker’s endgame? Rather than dragging it out until the finale, these questions and more are answered over the course of Episode 3. Claire and Moira have arrived at the Overseer’s tower, only to find a note telling them to go to a factory of the meat packing kind, naturally. This area proves to be the most puzzle heavy in Revelations 2 thus far, which is rather disappointing given the ease of completion. Descending into the bloody bowels of the slaughterhouse is tense, but this section really delivers when trying to leave; enemies are flooded into the area and the most prudent method of escape is simply running and evading rather than wasting ammo and items. It seems when Capcom dove into their bag of tropes, along with a slaughterhouse they also pulled out a sewer level, the next stop for Claire and Moira. I was expecting plenty of new aquatic enemies to tangle with and was left disappointed as I faced the same old Afflicted I’d been tackling up to this point. A few more puzzles later and Claire and Moira are ready to ascend the tower, blissfully unaware of what I would consider the first major boss encounter of Revelations 2 thus far. The fight itself is no revelation, relying on baiting attacks to ensure the boss harms itself on environmental hazards rather than bullets. A ‘moral choice’ moment comes shortly after which will hopefully reverberate throughout Episode 4, just prior to Claire and Moira’s long awaited ascent. The promise of bad-assery during the closing moments of Barry’s Episode 2 chapter is not lost here, as he quickly gains control of the situation and extracts both himself and Natalia from the clutches of mutant Alex Wesker. What follows this exhilarating opening however is an over reliance on partner switching during an uninspired re-tread through the now drained sewers and a bevy of box maneuvering in an abandoned mining facility. I hesitate to describe this section as a puzzle, as puzzles generally require some kind of mental exertion, whereas Barry carrying a large battery from Point A to Point B instead whiffs of busy work. A two part boss encounter breaks up the monotony briefly, only for the chapter to end rather abruptly in a short cutscene. While satisfying in terms of the overall narrative, the chosen end point definitely feels arbitrary and another short section of exploration akin to the final area of Chapter 2 would have been far more exciting. If you haven’t already made the jump and bought into Revelations 2, it might be best to wait and see how it all pans out in my review of the final episode next week.