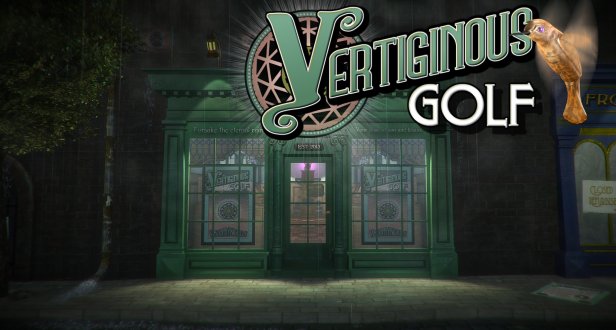 So as far as strange premises for a video game goes I think I have stumbled on the Jackpot. Vertiginous Golf is a mini golf adventure with a deep back story and is set in a steampunk dystopian universe. No I am no joking and no I am not consuming illicit substances. It is the type of game premise that commands attention simply to see what the hell a game like this actually plays like.

Luckily the answer is quite well. The game is, at it’s core, a minigolf game and it has all the bells and whistles that mingolf can offer (except I haven’t found a giant clown laughing at me yet). The strange setting has allowed for a few alterations to the basics though. For starters I could change clubs between a chipping wedge and a putter which increased the amount of shot options I had. There is also the ability to rewind shots and alter their trajectory by using a limited supply of special power.

There is multiple ways to play Vertiginious golf too. There is traditional singleplayer and multiplayer modes that follow standard tournament setup, a practice mode that allowed me to perfect holes I was struggling with and a story mode that forced me to find scattered sound clips before I could finish the hole. There is also a really robust create a hole mode that was fairly easy to use. This mode allowed me to share my creations with players everywhere and it means that as long as people are playing the game I should have access to an unlimited supply of new holes.

Perhaps the biggest problem I have with the game is its difficulty. The game plays well but the slightest error can have grave consequences. Getting par on even the easiest of holes was an achievement worth celebrating. This difficulty is partly due to the challenging courses but it is also due to the very touchy controls. I gave up on using a controller after two holes as it was just impossible to get the fine movement the game requires. The mouse and keyboard are a better option but in no way an easy one. This difficulty lead me to rejoice when I finally managed to finish a hole under par and that feeling was the best I experienced in my time with the game.

But difficulty issues aside Vertiginous Golf is a good game that will only get better as the community gets behind it. The unique setting demands your attention and if you have a love of tough games then you might find yourself in steampunk heaven. One thing is for sure though, in the world of dystopian steampunk minigolf games Vertiginous Golf rules the roost.