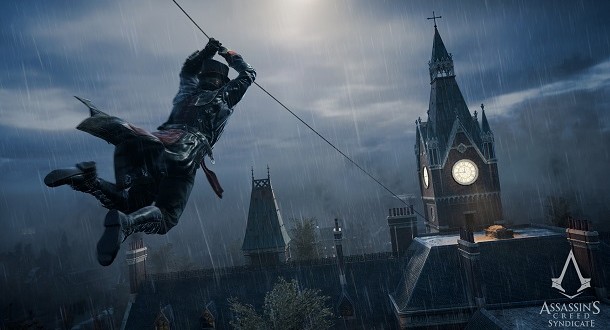 Another year and another Assassin’s Creed game. I am something of a fan of the series in that I play all of the entries and usually get some entertainment out of them. For me they are usually that Sunday afternoon game that I gradually work my way through, eventually making it to the finish. I am however hardly a hardcore fan and can recognize the serious issues the franchise has had in the past. Thankfully though Ubisoft have taken on board the serious dislike for Unity and, I am happy to report, created one of the best Creed games yet.

The biggest change on the surface with Syndicate is the inclusion of two playable protagonists, twins Jacob and Evie Fry. Jacob is a brash punch-to-the-face type of guy while Evie is the kill-from-the-shadows type. Both characters were available to me and I could freely switch between them in the open world. The two characters are both fully fleshed out with tonnes of personality making the both of them incredibly satisfying to play as. Jacob is charismatic and funny while Evie is mysterious and driven. The combination works well and is a refreshing change from Arno’s duller-than-cardboard personality from Unity.

As for the gameplay things have taken a wonderful turn for the better. Unity was chock full of busy work that did nothing but extend my playtime but Syndicate keeps things precise and entertaining for the entirety of the game. I know it is a strange comparison to make but the structure is very similar to that of a Saints Row (with less purple sex-toys and more cholera) with activities used to take over gang territory. Once enough territories were taken over I could initiate a gang war and claim the entire region. It is a simple system but it is implemented well and I had just as much fun completing these tasks as I did the main missions. As far a general mechanics are concerned the newest addition to the franchise is the grappling hook. This device is a dream to use and while not quite a nimble as the grappling hook from the Arkham games it is certainly much more exciting than the same slow climbing I have been doing for years now. No more tedious climbs to the top of synch towers for me! I sincerely hope that the grappling hook features in every Assassin’s Creed game from here on out because it removes a huge amount of tedium from the gameplay.

Speaking of main missions Ubisoft have come up with an exciting collection of story and assassination missions, most of which have multiple ways to complete. The assassination missions in particular offer varied paths to success. In one mission I could bribe an abused staff member to give me the house keys, take the place of a cadaver or simply kick down the door and start killing everyone in sight. All three options allowed me to complete the assassination so it was up to me on how I felt like approaching it. This is a wonderful improvement on the Creed formula and adds an extra level of depth to proceedings and one that reinforced the feeling of roleplaying as a master assassin.

Another star of the game is London itself. The Victorian era is beautifully recreated with Syndicate hitting all the notes I expected. Steam boats, trains, industrial pollution, street urchins and pubs abound in the gloriously recreated streets of ye olde London town. What is presented probably has only the slightest links to historical fact, I don’t know, but to me it feels like Victorian England should feel and that deserves a pat on the back. There is also a nice bonus area in the game that is linked to the overarching Assassin’s Creed narrative that is exceptionally entertaining. I won’t spoil it for those that haven’t played but let me tell you that Victorian London isn’t the only part of English history I visited.

My biggest issue with Syndicate is the same issues I have always had with Creed games and that is the controls. There are some strange choices when it comes controlling Jacob and Evie and it makes the experience less fluid then it needed to be. The ability to “run down” buildings makes a welcome return and generally things move quite fluently but the traditional quirks of the franchise are still present. The fact that all interactions are mapped to one button and some dodgy targeting made me want to scream in frustration at times, I mean you would too if you had picked up a body instead of taking the reins of a horse and cart for the 4 time in a row. Speaking of our equine friends I quite enjoyed the ability to cruise around in a horse and cart, it broke up the tedium of getting from point A to point B and there were some nice activities that utilized this method of transportation.

With the exception of the pirate themed Black Flag, Syndicate is the most fun I have ever had with the Assassin’s Creed franchise. It improves on the cluttered, buggy mess of Unity in every way and introduces players to a rollicking, entertaining story that never takes itself too seriously. Despite the occasional control issues I have no hesitation in recommending Syndicate to anyone who has enjoyed the franchise in the past. So if you will excuse me there are Templars to kill and haystacks to leap into. Tally ho!