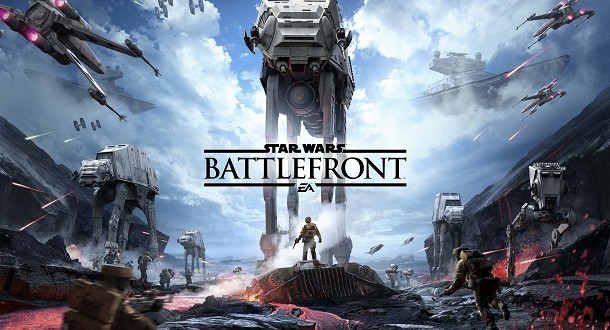 I must admit it has been a long time between drinks when it comes to great Star Wars games. The more recent titles have ranged from the solid-but-not-spectacular Force Unleashed to the downright horrible Clone Wars. In fact the last truly great Star Wars game I can think of is Knights of the Old Republic 2 (which is still getting better even after all of these years) and that came out 11 years ago. So it was with a twinkle of hope in my eyes that I loaded up Star Wars: Battlefront, praying that this is the game that would bring the Star Wars franchise back to the forefront of gaming and reclaim its old throne. Unfortunately it doesn’t quite reach the peak of Star Wars gaming but it sure gives it a good shot in the process.

I never played much of the original Battlefront games, my internet at the time wasn’t up to playing online and there wasn’t much in the way of singleplayer entertainment. This remains true for the 2015 iteration with solo players being almost completely ignored. There are some wave modes and basic tutorials on offer but there was nothing I would keep coming back to. I see this as a missed opportunity because there have been some great singleplayer FPS campaigns in the past (Republic Commando and Dark Forces to name a couple) so I know it could work. But given the last few Battlefield campaigns it is probably for the best that DICE didn’t bother and just focused on what they are good at, the multiplayer.

The biggest worry I had with Battlefront is that it was simply going to be Battlefield with a Star Wars skin. The Battlefield DNA is there but there is no doubting that Battlefront is its own unique beast. The game comes with the standard multiplayer modes like capture the flag and team deathmatch but it is in the unique modes that the game truly shines. One mode see’s teams fighting it out over crashed escape pods, another has players escorting droids across the map and one more has players battling across the map so they can control hard points and take down the enemy base. But there are two real star modes for me in Battlefront and they are Walker Assault and Fighter Squadron. Walker assault is the closest thing to a re-enactment of one of the war scenes from the movies. Players take the role of the defending rebels or the attacking Empire. The Rebel’s goal is to destroy the Empire’s AT-AT Walker before it can take down their base, obviously the Empire wants that base destroyed. These maps are massive and can house of lot of combatants. It is a heady mix of ground, vehicle and air combat that is sure to please Star Wars fans everywhere. Speaking of Air Combat that is the focus of the Fighter Squadron mode. This is simply team death match (with the occasional goal) in the skies. Players take control of an X-Wing or A-Wing for the Rebels or a Tie Fighter or Tie Interceptor for the Empire. The combat is tight and entertaining and while it lacks the complexity of the classic X-wing vs Tie Fighter games it certainly invokes the same feelings. My only wish for this mode is that EA include some extra ships as two on each side hardly seems like enough variety.

Graphically the game is stunning, running silky smooth the entire time. The detail in both the levels and characters had the Star Wars nerd inside me screaming with joy. Everything feels like it is straight from the movie and I am sure that DICE spent many thousands of hours ensuring just that. I can see myself using this game as a showpiece for non-gaming friends as proof of how good a game can look.  The sound is equally impressive but to be fair stuffing up the sound in a Star Wars game isn’t really an option. All the sounds are taken straight from the films and the open theme music is as stirring as ever. There is some nice surround technology going on in the background and even on my modest sound bar it impressed. DICE have really nailed everything it means to be a Star Wars game with this one.

Perhaps the biggest problem with Star Wars: Battlefront is one that won’t really ever affect me. The game lacks some complexity and longevity in the meta game that is sure to put off the Call of Duty and Battlefield faithful. There are plenty of unlocks and options for most casual shooter fans (such as myself) but for those that spend weeks upon weeks with these sorts of games they could find it a little light on. The reverse side to this however is that occasional players can still jump in without feeling they have been away from the game too long and enjoy it. Something that is hard to do in a Battlefield match.

Star Wars: Battlefront is a really good shooter that could have benefited from a meaningful single player component and perhaps some added depth. That it is the best Star Wars game for years is not really a massive achievement but the fact it can stand shoulder to shoulder with the shooter elite is. The game caters to the casual player much better than most and is welcoming to even those with the most basic of FPS abilities plus the addition of a Starfighter mode will be something I am grateful for until a proper X-Wing game gets a release. Really Star Wars: Battlefront is in a lot of ways just like the Star Wars movies. Spectacular visually, a little bit shallow at times but in all a whole lot of fun and really what more could anyone want in a galaxy far far away.