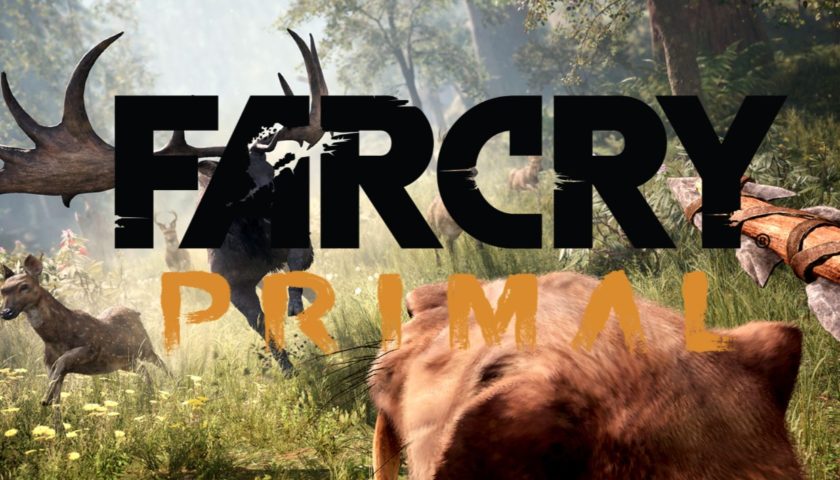 I have always enjoyed the Far Cry series. Despite becoming a little formulaic in recent entries, I still find that very formula highly entertaining. The thrill of surviving in a hostile environment while gradually taming both opposing military regimes the hostile fauna is something that makes for compelling gaming. So I took the announcement of Far Cry Primal with a raised eyebrow. I was more than a little apprehensive about what the 10 000 BC setting would do you my favourite formula. Could the game survive a lack of firepower and modern themes?  Would I find enjoyment in using spears and clubs? Could I get through a Far Cry game without radio towers to climb? Thankfully the answer yes but there are one or two caveats.

I honestly had no idea what to expect going into Primal but after a short introduction I was back into the Far Cry groove. There are a lot of familiar aspects to Primal such as capturing outposts and crafting upgrades so I instantly felt at home. This is perhaps both a blessing and a curse. There is no doubt this core gameplay loop that has been the basis of Far Cry since the third entry is entertaining but I would have liked it if Ubisoft took some more chances, especially considering the unique setting. The lack of technology changed how I approached this staple set of tasks but in the end they were essentially the same things I have been completing since I first encountered Vaas 4 years ago.

While there have been few changes in the mission types and side tasks there have been some significant changes as far as combat is concerned. The obvious lack of technology has forced the focus onto melee combat with spears and clubs being my main methods of attack. There was also a bow which was great for sniping but with so many enemies rushing at me there is no doubt that having a good spear was the way to go. This focus on melee combat adds an extra intensity to Primal that wasn’t in the previous games. Surviving is a tougher task all round. It is one thing to take down a charging wolf or an enraged bear with a high powered assault rifle, it is another thing entirely to do so with a stick that has pointy bit of rock on the end. As a result the game feels much more difficult but that extra difficulty has added to the level of satisfaction I felt when I completed missions or took down a particularly nasty predator. Far Cry Primal went out of its way to enforce the fact that I was no longer at the top of the food chain and the game is better for it.

The biggest change to the game however is the Beastmaster abilities. These abilities allowed me to train the wildlife to do my bidding and it certainly changed the dynamic of the whole game. The first animal I could train was an owl that would scout out terrain for me, marking and identifying potential threats. As the game went on I could train my owl to attack and even carry bee hives to drop on unsuspecting enemies. As my beast master abilities improved I could eventually train everything from wolves to mammoths, bringing one animal along with me at all times as back up for any trouble I might find myself in. You wouldn’t believe how easy conflict resolution can be when you have a tame Sabretooth Tiger at your side. These trained animals could be called upon to attack or defend with basic commands and they could be swapped out at any time with any other animal I had previously trained. This added an extra element to the game because I felt compelled to train (achieved by using bait and then soothing the wild beast) all of the available animals. Gotta catch them all as the saying goes. The bigger animals could also be used as a mode of transport once I had unlocked that ability, making traversing the large map a much quicker process.

This brings me to perhaps the biggest problem I can find with the game. Previous entries in the Far Cry series have made a name for themselves with solid stories and outstanding villans. Both the deliciously psychotic Vaas and frighteningly calculated Pagan Min are well and truly members of the video game villain hall of fame. Sadly Far Cry Primal lacks any characters of this level and the entire story suffers because of it. The tale of the Wenja (the tribe of people the main character belongs too) could have been quite interesting but as it is I found it hard to care thanks to a lack of a defined “big bad guy” and a lack of clear goals apart from survival. I always find in open world games that a good story is the difference between a good and a great game and unfortunately Primal’s undefined tale is likely to mean the game is forgotten 12 months from now and not remembered as a classic in the genre.

In all however I can’t be too upset with the game. There is a lot of fun to be had here with a solid (if familiar) core, an interesting time period and some unique and entertaining abilities on offer. The ability to control a vicious bear or ride a mammoth is almost worth the price of admission alone. The game is held back by the overly formulaic nature of what it is to be a “Far Cry” game and the lack of memorable characters but in all there is a lot to like about Ubisoft’s dip into the dawn of man.  If you are looking for a solid open world FPS adventure you certainly could do a lot worse, just know you may forget about the experience shortly after it is completed.