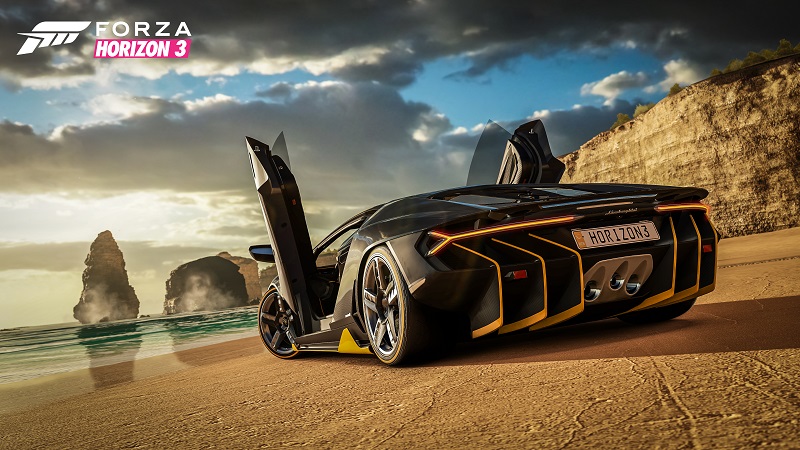 To say I was excited for Forza Horizon 3 would be an understatement. For a long time, I thought that the second entry was the best game available on current generation systems. The racing was pitch perfect and the festival setting was inviting to all level of players, not just hardcore car fans. It made the sometimes daunting racing genre accessible yet had enough depth for those that like to make sure their gear ratios were just right. Most of all the events were universally entertaining making Horizon 2 a must buy for people with an Xbox One. So when Forza Horizon 3 was announced I was immediately on board but the real kicker was that this time around I was going to be able to burn through some of the most iconic locations in my own country, something that I have never been able to do previously.

That simple pleasure is something I cannot overstate. I know it might be old hat for people that live in New York but to be able to play in a virtual recreation of places that I am familiar with is something special. Driving past the Byron Bay Surf Club, hooning along the cliff road between Wollongong and Sydney, weaving in and out of traffic on Surfer’s Paradise. These are all locations I know quite well and Forza Horizon 3 captured them wonderfully. In fact the game captures Australia better than most movies do. The roads, the buildings, hell even the fact that there are Red and Yellow lidded Sulo bins out the front of the houses. These little details might not be noticed by people that don’t live in our wild land but for those of us that do they are a real treat. About the only problem I have with their recreation of Australia is the map. What the devs have done is picked these iconic locations and smashed them together to form the drivable area. I don’t have a problem with that, after all Australia is a massive country, the issue is that the map seems random and doesn’t relate to where these locations are in real life. For example, Byron Bay is southwest of the 12 Apostles and the Yarra Valley is somewhere in the middle of the country. I don’t think it would have been hard to keep these cities and landmarks in roughly the same spot as the real map.

This time around I was the boss of the Horizon festival, letting me take charge of a few things along the way. This meant two things, the first was I didn’t have to listen to that annoying git from Horizon 2 and secondly I could set my own race conditions. This feature is wonderful and it allowed me to play the game how I wanted to, not how the developers wanted me to. I could set classes, restrictions, manufactures and much more, allowing me to tailor the game to my desires. What was even better is I could share these races that I setup with my friends and they could attempt to better my times. It would have been nice to be able to actually set the course for my races but really that could be just me being greedy.

Community is super important in this title with the whole game being built around the concept of friends joining in. Not only was there a leaderboard for just about every stat I could think of but the Drivatar concept is once again back in full force. I am not 100% but it appears to me that Drivatars this time around are much more challenging opponents and make a real fist of any events they are driving in. I also loved that fact that outside of events I could easily create a convoy of these Drivatars, following me where ever I went making the whole process of getting from point A to point B in the open world much more entertaining.

Horizon 3 is also a part of Microsoft’s new PC/Xbox philosophy with the purchase of the game giving players a PC and Xbox One copy with shared saves. This is something I wholeheartedly support as it suits my domestic situation perfectly but it also allows a whole host of new PC players to get in on the action as well. I did have some issues with getting the PC version to run (turns out it didn’t like my Anti-Virus) but once it was going it all worked perfectly. My humble 970 was more than up to the task of running the game at high detail levels (not Ultra) without dropping frames. I can only imagine how good it looks running on a 1080. But even if you only have an Xbox One you won’t be disappointed with how the game looks. It is a real treat and a significant upgrade from Horizon 2 (which was stunning to begin with). This really is a visually impressive game, no matter what system you play it on.

All of this wouldn’t mean much if the racing and gameplay wasn’t up to scratch. I am more than happy to report that this isn’t the case. It takes the wonderfully entertaining racing from Horizon 2 and polishes it until it shines. To me, the most important element of a racing game is the feel of the cars. Each ride needs to be unique and Forza Horizon 3 achieves this with ease. What is even more wonderful is how the game caters to racing fans of all levels. If I just wanted to go fast in a high powered super car I could but I could also get down into the nitty gritty details for things such as the angle of my spoiler if I had the desire. This really is a racing game for everyone as it can be tailored to everyone’s skill level and knowledge of cars.

Really Forza Horizon 3 is everything that made Horizon 2 great and then some. There are more options, greater chance to customize, better graphics, better community interaction and even more entertaining events. Add to this a healthy dose of national pride for Australian gamers and I can honestly say that this is a must buy title for anyone with even a remote interest in automobiles. Forza Horizon 3 takes car dreams and makes them a reality. After all what other game encourages you to do doughnuts in a Surfers Paradise carpark in a Holden Torana?