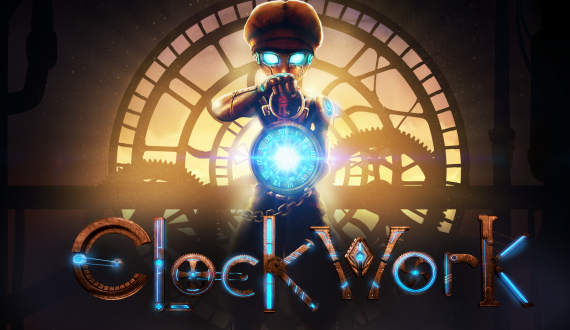 As an Australian site, it’s always a nice feeling when a homegrown title finds its way into our inbox. By way of Steam Greelight comes Clockwork, a puzzle platformer from Sydney publisher Gamesoft that combines a steampunk aesthetic with a time-looping mechanic that doesn’t overstay its welcome.

What struck me most about Clockwork is the world that developer Appsquare have created and the hand-drawn artwork that brings it to life. Four hundred years prior, the city of Watchtower was born when a plague wiped out human civilization. The only survivors were those who imbued themselves within mechanical bodies in a bid to achieve immortality. The story centres around Atto, who underwent his mechanical transformation as a young boy and has spent the past four centuries repairing the increasingly decrepit inhabitants and machines of the city. Whilst enduring another day of this lonely existence, Atto encounters Milli, a mechanical spirit that grants Atto the ability to jump backwards in time and watch echoes of his actions. Milli tells Atto that she must reach the highest level of Watchtower, the Crystal Heights, in order to help revitalise their world.

Following this engaging premise is a journey through sixty levels spread across the three areas of Watchtower filled with puzzles that combine platforming elements with the aforementioned time-looping mechanic. These areas; Grindtown, Poisonville and Crystal Heights, all have distinctive designs with varied colour palettes that help relieve the repetitive nature of some of the puzzles. Clockwork suffers from the same issue that many puzzle platformers do in that there is often a significant delay between knowing what you need to do to solve a puzzle and physically being able to execute it in the game. For example, Atto might need to ascend a ledge that is out of his reach. This involves creating a time-loop point, grabbing a metal crate and holding it up for long enough that when the loop-point is restored, Atto’s time echo doesn’t disappear before his present version can leap from the top of the crate to the ledge. Apart from Boss areas, levels do not contain checkpoints which in more difficult sections can become a massive source of frustration if Atto misses a jump or glitches through the environment, something that happened to me a few times during my playthrough. Exacerbating this are some excruciatingly slow animations, most notably when pulling the many levers dotting the levels that control doors and platforms, made worse when an enemy is bearing down upon Atto.

That said, Clockwork doesn’t outstay it’s welcome, wrapping up in 4-6 hours depending upon the puzzle solving skills of the player. Despite some minor frustrations with the gameplay, I found it to be a very aesthetically pleasing experience with polished characters and some gorgeous background art. I also have to make special mention of the music which shone above some of the sound effects that became very grating after hearing them numerous times (Atto’s death scream is the stuff of nightmares).

If you happen to be a fan of puzzle platformers, I’d suggest giving Clockwork a few hours of your time. While not exactly revolutionary in terms of mechanics, I found it struck a nice balance between challenge and reward often enough to make up for some irritating levels.

Clockwork is currently available on Steam, with plans for release on Mac, Android, PS4 and Xbox One.