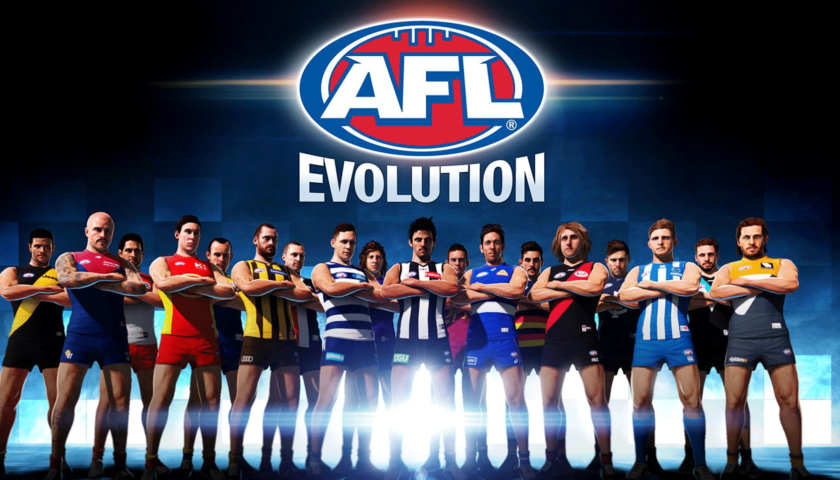 Reviewing a game such as AFL Evolution is a tricky experience for someone such as myself who fancies himself of having a fairly deep, intimate knowledge of the sport being represented. It’s difficult to look at a virtual representation of that sport and not exclaim “That’s not the sport I know and love”, and it’s also extraordinarily difficult for a developer to create a simulation that is fairly representative of the sport it aims to replicate – AFL being one of the tougher codes to recreate. For these reasons stated above, I’ve taken pause, on several occasions whilst preparing this review to ensure that I approach it with as clean a mind as possible… oh who am I kidding… AFL Evolution is just a few kicks short of a Grand Final.

By design, AFL Evolution is intended to be a simulation, and in this regard it fails miserably. If you placed AFL Evolution in front of a foreigner, someone who had only just been witness to a real life game of AFL Football, they’d undoubtedly be confused. Modern AFL is a fast paced, ever evolving game – teams play in zoned formations, team defence is key, while players who can break the lines add incalculable value to a team. Unfortunately, if you wish to replicate the modern game then you’ve got another thing coming – the football you will play is more akin to old school man-on-man footy. Should you opt into the career path, and create your own rookie, the issue you will face is that your player is mapped to a certain portion of the field and the game conspires against you to ensure you remain in that region. After creating Paul James, the aspiring Full Forward for the Geelong Falcons I looked to get around the ground and get my hands on the ball at any opportunity, but in the event of any free kick or speckie you’re immediately thrust back up the ground, away from the play.

Career mode itself can play out from a number of different perspectives; the aforementioned Player mode, you can assume the role of a coach and determine the future of a team and lead them to a premiership, or take over a team and play in a more conventional fashion. The latter of these choices is the standard and will certainly be the most appealing to most players. In this mode the player you on control is the one closest or in possession of the football, and effective linking up with the ball will ensure you maintain possession. After only a couple of matches most players will be ready to tackle a match at least at the default medium difficulty, but there will still be some facets of play that might take longer to grasp. Even having played dozens of games, the art of marking the ball seems to have still eluded me, and instead of marking the ball myself, I’d allow my defender to spoil the ball and crumb the ball once it hit the ground. This approach certainly made for a faster experience but was also a very cluttered, cumbersome, messy one.

Players can get injured and suspended for indiscretions, but once you’ve mastered the art of play, it won’t really matter who is in your team if you want to succeed. The variability in the player’s rankings rarely have enough bearing on their ability to dispose of the ball, and as such a team full of rookies will have every chance of success, even if they’re playing against the top ranked teams in the competition. Online play is fairly solid, with plenty of players out there to play against setting up a match isn’t especially difficult, but given how random the outcome of a one on one contest is, there’s not an enormous amount of fun that can be derived from this experience.

If you can excuse the fact that playing AFL Evolution is more like a crazy, arcade take on AFL than a simulation of the modern game then some fun can be had here. I loved seeing the scoreboard at the end of a game and seeing that Tom Hawkins, Paddy Dangerfield and many of my other beloved Geelong players had all clawed up 40+ disposals and 10+ goals apiece, but the fun began to evaporate as this feat repeated on a game by game basis. Poor collision physics also mean players can escape a tackle with relative ease, and more often than not you get a second chance before a successful tackle is laid upon you – this is a bit of a head scratcher.

While many aspects of AFL Evolution are quite dated; the commentary from Dennis Cometti and in particular Matthew Richardson is terrible, is often horribly inaccurate and is repeated multiple times in the space of a minute, and the general visual quality is quite reminiscent of early last generation, I must say that I was impressed by the overall quality of the representation of the players. It’s clear that significant time, money and effort has been put in to ensure that marquee players looked as much like their real-life counterparts as possible, and even the comparative lesser-lights looked enough like the real-world player to impress me. Of course there are a few strange inconsistencies but as a general rule, the players have been replicated on screen quite well. What’s also impressive is the presence of the newly established AFLW, a competition that has only been established for a few months – it was great to see that competition appropriately represented in the game.

It’s important that we look at AFL Evolution through a different lens to the one we look at the likes of FIFA, NBA 2K and Madden through. AFL isn’t nearly the size of those other sports, and gets a proportional amount of financing as a result. It’s consequently much harder for a truly accurate simulation of what is already a very complicated game to be developed, but I applaud Wicked Witch for their effort. Come at AFL Evolution, knowing that it’s not a great sim, but a ridiculous and silly arcade representation of the greatest sport in the world, and you’ll likely come away happy – as I have – just don’t expect the world from it.