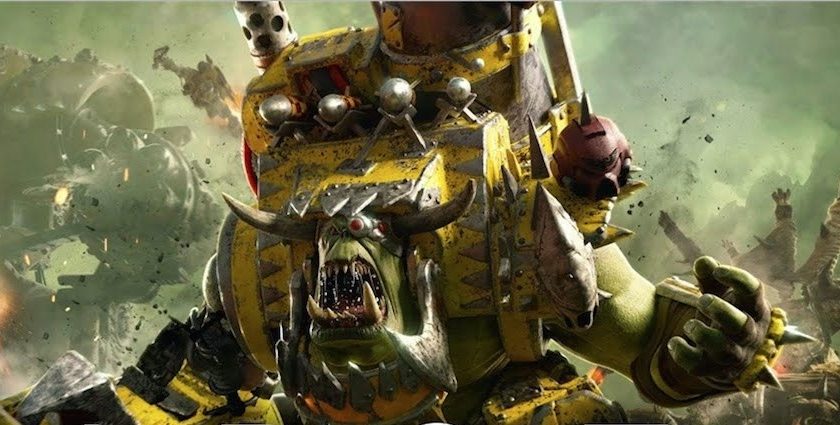 Last night a few members of the Player2 team got together to test out the multiplayer in Relic’s latest release, Dawn of War 3. For those unfamiliar with the series, it is a real-time strategy game based in Games Workshop’s Warhammer 40,000 universe. Now it is important to note, this is a first impression, based on a few games of the MP that I have played as the Space Marine Faction.

Faction-wise the game feels a bit light on, with only the Space Marines, Eldar & Orc factions being playable. That said within each faction is a quite a large selection of different battalions, which simply boil down to being a different colour variant, or if you want to recreate that tabletop experience, you can always make your own battalion and colours.

So while Matt & Ken were setting up their recording setups, I was busy making the fiercest battalion in the space world, The Barrys… and Boy did the Barry’s deliver! More on that later though. It’s important to note that I probably should have been setting up my skype instead of painting virtual space marines, because communication in game, is a tricky business.

So tricky in fact, we were simply unable to figure out how to bring up the in-game chat menu. Now I can’t speak for Matt or Ken, but I didn’t look too hard, mainly because I was busy stomping the enemy troops into the space dust. But as always, communication with your allies really helps coordinate attacks.

When the game starts, you find yourself with one barracks or general troop production building and a base building/repair minion. For the space marine faction, there is a grand total of  5 constructible buildings, which feels REALLY LIGHT ON for an RTS game. To complement the general troop production building there is a specialised troop building, a vehicle building, an upgrade-your-troops building and then a resource point defense building. That is pretty much it. There were no base defence buildings at all. None. Zip. Zilch. So if you build a forward base you are going to need to keep a standing army in range to defend it.

In terms of combat it’s you usual RTS fare, select units, click on an enemy, hope you win. Certain units, depending on upgrades will have a grenade or flamer unit which is a targetable use item with a cooldown that when used correctly can turn the tide of battle. As well as your general units, each faction has three elite units, that can be called down after a certain amount of elite points have been generated.

These hero units can really turn the tide of battle but they won’t win the game for you single-handedly. They can and will die, but they each have their own elite attacks/abilities that they can do. Whether that is a grenade that slows and damages units, or a power slam attack that knocks back enemies, or for the giant robot Titan unit, a rocket barrage that can be sent to six different locations, or just one if you really want it dead.

Each of these elite units also has a level up system which can be used to unlock new moves, skins or even new elite units. As I am still very early days with the MP I am yet to unlock any new abilities or paint schemes, but from looking at the locked elite units, a fully jacked player is going to have a HUGE selection of units to outfit their battalion. In order to call in these elite units, you need to generate elite points from either capturing an elite point generator or by killing your opponents elite units. This puts a real onus on you to withdraw your elites from battle before they are lost, as to not give your opponents free elite points.

In order to win the game, you need to destroy the enemy’s power core, pretty standard stuff there, but in order to do that, you need to take out their turret, a long range artillery style weapon that can only be blown up after its paired shield generator is destroyed.

Basically, a three step process. Taking out the enemy’s long range turret is a top priority because that thing will tear your troops to pieces.

Even though my current experience is limited to the space marine faction and playing against AI players, I am enjoying it immensely. It has a real Dawn of War 1 feel, but with the hero units from Dawn of War 2 added in for good measure.

There are a decent amount of available maps for 1v1 battles, however for 2v2 or 3v3 there is only a handful of maps available. I would like to see some base defence buildings added in, as if you happened to get caught with your pants down, it’s pretty much GG. As it is though the game seems to have a very solid base for its multiplayer adventures going forward.