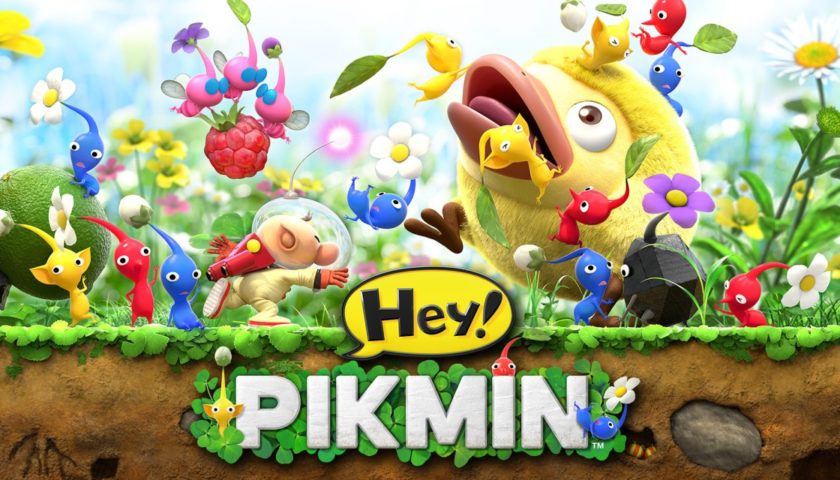 We’ve not seen an entry in the Pikmin franchise since 2013’s Pikmin 3, one of the best games of that year, so when speculation began to swirl about a new Pikmin game courtesy of a quote from Shigeru Miyamoto, many thought Pikmin 4 was on the way. What we got however when Hey! Pikmin was announced in September 2016 was a spin-off title that stars Olimar, and the Pikmin but played very differently. Where Pikmin was a top down, action platformer with resource/time management and light strategic elements, Hey! Pikmin is a side-scrolling platformer that features a simplified version of those core Pikmin mechanics. Do the changes

After I had spent an hour or so with Hey! Pikmin I came to a conclusion; I was enjoying myself, I felt like I was being challenged, but the heart wasn’t there. Something has been lost in the transition from the core Pikmin experience to what we get in Hey! Pikmin, and whilst I still enjoyed what I played, I struggled to find myself invested emotionally – I attribute this largely to the different gameplay approach and lesser visuals of the 3DS. Having now completed Hey! Pikmin my thoughts have consolidated further.

The tale of Hey! Pikmin is a fairly typical Pikmin one. Captain Olimar (who must be the worst pilot in the world) has once again crash landed on a mysterious planet, a planet that is conveniently home to Pikmin, as well as a whole host of other devilish creatures. Olimar and his new Pikmin friends need to compile over 30,000 units of Sparklium in order to refuel his vessel so that he can leave, and return home. Aside from the very helpful Pikmin, the planet’s inhabitants are out to kill you, and while they rarely pose much of a threat to Olimar, it won’t take much for them to wipe out your colourful allies.

The vast majority of Olimar’s abilities/inabilities have translated to this 2D iteration of Pikmin. He still cannot jump, but he can toss Pikmin to out of reach places to collect Sparklium out of his range, he also has a jetpack that he can use for a few seconds that can propel him to some areas that only he can reach. The Pikmin are handy in a pinch, they can be tossed at threats to take them out while, Red Pikmin are resistant to heat, Yellow Pikmin conduct electricity, Blue Pikmin will join you underwater, Rock Pikmin can bash through crystal barriers and Flying Pikmin can protect you from pitfalls. Pikmin are easily discovered as well, unless it’s a cutscene (where you’re typically greeted with an endearing introduction to the critters) you’ll find them hiding in thick reeds or behind large rocks and with a quick blow of Olimar’s whistle they’ll scurry over to join your ever-growing team.

The controls of Pikmin are awkward, jarring and needlessly complex. Olimar moves with the left control stick, but every other function is mapped to the touchscreen, this includes the direction you intend to throw your Pikmin, your whistle to summon them, and your jetpack. It’s quite cumbersome and makes an already slow paced game much slower, and if you’re playing with a larger 3DS model, then it also becomes quite taxing on your wrists. Hey! Pikmin also wants you to replay levels, whether that is to add to your growing Pikmin collection, to collect more Sparklium or to track down the numerous secrets hidden within. With all these extras available to you, the sleep-inducing pace you move at becomes a significant barrier to entry for anyone looking to uncover everything that each level possesses.

I spoke of Hey! Pikmin not eliciting the same emotional investment from me as previous entries have. In past Pikmin games I felt connected to my army of plant-like friends, and when I’d perhaps been too bold sending a group in one direction to collect a certain object, and things suddenly got a bit dangerous, I’d drop everything I was doing and bring my entire troupe over to assist in digging that small party out of the sticky situation I’d gotten them into. The relief I’d feel if I could save them, or the despair resulting from the loss of my allies, motivated me to improve and play smarter in the future. In the case of Hey! Pikmin, there’s no delegation of responsibility given the nature of this franchise entry; you’re all in it together, and that shattered my connection with my team, everyone suddenly felt expendable.

Hey! Pikmin looks to do a few things differently, and it results in an enjoyable, if simple puzzle-platformer than rarely challenges and failed to resonate with me. I love Olimar, I love the Pikmin, and the multitude of pathways available to me in the game is fantastic, but slow pacing, clunky controls and the inability to send my party off in different directions to do different jobs results in a Pikmin game that doesn’t hit the mark as other games in the franchise have. If you’re a diehard fan of the franchise then it’s still worth picking up, but don’t expect Hey! Pikmin to be a step forward for the series.