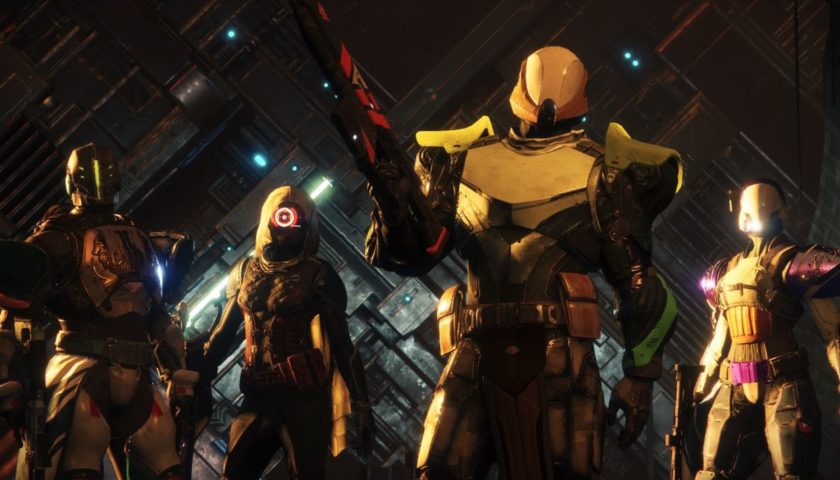 Date With Destiny – We Are Legends

Everyone has that one bright spark in the darkness.

For me, it was my brother who tugged at my mother’s arm and begged her for a Super Nintendo. Christmas 1992 saw the first video game console in our house, and I owe my love of video games to him.

I worshipped the ground my brother walked on, and thought he was the most amazing person in the world. But out in the real world, I was years, levels, behind him. I was the daggy younger sister in hand-me-down maroon shorts. I was the kid still learning how to count to twenty in German and tie my shoelaces without using bunny ears. I was the brat who wanted to make a princess fortress out of his Lego starship base, and who played the dorky Michelangelo to his heroic Leonardo.

But in video games, we were more than friends. We were comrades. Neither of us could really claim that we completed Super Mario World – we defeated it together. When we rented the latest beat-em-up from the video shop, we drilled through versus modes together to help him succeed in the single-player campaign. I worked through A Link to the Past, copying down all of the dialogue as if it was sacred words of wisdom for my life. Meanwhile, he searched through old issues of Nintendo Magazine System for strategies to find all of the heart containers so that he could show me where to look. We graduated to a Nintendo 64 the year that my brother graduated from school, and spent his Schoolies break playing through Lylat Wars.

We had our own language of play, our lexicon of belonging. Together, we were legends.

Beyond the usual criticisms of Bungie’s lore-building or class balance, I wonder if what we are craving from Destiny 2 is that sense of belonging, and we are all seeking it in different ways. For some, they find little value in acquiring legendary gear without being able to share their achievement with their friends. For others, there is a sense of karmic balance in helping a struggling Level 7 player who turned over a rock and accidentally faced a patrol mission beyond their skill. And there is the inevitability of joining friends or strangers in the Crucible for cooperative and competitive matches. However, all of these contributions are not only meaningful and rewarding to you, but have the potential to be rewarding for other players in the game.

Zavala says that, as guardians, “we are never stronger than when we stand side-by-side in battle.” And now, in a world that is slowly being infected by its own plagues of darkness, Destiny 2 gives us a reminder of the value of fighting together, helping each other, and sharing our success. It is a timely reminder that we are never alone – even when we feel like we are, there is always our Ghost at our side, or another avatar around the corner. It is this sense of engagement that subconsciously reminds us that our actions and contributions impact more than ourselves. In a cultural climate that is still struggling with aspects of privilege, the notion of acceptance, and Kant’s Categorical Imperative of “doing what’s right because it’s the right thing to do”, we know that we all have the potential to be a light in someone else’s dark moment.

Things change, as they always do. My brother moved out of home when I was in my late teens, but not before showing me a game called Marathon on our old family Macintosh computer. I played the game religiously, determining the best strategies for conserving bullets, but I played it alone. For many years, I played games alone – it was an easy escape from my anxiety to have so many amazing adventures to remember, even if I was too scared to go and experience them for myself.

It was my brother who desperately encouraged me to play the first Destiny game. I know I was not very good at it, but that was not the reason that I played it. The reason that I loved Destiny so much (and, by extension, the reason that I am enjoying Destiny 2 now) is due to all of the amazing conversations that I get to treasure with him again. For months after Destiny was released, our family dinners were spent comparing our character stats and equipment. My mother would even join in, mocking us by saying “are you two talking about STUFF again?” It reignited an in-joke, referencing one of our favourite works from our lexicon. My brother loved gloating over his superior Hunter and gear, and every legendary was another shining moment. I think he thought he was competing with me. Even in the first three days of the Destiny 2 launch, he was so excited to tell me that he was already Level 20. I shrugged, and I smiled.

See, it was not competitive to me. The true reward for me was in those moments, when I saw his eyes light up in excitement. My smile was reflecting my inner happiness; I knew that I was finally able to return the favour and bring some light to the one person who I have always looked up to.

Thank you, Monotone Bob. Together, we are legends.