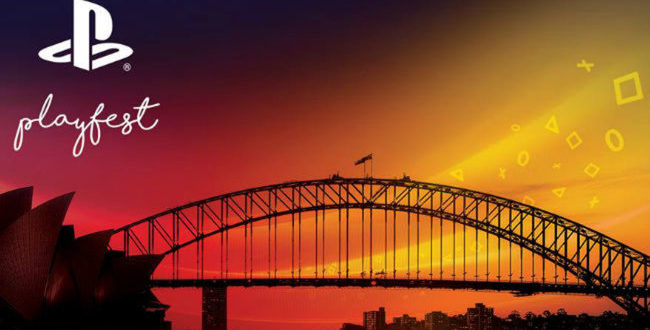 On Thursday I had the delight of attending Sony’s PlayFest 2017. Decking myself out all in blue (Sony’s colours, because I’m a real fangirl… and I just really like the colour blue) I made my way to beautiful Double Bay and walked into what can only be described as a mansion. I know Sony always pulls out all the stops when these events take place, but I was still blown away.

I was given sparkling wine on arrival and told where I could find food (arguably the two most important aspects of any press event) and once I was all set with booze in one hand and a sandwich in the other, I began exploring.

The venue for this event was breathtaking. Amidst the dope beats the DJ was laying down and the cheerful chatter of the other attendees, you could hear the ocean hitting the shore, and look out onto the nearby marina. I took this moment to stand in the sun, sip my wine and reflect on just how lucky I was to be here, whilst other poor shmucks were stuck in an office on such a beautiful day.

But enough bragging, let’s get on with the good stuff.

The event began with a talk from Director of Marketing, Patrick Lagana, who has been with the company for 18 years (an impressive feat in itself). Patrick brought up some exciting milestones Sony has managed to hit over the past few years:

Patrick also spoke about some really awesome things Sony is doing, which I thought spoke volumes about the amount of care they show their player base. The highlights though were definitely:

After the talks were over it was time to get into the games! On show was Shadow of the Colossus, Call of Duty, Crash Bandicoot (my personal hell), a range of PSVR titles and a whole stack of others. What interested me the most, however, were two things: the PSVR games and the PlayLink.

A whole room of the mansion had been set up to showcase the PSVR, and of note were Doom, Skyrim and The Inpatient. Watching people play these was almost as good as playing them myself. Seeing everyone get the crap scared out of them during The Inpatient was fantastic, and seeing people mow down aliens in Doom is always entertaining. However, my personal favourite had to be Skyrim. Seeing that iconic opening sequence in full-scale VR was absolutely amazing. The scaling for this game has been done well; nothing is ever uncomfortably close or too far away. Monsters are suitably sized to freak you right out, and the feedback when you kill something is satisfying without being gross.

What I was most excited about though were the PlayLink titles. For those that don’t know, PlayLink is an awesome new gaming format which uses smartphones as a controller. I can see so many excellent uses for this, but for me, I can see it being so successful at so many parties. A lot of my friends like gaming, but aren’t hardcore into it, so this is the perfect bridge to connect us. I managed to sneak a quick game of Knowledge is Power in before the event ended, and from the brief moments I saw I already know games like this are going to be a huge hit amongst my friends.

Playstation has always reached out to casual gamers successfully, with peripherals and games like Singstar, Buzz and the Playstation camera. PlayLink doesn’t even require a new peripheral, and the games are only $24.95, so they’re a cheap and easily accessible way for people to get into gaming.

Whilst the event was only two hours long, I did manage to squeeze in a lot of fun into that short amount of time. My personal highlights were definitely the PlayLink, Skyrim VR and managing to get Sony’s Director of Marketing to pour me a drink (excellent work Jenn, way to make a good impression).

Sony never fails to put on a fantastic show when they host press, and PlayFest 2017 was no exception. I am incredibly excited about the company’s 2018 lineup and can’t wait for the next event.