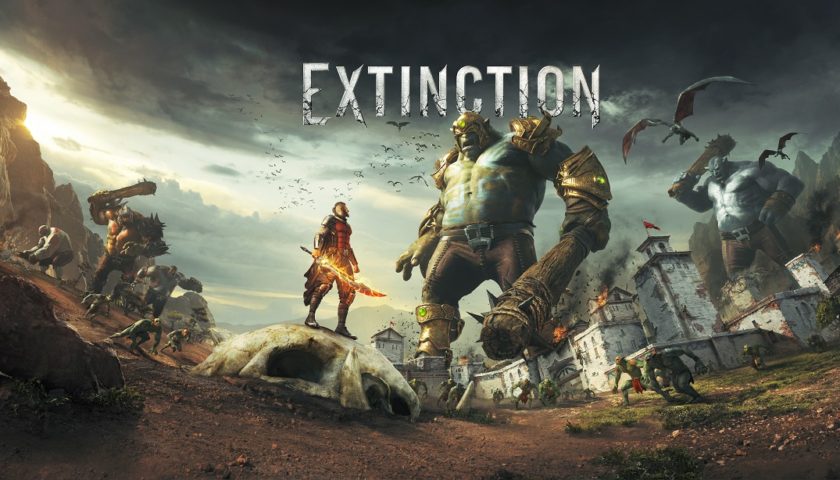 Super cool sword dude versus giant invading orcs. Sounds like the setup for a great game right? Conjures images of epic battles with amazing combat, distinctive special moves and a gripping backstory. Lord of the Rings meets King Kong. This is the exact idea Extinction pitched to me in the opening moments of the game and boy did I want it to succeed. The opening moments even seemed to live up to that promise, with quite the cool cinematic to set up, what I hoped would be, a well-told yarn about humanity fighting back. Sadly it wasn’t to be, because everything after the first hour or so is nothing but a messy disappointment.

The story goes something like this. The giant orcs, or Rivenii as the game calls them, don’t like people much. In fact, they would dearly like to kill the lot of us. Standing in their way is generic sword dude and bland smart lady. Along the way, they are joined by arrogant King and a few other forgettable characters that I cannot remember despite finishing playing the game not 10 minutes before I sat down to write this review. This is the blandest of bland storytelling folks, without a single redeeming element. What’s worse is the voice acting seems like it belongs on a public access weather broadcast and not describing the horrific atrocities committed on humanity by giant green monsters wielding spiky clubs.

I could happily forgive the (massive) problems in the story department if the gameplay was up to scratch, but sadly that is almost as broken. The core concept of the game revolves around killing these massive orcs. To do that I had to charge my character’s strike meter. This was done by rescuing civilians, killing little orcs, destroying Rivenii armour and cutting off Rivenii limbs. Once the meter was charged I could cut the head off the Rivenii with a special attack and the beast would be no more. It initially seemed like a fun activity to take part in with my first few kills giving me a warm glow of satisfaction. But once I realised this was it, the entire game, my feelings soured quickly. Sure there are different Rivenii with different types of armour and there were the occasional “protect the (insert generic building name here)” type missions but in essence, the whole game boils down to this loop of killing Rivenii. Let me tell you it got old quickly.

What’s worse is the actual mechanics are wonky at best and downright rage-inducing at worst. Combat with little enemies is the simplest of button mashing affairs with very little in the way of variety present. There is a pop-up combo, a five-hit combo and that’s about it really. Monotony exemplified. As for fighting the big guys, there is a special attack that must be used. This attack slowed time and allowed me to aim at specific targets on the giant. Bits of armour, locks on armour and limbs can be targets. To cut off a limb, all the armour on that limb needs to be removed first. This is where the frustration creeps in. Aiming while in slo-mo is clunky and it is quite tough to target smaller things like padlocks. This frustration is multiplied by a camera that I spent most of my time fighting with due to its tendency to get stuck on scenery. Throw in one hit kills with dodgy hit detection and you have the perfect recipe for a thrown controller. To get this component of the game so horribly wrong really was the death knell for Extinction. Hell, I am getting annoyed just thinking about it. Movement is another area that had potential but is let down by wonky controls and the terrible, terrible camera. Zipping around the landscape, using a whip as a grappling hook should be a blast, but as it stands it just leads to anger.

There are a few slight positives that are worth mentioning. I do quite like the art style, it looks a lot like that Warcraft adventure game that was never released. Almost like an old-school Saturday morning cartoon. The enemy design is quite detailed too, with the little orcs looking appropriately annoying and the giants appropriately menacing. The environments, while essentially just arenas put together for Rivenii to destroy, fit the setting well and all feel thematically appropriate. But in all honesty there is isn’t many redeeming features in Extinction, this is a game that is its own worst enemy.

Despite a promising setup and some nice enemy design Extinction fails to entertain in any meaningful matter. Once the initial thrill of taking down a giant orc wears off, the games many many frustrations take over and players are left with a mess of half-baked ideas and poor mechanics. The broken camera, repetitive gameplay loop and shallow combat make for a game that is best avoided. It is a shame really, because I love the concept, but there is no way I can recommend this game, especially at full price. Perhaps there is enough fun to be had if it is bought for $10 on a Steam Sale, but if you pay anything more than that you are getting ripped off.