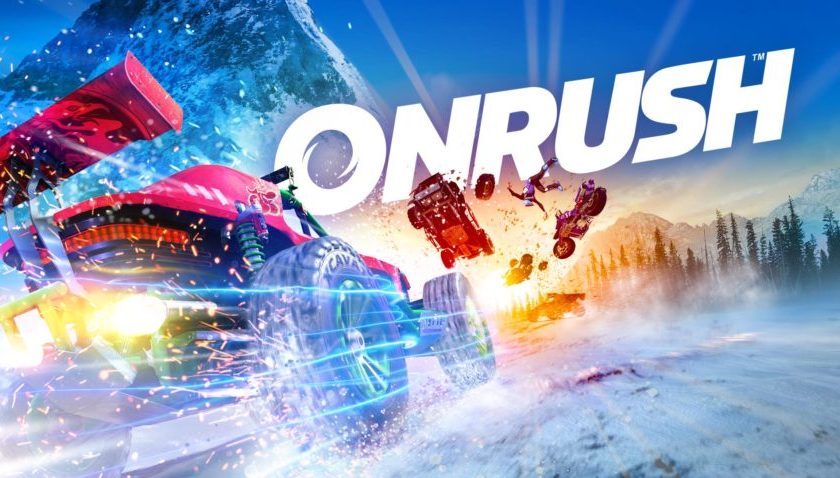 Crazy, over-the-top racers are becoming something of a rare commodity these days. There was a time when we had all the Burnouts, Destruction Derbys, Need for Speeds and SEGA Rallys we could wish for. These games were all about going fast. Forget true to life physics and accurate representation of car behaviour, these games pumped adrenaline directly into your brain.  But then, for some reason, they became a genre on the outer. We were left with things like Need for Speed: Give us more Money Edition and Flatout 4: Bargain Basement. But like a Knight in shiny chrome armour ONRUSH is here to remind us how much fun can be had hurtling around a track, defying physics in the process.

ONRUSH is a different sort of racer. There are no finish lines, no checkpoints, no traditional races. This is a driving experience that has been designed from the ground up with a desire to do away with tradition and bring something completely new to the table. Firstly the race types. There are four main events in ONRUSH, each team focused and each bringing something new to the table. Each of these events are built around the game’s main mechanic, boost. To earn bost players must crash other cars, destroy the AI fodder (AI controlled cars that are super easy to crash), perform high-risk moves  (Like getting air or weaving through traffic) or picking up tombstones that mark the points on the track where other players came to grief. These activities fill the boost meter and allow the driver to become more powerful and move much faster. Ideally, players should be refiling their bost as fast as they are spending it, allowing for the entire match to be completed with the boost button jammed down. Once enough boost has been spent by the player they can activate Rush mode, which will enable a special effect based on the current vehicle and make the car even faster.

The four different events use this mechanic in interesting ways. Each event involves two teams of cars, each team competing towards a single goal. The first event is the most basic. Points are earned by boosting, the longer your boost chain, the bigger the point multiplier.  First team to the point limit wins. The next event sees players racing through gates that appear on the map. Every time you go through the gate a second is added to a timer, first team to run out of time loses. Next is Lockdown, where players need to work as a team and stay in a moving target area for a few seconds to claim it, the catch being the other team is trying to do the same thing, so it becomes a crazy crashfest of teams trying to take each other out. Finally, a mode called Switch, which gives each racer three lives. All players start on motorbikes and each time a life is lost they move up to the next class of vehicle. Once all lives are lost the player takes control of the heavy vehicle class and does their best to take down the opposition. First team to lose all of their lives, loses the match.

Each of these modes has been perfectly balanced and all feel unique from any other racer on the market. It is a refreshing experience and one that is quite satisfying. The game can be played in both single-player and online, the latter being the true star (although there is scope for griefing from douchebag random teammates). The online mode seems to work flawlessly, with a rock-solid net code ensuring lag isn’t an issue. The team nature of the game lends its self wonderfully to a bunch of mates playing together and this will, without doubt, be the mode of choice for most players.  Single player is a little lacklustre however, it is essentially just a string of events to compete in against AI players. It isn’t bad per se, just unimaginative.

In game progression is handled through a loot box system, though one without real-world money involved in any way. Every time a player levels up a loot box is awarded and considering XP is handed out liberally, levelling up is a quick process. This means there is a constant stream of goodies flowing into the player’s profile. All the unlocks are cosmetic too, so there is no advantage to be gained from the loot system. All in all, ONRUSH is at the innocent end of the loot box scale and there is nothing here that should put people off.  The loot gives players the chance to customise the look of their drivers and vehicles as well as add some colourful tombstones and fancy victory dances, all of which introduces a fair bit of personality to proceedings.

ONRUSH features 8 different vehicles to chose from, 2 from each class. The classes start with motorbikes and work their way through 3 different car weights. In the handling department things go just about as you would expect, the bikes are nimble and accelerate quickly but are an easy takedown while the heavies are tough to steer but machines of metal destruction. Perhaps the smartest move the developers made regarding the cars is that they all have the same top speed. This means that all are viable options and encourages players to experiment with all the different classes available. Each of the vehicles also has a unique special move that adds spice to the races. Some drop boost for other players, some create impending walls behind them and some drain boost from the opposition. All powers are well thought out and none feel overpowered. ONRUSH is certainly a well-balanced game from just about every perspective

Perhaps the only real issue with ONRUSH is the lack of tracks. It doesn’t take long to see each and every track in the game and a feeling of repetition sets in quickly. That being said, the courses on offer are great and feature plenty of opportunities for crazy driving and catching some air. The whole game exudes a wonderful 90’s extreme sports aesthetic that really suits the subject matter. The game looks great and runs like a dream. It maintains a constant frame rate and there isn’t a technical glitch to be seen.

With ONRUSH, Codemasters has given arcade racing a shot in the arm. It has taken a tired genre and freshened it up by changing what the goal should be in a racing game. With the omission of standard races and the focus on teamwork this is a type of game that has never been seen before and should be a must but for anyone who gains even the slightest enjoyment from ultra speeds and vehicular mayhem.