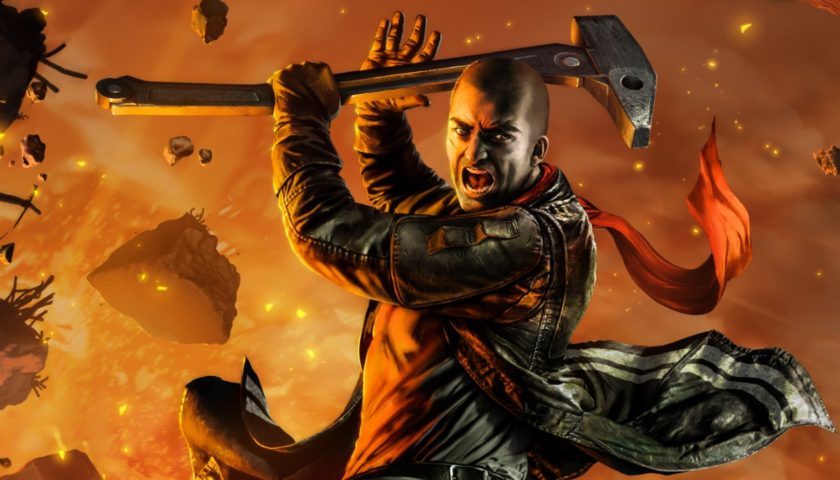 It is funny how some games have a moment that just sticks with you. They might not be the best games of their time, but something about the game just stays in your subconscious. It could be a particular story beat, an amazing in-game vista or even a catchy tune during an epic moment. This single part of the game resonates with you in such a way that the game becomes embedded in your personal gaming history, leaving a memory that lasts a lifetime. One such game for me is Red Faction: Guerrilla and that particular moment involved a truck, 8 remote charges and a whole lot of rubble.

You see in my mind that moment showed me exactly what Red Faction Guerrilla was all about. This was a game that gave me a whole bunch of explosive tools and said: “go for it, get creative!” So I did, strapping explosives to a truck I drove through the wall of an enemy-infested building. Jumping out I bolted, running for my life with bullets pinging around my head. Finally, when I was a safe distance from the building I triggered the bombs. The truck acted like an explosive enhancer, doubling the bang. The building walls buckled and then crumbled. The top floor collapsed, crushing all of those pesky soldiers that were using me as target practice a few seconds before. It was, in a word, glorious. That moment showed me how satisfying well-planned video game destruction could be and that has stuck with me ever since.

Now that Red Faction: Guerrilla – ReMARStered (best or worst title ever, you decide) has been released I can relive that satisfaction all over again because, despite a few titles like Saint’s Row and Just Cause coming close, no game since has replicated that feeling of explosive satisfaction for me. So I find myself, 12 hours deep into the re-released version of a game I have already finished at least three times, once again enjoying myself immensely. Taking out key supports with my hammer and watching the building tumble, disintegrating the wings of attack ships with my nano rifle, throwing remote charges at baddies and watching them scatter in the ensuing explosion. It is all so visceral, so engaging. In my mind, Guerrilla had some of the best moment-to-moment gameplay from the previous generation and that holds up to this day.

As for the new version, well there isn’t much that is new. The game looks a bit sharper and supports 4K resolutions, but apart from that, there isn’t too much that has changed. But that is fine considering it isn’t a full-priced release. It is even free for PC players that already have the original release on Steam, which is nice. There are a few legacy issues that I would have liked to see fixed, things like manually having to switch between a controller or Keyboard/mouse on PC or some clunky menus, but these aren’t deal breakers, just niggles that remind you this is quite the old game now.

Guerrilla was never the perfect game, It had issues with a boring story, some bland areas and a couple of underwhelming weapons and those issues still ring true today. But just like when it was first released, none of these things dampen the pure joy the game has to offer. The box says that every man-made building in the game can be destroyed and that is one hundred percent true, a concept that has yet to be repeated in gaming. It is a design idea that has been implemented in such a fashion that it is timeless. No matter how dated the game looks or how janky the story is, the fun to be had levelling an entire town with a combo of well-placed explosives, gas barrels and a giant hammer is second to none.

Red Faction: Guerrilla is a game that knows its place in life and owns it. A game so confident in its gimmick that nothing else in the game world matters. It was refreshing when it was released and it is still refreshing now. No heavy stories, no deep combat systems, just a man, his hammer and a giant playground waiting to be torn apart. Bliss.