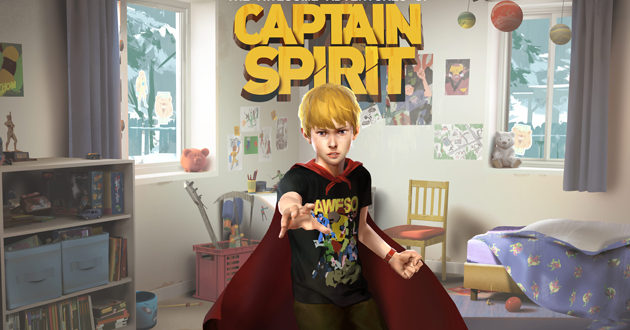 Acting as a prequel episode to the upcoming Life is Strange 2, I admit I went into The Awesome Adventures of Captain Spirit with some trepidation. Both Life is Strange and its prequel series Before the Storm were emotional, cathartic experiences for me and I was uncertain the connection I’d built with Max, Chloe and even Rachel to a lesser degree could be replicated.

Despite these misgivings, I was floored from the opening moments of Captain Spirit, beginning as it does with the frantic, fingerpicked notes of Sufjan Stevens’ Death with Dignity, the lead track from his 2015 LP Carrie and Lowell. The album itself is a travelogue of grief, loss, regret, love and forgiveness built around the death of Steven’s mother and the tumultuous relationship they shared. While Death with Dignity sets the scene for the album, here it serves as a powerful shorthand detailing the events prior to the story of Captain Spirit. DONTNOD have always done a great job of selecting licensed tracks but this goes above and beyond, Stevens’ lilting voice and affecting lyrics pairing with the snow-draped landscape of a rundown rural existence to bring me – tears already welling – into the world of Chris, a 9-year old boy whose mother has passed, playing in his bedroom on a cold Saturday morning in Beaver Creek, Oregon.

As we explore his bedroom and interact with the many toys and drawings that decorate it, Chris is revealed to be a very imaginative boy who sees superheroes and supervillains at every turn – understandable given the landscape of cinema for the past decade and the effect this might have on pre-teen boys. In fact, Chris has invented his own superhero identity – the titular Captain Spirit. We’re interrupted however by intermittent and increasingly aggressive demands by Chris’ father to come and eat his breakfast. Throughout the course of breakfast, Chris eats while his father Charles finishes his third beer for the morning and the realities of Chris’ lonely and isolated existence are revealed. His father is an alcoholic with a temper who’s still reeling from the death of his wife years prior with Chris the unfortunate victim bearing the brunt of his pain and anguish. Suddenly, Chris’ retreat into an imaginary world of heroes and villains, where good and bad are simply that, makes sense as he struggles to reconcile the love and fear he feels for his father.

Because of this relationship, the interactions Chris has with his father are some of the most emotionally affecting pieces of a game I’ve ever played. In many dialogue options, Chris is given the choice to defy his father or soothe him. With the spectre of domestic violence looming large over my version of Chris I found myself walking on eggshells around this man, whose seemingly relaxed demeanour hints at the undercurrents of rage and violence underneath. When he asked me to grab his fourth beer of the morning out of the fridge, I did so hoping he would be happy – yet worried he’d get angry that it was the last one. After each of these interactions, Charles pays Chris a perfunctory amount of attention, just enough to keep him sated and clinging on for more while he continues to drink himself into a stupor watching a game of basketball and eventually passes out.

As a grown man and father myself, in ­­­­Charles I saw a degenerate piece of shit, slowly destroying the greatest gift his wife ever gave him as he drowns himself in whisky and self-pity. As Chris, I saw Dad; someone who needed help that was beyond my understanding – but maybe if I did what he said, and tried really hard to be good, he could go back to being happy again. So I put on a load of washing, cleaned the dishes, and conquered my fear of the dark in order to turn the hot water heater back on. If you have never understood domestic violence and why it can be so difficult for victims to leave, I implore you to play Captain Spirit if only to gain some small insight into the hard road that victims, especially children, face when they leave their abuser.

The majority of the events in Captain Spirit involve Chris exploring the house and surrounding area as he completes a ‘to-do’ list of sorts; collecting every piece of his Captain Spirit costume and defeating the henchman of his arch nemesis, Mantroid. In the same way becoming Captain Spirit is Chris’ coping mechanism to deal with his abusive father, it’s also his way of processing the death of his mother. In many sequences, Chris has the option to use his ‘Spirit Powers’, a ‘Force’-like telekinesis that is revealed to be a switcheroo at the last minute, such as a remote hidden in his other hand while he turns on a TV. The most heartbreaking implementations of Spirit Powers occur when Chris attempts to do a thing like evaporate the bottle of bourbon his father is drinking or crush the cans of beer scattered around the house in an effort to take some measure of control over his life. Chris recognises the effect alcohol has on his father, but even Captain Spirit can’t defeat this insidious enemy. The climax of Captain Spirit comes shortly after Chris wakes Charles up ­­­­from his drunken, passed-out state. It’s a gut-wrenching sequence that crescendos with a moment which drives home the power of hope and left me desperate for what follows.

The Awesome Adventures of Captain Spirit is a moving piece that explores grief, love, abuse and the resilience of children in just over two hours. Given that it is provided completely free of charge, I would implore everyone to give it a chance, even if you didn’t enjoy Life is Strange. For gamer parents out there, it should be considered an essential experience.

The Awesome Adventures of Captain Spirit is available digitally on Xbox One, PS4 and Steam for PC.