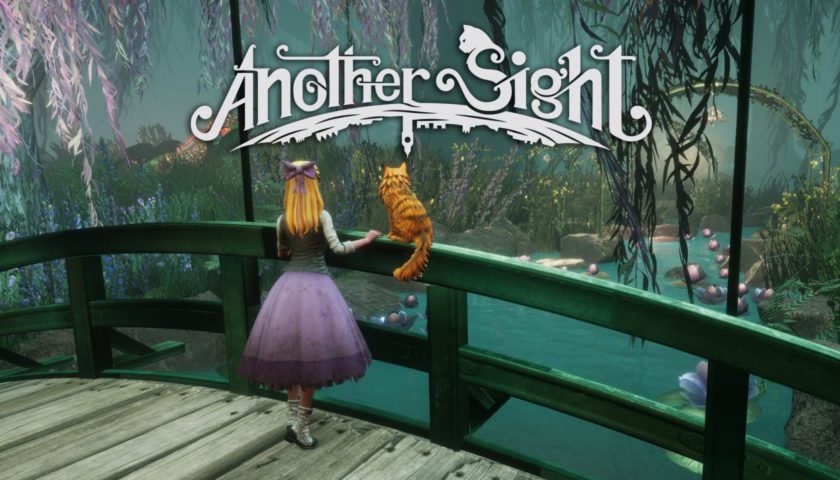 Colours burst across the sky in tones of tambourine,

They pulse and burst in wonderous shapes my eyes have never seen.

When her painted calls tint my path, I know I’m not alone,

And I hear the swirling colours spin as they lead me home.

Terrible poetry aside, I don’t think I have ever given much thought to how a blind character might perceive the world and I can’t recall a representation of this in a video game. The team at Lunar Great Wall Studios clearly have though, and this can be seen and heard in the visual and sound design of Another Sight.

The game is told through the eyes and ears of Kit, a young girl who starts her adventure by falling into the London underground and losing her sight in the process. She is joined by a mysterious Cat (who I later learned is called, Hodge) and he helps her navigate the world. While Hodge sees the world as we might expect to see it, Kit no longer has that sense available to her. It’s not that simple though as she still perceives the world in a surreal fashion, through her hearing and limited vision.

The primary mechanic in the gameplay involves switching between Kit and Hodge to navigate the world and solve puzzles to progress the adventure. Viewing the world through Hodge’s eyes provides a comfortable way to observe the environment and give context to what is going on. When viewed through Kit’s eyes, her surroundings are unsettling and otherworldly but have a special beauty.

Kit and Hodge traverse a number of increasingly strange environments as they move deeper into the underground. The visual design of Another Sight, which is inspired by Neil Gaiman’s urban fantasy, Neverwhere, is one of my favourite aspects of the game. The game areas are quite distinct, from the mechanical and desolate London underground to windswept temple ruins. At one point in the adventure Kit and Hodge walk through a huge garden, where the plants become massive as they progress. The whole gives off Alice in Wonderland vibes and really adds to the atmosphere of the game. Another favourite location of mine is an undersea tunnel, complete with amazing aquatic life passing in the background. I was constantly switching between Kit’s and Hodges’ views (more so than needed) just to experience the visuals from both characters’ perceptions.

Another standout feature of Another Sight is its wonderful music, provided by Orchestra Sinfonica di Salerno – Claudio Abbado (and, yes, I had to look that up). Most of the time the music is an understated companion in the background but swelling when needed to add excitement or underscore Kit’s emotions at other points in the game. It’s always difficult to describe music in an article, particularly for those not musically inclined, but just know that the soundtrack is one of my favourite aspects of the game.

The voice actors also do a really good job, particularly actress voicing Kit. Kit encounters several interesting artists and inventors from history including Claude Monet, Nikola Tesla, Claude Debussy and Jules Verne. I enjoyed the voice acting of all these characters, though some of the enemy guards Kit encounters sound a bit cartoonish, it’s all great work. Encountering these famous characters in Another Sight’s strange settings adds another layer of interest to the game and I enjoyed their appearances.

Another Sight is essentially a puzzle platformer where the player controls the two protagonists, making use of their different skills, to advance through the levels. The game plays out on a 2D plane as Kit and Hodge move left, right or move vertically between platforms, but the world still has depth thanks to the detail the game’s artists have put in the backgrounds. Kit moves a little more slowly than Hodge due to her vision impairment, but she can open doors and activate controls that Hodge cannot. Kit can also jump short distances if she can perceive her landing space, and this forms some of the simple puzzles. Hodge is more mobile and can jump further and scale highlighted pipes or walls. He’s also able to activate some controls which allows the to protagonists to work together to solve puzzles and progress through the levels. Some of the platforming and jumping can be a bit fiddly, particularly with Hodge. He has momentum with his jumps that I found often had him land on the edge of the platform and slide off the edge to his (temporary) death. This caused to redo some sections a bunch of times, though it really is a small complaint in the scheme of things.

Another Sight works themes of good and evil into its story as Kit and Hodge find themselves involved with an expedition that seeks to find the “Source”, which provides a mysterious power harnessed by some of the characters and environments in the game. Kit is initially driven to find her father, who goes missing when she falls into the underground at the start of the game. As things progress, Kit’s importance in the events surrounding the source becomes more evident and results in the player making a key decision at the end of the game.

On the whole, I enjoyed Another Sight, particularly its music and visuals. While some of the physics in the platforming gave me a bit of trouble, overall the gameplay is solid. The puzzles were not difficult and allowed things to move at a decent pace, although the game is quite short, and I completed it in 5 hours (which takes into account my lousy platform skills).  Another Sight is available now on PC, PlayStation 4, Xbox One and Nintendo Switch.