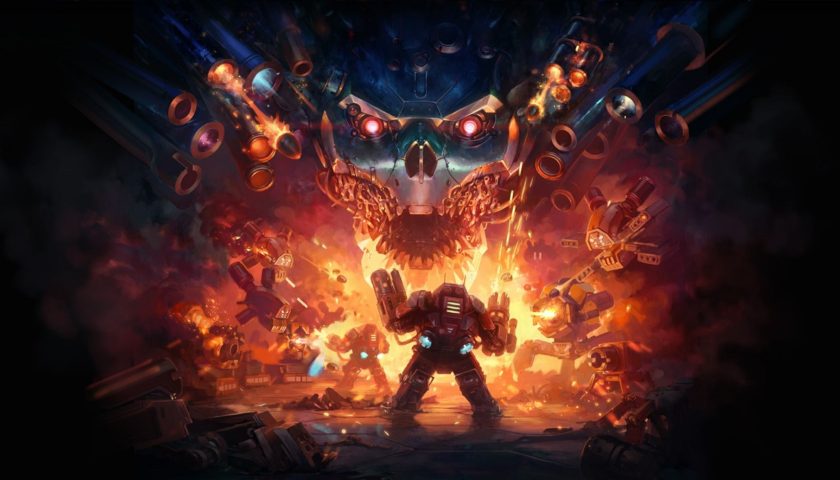 Mothergunship – Build Your Own Bullet-hell

On paper, Mothergunship is a game that would be a hard sell for any game designer. We could imagine the pitch now – “so yeah, it’s going to be a bullet-hell first-person shooter with rogue-like elements … with Lego guns”.  Whether it is genius, madness or a mixture of both, the result is an incredibly unique game that’s as enjoyable as it is addictive.

The game kicks you off with a fairly simple setting that whilst hardly original, is full of enough self-aware humour that it feels you’re being taken along with the whole ride. It’s your classic alien invasion and naturally, it’s up to you and your team to take out the Mothergunship (roll credits). In order to do though, you’ll need to deplete its shields, which are powered by (you guessed it) other mother ships. Thankfully the developers were aware of the clichés and the dialogue quite often pokes fun at itself or is delivered in a very clear, tongue in cheek tone. Regardless of this though, the motivation to plough through level after level, slowly edging your way to the final goal never really grew stale.

How the game works though, is way more complex than its narrative. Each level stage is broken up in a series of levels on a given ship. The level’s though, similar in every rogue-like game is randomly generated and you’re never sure about what’s on the other end of that door that opens up. Not only will you be battling a varied assortment of robotic enemies, but you’ll also be battling the environment and taking your chances with shops and item drops. Although there were cases where it felt like the RNG God’s were against us, it was a rarity for the most part.

Although the levels themselves are randomly generated at the time of reaching a new floor, the developers were clearly using templates, so the levels themselves don’t ever go into those ludicrous heights of bad design. The enemies you encounter will feel more and more familiar as you gain experience and as a result, you’ll adapt accordingly and read rooms faster the more you play. This is especially important because as the difficulty grows, the more the game earns its bullet-hell title. Some rooms will literally have you jumping all over the place from the moment you enter as you try to run and gun without eating too much damage as well as avoiding the environmental dangers like lava. Every so often, the game throws a boss fight at you and each time the scale and design make them feel like the epic battles that they are!

How your weapons work, are a combination of your imagination and what items available at the time, and here’s where the Lego reference comes from. Each arm can carry a combination of connectors, barrels and modifiers. As you collect coin drops and visit shops on a given floor, you’ll be able to expand on these and create any convoluted contraptions of mass destruction that your hearts desire. There is a downside though, a clever counter to simply loading out an entire armada on each other is that your energy (ammo) will deplete quicker depending on how many barrels and damage you’re loading up on. Naturally, going too light will keep your energy stored but will make things extremely tough when you’re trying to take out certain enemies. What makes it right for you will clearly be an answer of balance and preferred style as to how you go about your FPS’s. The drawback to losing is that whatever items you’ve collected in that level (and the ones you initially fitted out in the loading screen) are gone forever. Mothergunship won’t leave you high and dry though if you run out of items, each stage will allow you to do bonus levels which allow the player to boost up their inventory or cash if they’re running low.

Graphically there’s not a lot to write about here. Whilst it’s nothing special, the more important detail is that we never experienced slow down, even when the screen was incredibly busy with bad guys, bullets and explosions. We reviewed this on the PC and the only jitters we saw were right before a level opened up to us when it was clearly generating and loading everything into place.

Simply put, Mothergunship is a really fun game! It’s addictive, fast-paced and intrinsically addictive. Losing has weight to it, but rarely was a death delivered where it didn’t feel like the game was cheating you or being obtrusively unfair. Whilst relying on a lot of RNG, the developers should be highly commended for not letting that aspect drive the entire gameplay experience. Mothergunship is a game that’s easy to pick up and play and enjoy on your own or with your friends.