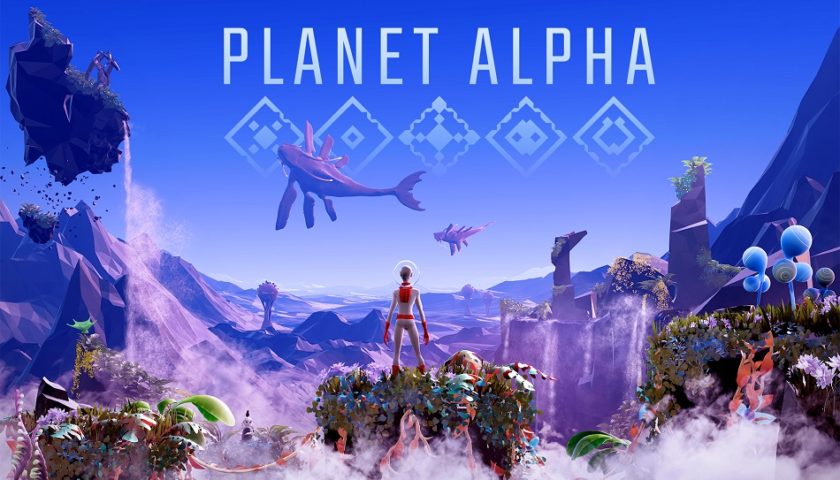 Without ceremony, fanfare, or inciting incident, Planet Alpha opens cold on an unknown world. An astronaut ambles across the dusty landscape, and without an explanation, their presence is understood.

They are a traveller. The space suit tells us this.

They are stranded. No feature in the environment seems suited to their existence.

They are desperate, yet despite their obvious injury, they are compelled to journey forth.

Planet Alpha has the hallmarks of an early 90s sci-fi platformer, where beauty belies the dangers and the player is carefully kept balanced between the competing emotions of wonder and fear, submitting them to a constant, endlessly-refreshed awe. It is not an exercise in nostalgia, but an embrace of the tone expressed by past masters such as Flashback and Another World.

As the wayward explorer in Planet Alpha, you must exercise a mix of problem-solving, speed and stealth for the varied areas throughout the game. The sections requiring these attributes are staggered at first, but as you progress through each of the ten chapters, a blend of all three make for many memorable challenges.

One of the few abilities you have in the game allows you to change the time of day on the planet. This is introduced first as a means to align the planets and activate dormant monoliths, but further into the game, the daily cycle changes the behaviour of the flora and fauna, opening new solutions to puzzles that seem a dead-end.

Sometimes the solution is to run. There is no direct combat in the game, and shrewd use of the environment is required to counter the forces that spell certain death for the player. While it can be a difficult game, it tracks progress incrementally, meaning you are never too far from an autosave, and every stable inch of ground won is yours for good. There is a peculiar dichotomy here with Planet Alpha being both unforgiving at times, yet extremely lenient.

The nature of the game means you can muddle through a puzzle, unsure if you have left some path unexplored or done things in the right way. At other times you might barrel through an area, die, yet the game picks up as though you had reached the save point legitimately. Some sequences do lean more on memorisation of patterns rather than reacting to events, but as there is no tally of deaths, frustrations are temporary. Chapters can be started over if you want every win to feel earned, and although it is mostly a linear affair, there are incentives for investigating the uncommon path, and doing so is a must for reaching a true ending.

Aside from a few tooltips that show through the course of play, the storytelling is told strictly through the environment and how you interact with it. One novelty surrounding Planet Alpha is that the achievements for the game are more forthcoming with exposition than the game itself, and while it did not necessarily need a tell for what was shown, it was still a peculiar aspect caused by the platform and its conventions.

It is also a sense of story that is shared by Planet Alpha rather than anything explicit. There is a vague understanding that some catastrophe had befallen the eponymous world, long before the astronaut had come. Calculating robots make war against the living, as much with the player as they do the creatures, and suggest that your presence is only a footnote against a larger, more sinister purpose. There are also remnants of a lost civilisation found across the landscape, suggesting that the current conflict is merely a new chapter in the history of the eponymous world.

The greatest note from the environment design is how alive everything seems. It is filled with many striking areas, and it seems that constantly moving, erupting in colour, or otherwise drawing attention. Whether a background element or something nearer the player, every small touch builds the environment. The emergence of bioluminescent fungi as the world passes into nightfall is a particularly joyous delight.

Further bringing to the world to life are the creatures and robots in the world. The creatures vary in intent and design, from erratic insects moving in stuttered steps, to lumbering giants closer to whales, dinosaurs and jellyfish.

The robots are pure 50s science fiction, like the iconic automaton from Forbidden Planet, spherical and covered in chrome. Even the scattered helices of electrical current passing between antennae evoke the big-switches and vacuum tubes of maniacal scientist’s laboratory, as much as their mechanical march across the planet. In increasing larger groups and sizes, they bring an aura of dread whenever their unnerving red gaze is cast the astronaut’s way.

Haunting at times, the low murmurs of an eerie synth breed a nervousness that lingers in the heart. Each of the sounds carries the weight of their intent, informing the player of their actions and surroundings, or that danger is near. Those carrying terror in their moment are the drone of red beams or the alert chittering of wasp-like insects, but it is the twice-pounded bass that accompanies a fall into oblivion that will echo inside you, long after you have left the game.

At its close, Planet Alpha returns to its beginning, delivering a context not apparent at the outset, and in its imperfect ending delivers you back to the journey you thought finished. It is only when the circle is broken, raising new questions about what transpired, that it truly ends. It is a hostile world, this Planet Alpha, as deadly as it beautiful. It’s almost a shame to leave it.