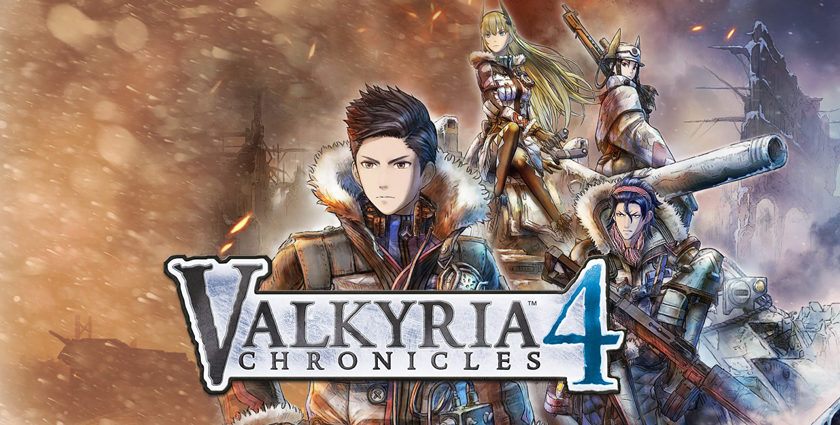 Valkyria Chronicles 4 follows the story of Squad E, led by Commander Claude Wallace as they push back against Imperial Forces across the continent of Europa. Whilst not a complete allegory for World War I or II, there is plenty of inspiration evident from these harrowing events as Valkyria Chronicles 4 focuses on the price ordinary people pay under such extreme circumstances. It’s an angle I have always found compelling, whether it be in other games like Valiant Hearts or films like Isao Takahata’s masterpiece Grave of the Fireflies. Time is split between the battlefield, cutscenes and managing the wide cast of Squad E, whether that be developing new equipment or training troops to improve their stats and unlock abilities.

Valkyria Chronicles 4 banks on the idea that players will invest in the cast of characters and provided you can put up with some wild swings in tone, it really is the best way to engage with the game. Both the Likes and Potential systems support this approach and translate to in-battle benefits for both good and bad. For example, the Potential system will see certain characters perform better when they are grouped with the same or opposite gender, or if they are near a leader. Similarly, the Like system means that grouping characters who like one another will result in more frequent team attacks and Potentials being unlocked. Effective squad management means paying careful attention to the way different members will interact and pushes players to have a deeper relationship with the teams they build. Of course, this also has the knock-on effect of making any Perma-death of a character all the more devastating and will no doubt see many players reaching for the reset button in a heartbeat.

Thanks to the sumptuous cel-shaded art style, Valkyria Chronicles 4 looks gorgeous and should continue to do so for many years to come. It also ensures that players who opt for the Switch version won’t notice a massive drop in visual quality. The score is suitably epic and sounded fantastic through both my 7.1 surround sound system and Sony wireless headphones I use during late night play sessions.

A major addition to Valkyria Chronicles 4 is the introduction of the Grenadier class, which allows players to fire shells at a much further range than the mortars other classes like Scouts and Shocktroopers have access to. A well-placed Grenadier also provides some fantastic defensive options as they bombard incoming enemy forces. In many ways, Valkyria Chronicles 4 feels more balanced than its predecessors and tougher battles require a well-rounded selection of classes on the field, no doubt in a bid to curb ‘Scout rushing’, a tactic popular in earlier Valkyria games that is further hampered by enemy Grenadiers.

One point of contention I do have with not just Valkyria Chronicles 4 but the series as a whole is its penchant for pulling the rug out from under the player partway through a battle by introducing events or a ‘twist’, shifting the objective which in some instances is difficult to plan for. This is not always the case and is fairly infrequent, but can mean a loss of 30 minutes to an hour depending on the classes of deployed squad members. That said, there were occasions where it appeared the game felt sorry for me and had the AI fumble to prevent a last-minute loss on my part after a particularly lengthy battle. On a similar note, new players may find the targeting system frustrating as it operates on a dice-roll rather than purely from the accuracy of player aiming. This is a series staple and while it can be maddening to have a perfectly lined up shot miss, the AI is also at the mercy of this system which saved my near-death squad members on plenty of occasions.

While previous Valkyria fans will get slightly more out of Valkyria Chronicles 4, it is, without doubt, a fantastic game for newcomers to jump on-board with. Improvements to many of the systems ensure a more balanced experience than previous titles and the availability of a Switch version will no doubt sway many potential buyers looking for a portable option.