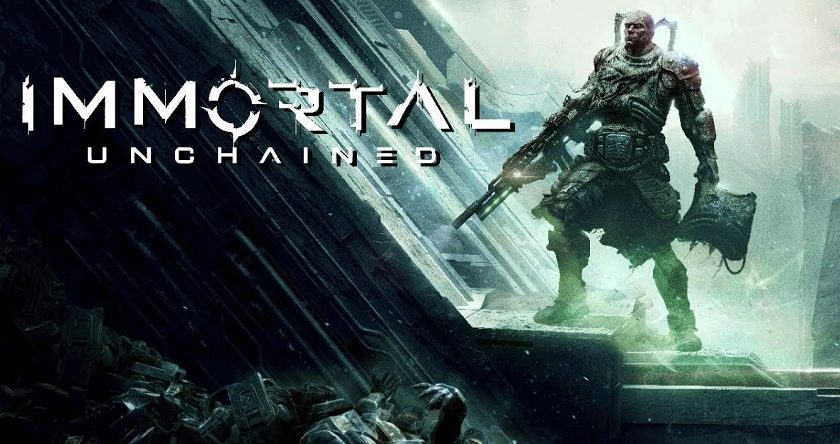 It took a long time for me to get into this game, and I mean that literally.  Prior to playing Immortal: Unchained I had never truly been beaten by a game before.  I have never played the Dark Souls series, experiencing the unforgiving difficulty level that pushes players to their absolute limits.  Never had that moment where you practically jump to your feet yelling with relief at having beaten a particular boss.  It took me many attempts, and many rage quits, just to get past the first boss.  Some of this comes down to my inexperience with the ultra-hard genre that Immortal: Unchained sits in, but a good chunk of it has to do with the game itself and its inherent mechanics.

The story is pretty bare bones here.  You have been awoken/released/revived from a prison as the last hope to stop a spread of the undead through the nine worlds.  Not much else is given to you as you start your journey and what has been given is likely to be forgotten as you die over and over again while trying to make your way through the game.  There are a handful of NPC’s you will encounter in the game, but there is no reasoning given for their existence, for example, the first world you are sent to after getting out of prison is described as an icy primordial world devoid of life, but somehow you meet a woman just sitting out in the open three minutes after you arrive.  Ok then so not quite devoid of life.

The problems Immortal: Unchained suffers from most are all issues related to gameplay and mechanics.  The biggest of these has to do with the game controls.  I was reviewing a copy on the Xbox One and right from the beginning, I could tell there were serious issues with the manual aiming.  Trying to aim while zoomed in just felt slow and jumpy, making any attempt to seriously aim wildly inaccurate.  With no method to increase the sensitivity of aiming present, the only option left was to just use the auto lock-on so that I could still hit a target while dodging the incredibly accurate incoming fire from enemies.  This may not be an issue in the PC version but on the Xbox One, it is a major problem.

The combat is also one of the areas where Immortal: Unchained does not live up to its own aspirations.  Despite there being a number of different classes to choose from, the only way I was able to be effective was utilising a shotgun to just blast every enemy head-on.  All the enemies have a weak spot, a big orange spot on their back, however, in most circumstances, you are facing off against more than one enemy at a time.  Trying to circle around and get that weak spot while under the aforementioned incredibly accurate fire from other enemies was near impossible.  Hence, a shotgun blast to the face for the win.  This was the third character I had created and was the first one that I was able to actually make progress with.

Additionally, since the game is all about being a shooter based action-RPG, I was really disappointed when I discovered that after about 20 metres my shots had no effect on enemies whatsoever.  I could see the bullets hit but they would just bounce off with no reaction from the one I shot at whatsoever.  I could throw a rock that far and if it was to hit someone you would bet they would notice.  Putting these kinds of limits which force you to close the distance just feels like a lazy design choice that is such a contrast to the premise of using ranged weapons as the primary focus of combat.

Because of the limits the game placed on me, I found the best strategy was to essentially just treat each new section as a scouting mission.  Find what is there so I am not surprised the next time and getting further and further incrementally not because of any great skill in the combat, which was just monotonous blasting by that point, but because that was the only way.  While there is no map in the game most of the areas are rather linear to progress through, although it is very easy to miss some of the obelisk save points if you take the wrong direction and wind up in the next mob of enemies.

Graphically, Immortal: Unchained has your typical spread.  Ice, jungle and industrial planets are there for you to explore, and while they do not look bad, they are just bland and not really memorable either and you will spend most of your time watching for the next batch of enemies to appear out of the ground rather than taking in the view.  There is a noticeable texture pop-in visible up to about twenty seconds after entering a new world or re-spawning at an obelisk, and it is a weird feeling to walk through the jungle and have it look as though the vegetation is growing out of the ground as you walk towards it.  It seems like a really weird way to do it but maybe it was a sacrifice the development team had to make.  I also feel I have to make a mention of the lip syncing for the few characters that you will interact with throughout the course of the game.  While Immortal: Unchained is fully voice acted, the lip sync is nothing more than the characters jaws going up and down comically.  It is kinda hard to take note of what they are saying when you are too busy giggling over their mouth opening and closing like a set of wind up chattering teeth.

At the end of the day Immortal: Unchained tries to replicate what it is that made Dark Souls the hit that it became, however through the problems with controls, unnecessary combat limitations and basic repetition it did not grab hold of me and make me want to keep playing and keep pushing.  I kept going because I had to, not because I wanted to and in a game like this it is the desire to beat the game that will keep the players engaged.  The game is playable and can be beaten, but sometimes it comes down to a good dose of luck rather than skill on the players part.