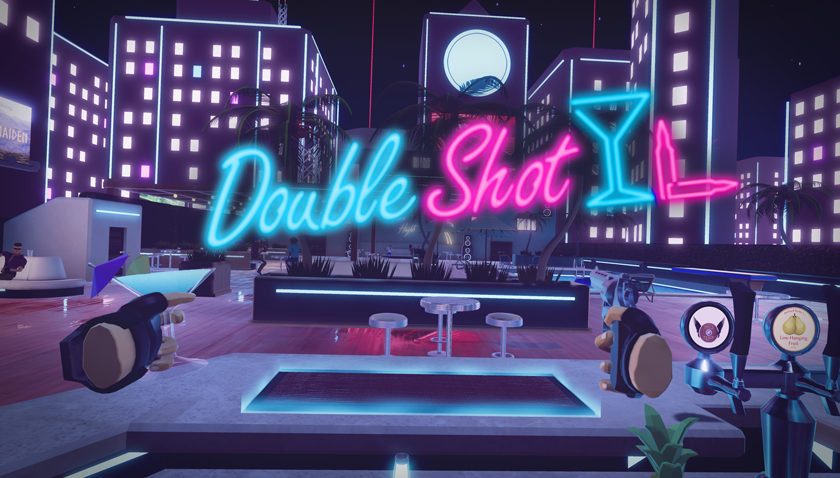 Making alcoholic drinks with a flair for style whilst simultaneously shooting bad guys and dodging bullets? Sign us up! Double Shot is a VR game with a unique set of ideas that we’ve never seen before! Player2’s Adam Rorke had a chat with Chris Burden from Aberrant Realities to talk about this intriguing title.

Adam Rorke: So Double Shot is a game about making cocktails with flair and style whilst simultaneously avoiding fun fire and shooting bad guys, all in an 80’s theme … how does one even come up with this idea in the first place? What was your inspiration?

Chris Burden: Double Shot is pretty much an amalgamation of a bunch of different factors. We were working on concepts for our final year project at the Academy of Interactive Entertainment. We were also lucky enough to get our hands on an HTC Vive and this was back in 2016 when they were this brand new super exciting piece of hardware. We had this idea for a driving game set in the 80’s because synthwave, that whole retro 80’s vibe, was really coming in strong at the time.

I think a few of us had a passing interest in a lot of 80s action movies as well. There was also a movie that I won’t mention that contained a pretty rough and tumble bar full of pretty tough people that one of our members, Harley, thought would be a really cool setting for a game. I think we were also heavily inspired by a lot of the earlier titles for VR that came out around that time.

AR: What was your reaction to be included in the PAX AUS 2018 Indie showcase this year?

CB: I’d been doing all of our applications for grants and opportunities as well as testing the water with publishers and I’d been met with a fair amount of rejection. We’d always received a pretty positive response from anyone who tested the game, but you don’t always believe what people say about something you’ve made. Anyway, James, one of the programmers walked over to me and basically said: “Look, let’s just apply for the Indie Showcase, it’s $50USD to enter and we won’t know unless we try”.

At this point I was like “Sure, let’s do it”. I wrote the hell out of that application, and I think our game has super interesting hooks. Anyway, I awoke bleary-eyed to a phone call, not that early one morning saying that we’d been selected. It took me a minute to realise what had actually happened before I sent the company chat about a dozen messages screaming that we’d been selected. It still doesn’t feel real, I’m expecting to find out that we’re getting Punk’d or something. Except we’re not famous, and I don’t think that show has been on TV for some time.

AR:  Developing for VR is still a path not walked by many game developers out there. What have you found most challenging with for this new hardware?

CB: You have a pretty low user base compared to traditional games. It’s such a high price point, and while it’s super fun and it’s this whole new way to play games, it kinda works against itself because releases are so limited, or they’re short three hour experiences that aren’t really that replayable. VR is actually pretty physically exhausting, so you kind of have to design your game around that, games that work in short bursts are kinda ideal, but sometimes you can get really into it.

I think the commercial aspects of development i.e. ‘How much money are we really going to make on this game?’ is honestly the harder part of the whole thing. Plus when you’re an indie dev and you have zero experience it’s really hard to know what to do to get your game ‘out there’. Luckily we’ve met some really cool people, a company called Ultimerse and their producer Meredith took us under their wing and they’ve been really great to learn some practices from. The Aussie game dev community is super welcoming and it feels so nice to be a part of something like that.

AR: Is there anything new we can maybe expect in the demo you’ll be showing at PAX AUS this year that we haven’t seen yet?

CB: A talking wristwatch! He’s a good, good boy. The PAX Demo will basically be the first sip in the delicious cocktail of our game. I’m not sure what flavour it is. Probably Appletini, that’s my favourite cocktail. We want to show players what’s in store for them, even if it’s just the first level.

AR: What part of Double Shot is your favourite and why?

CB: The fact that the team let me put a talking wristwatch into the lore of the game. Originally it was going to be the ghost of a long-dead southern gentleman but I wasn’t allowed.

AR: Is there anything you can tell us that’s in the pipeline that we can expect in the final product?

CB: I don’t want to over-promise, but voice packs for the watch, multiple levels, a cool apartment to hang out in, and a Smart Pistol … might be subject to change.

AR: And finally, what are you hoping people playing your game on the ground floor will take from their experience?

CB: I just want people to have fun. I get really happy when I see someone smile and laugh and carry on when they’re playing our game. If even one person walks away from it with a smile on their face I’ll be happy. Also the huge truckload of cash that you get for being an Indie Dev, that’s a thing, right?