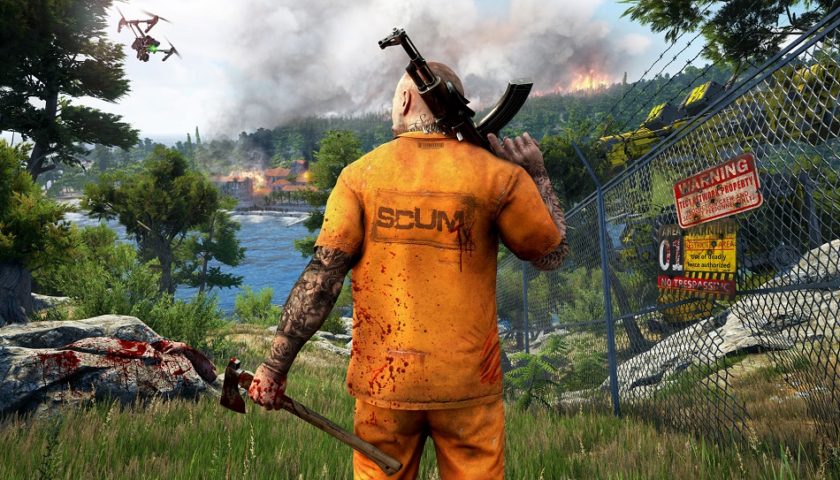 Having recently escaped from prison, and finding myself in the expansive hinterlands with nothing but the jumpsuit on my back and my own two hands, I was at a loss as to how to move forward with my adventure. Getting out of prison was a blur, but I knew that was just the beginning of my story, With no real direction, I did what any escaped inmate would do at a time like this… I ran. I ran and I ran with one thought in my head: survive.

Of course, because some higher power deemed it hilarious to create me with such little stamina, I could not run for long. So my epic journey of survival slowed down to a slow walk as I took in my surroundings. As I shambled along I saw a shack in a clearing and decided to make my way there, thinking I might find someone who could point me in the right direction. And if I found nothing but bad guys, well I’d just punch them dead. Within the shack, however, I found neither friend nor foe; it was empty save for a small hand axe that I tucked in my belt. And onwards I went.

I kept going until I found a cluster of buildings. At first, I thought I had stumbled across the very prison I was meant to have escaped, but as I got closer I realised it looked more like a small town. I could see lumbering figures near the buildings, so I hunkered down behind one to watch, unsure if these men were there to help or hinder.

Observing the way their bodies swayed, I first thought they were gardeners watering plants on the town grounds. It wasn’t until further observation, and a keen listening to the gurgling sounds coming out of their mouths that I realised these weren’t gardeners- they were barely men. These creatures that lumbered through the town were zombies; my most hated supernatural creature in the history of time, life, and everything in it.

The zombies looked slow; I figured I could take them without too much trouble, so I held my small hand axe tightly and made my way towards them. Slowly they turned around to face me, and once their lifeless eyes locked onto my orange jumpsuit, they ran with every inch of energy within them.

The next few moments are a blur. I remember a loud, ear-shattering noise (which was me screaming in pure, unadulterated fear) accompanied by the quickening beat of my heart as my adrenaline coursed through my system and I hacked those jerks to death with my itty bitty axe. It was only when I felt the sweet approach of death that I remembered I could block, and after what felt like hours (but was closer to a minute) I had them murdered and dead.

Quickly I stole their items of clothing that had the least blood smeared across them, finally getting rid of my glaringly obvious jumpsuit, and then driven by nothing but rage, I hacked their bodies into pieces. I didn’t know what I was going to do with a disembodied arm or leg, but at least I knew for sure they weren’t going to be coming after me again.

Deciding this was far too dangerous of a situation to continue alone, I roped a friend of mine into joining me. Unfortunately, he was a great distance from where I was so we had no choice but to begin the great journey of 2018.

Along the way, my stomach began to rumble in hunger. Luckily, I found a mushroom on the ground and shovelled that into my mouth, but it wasn’t long before the familiar pangs of hunger settled in again. Realising that a simple mushroom (that may or may not have been poisonous) just wasn’t going to cut it, I kept my eye out for another town or building where I might procure some food; ever watchful of zombies in the distance.

It wasn’t long before I staggered into a cornfield, and began to chow down like an animal. I ate every ear of corn in that field…and then promptly threw it all back up again. Upon checking my stats, I discovered I had unwittingly ingested 200% of my fibre intake in about five minutes, and realised I’d have to be pickier when choosing food in the future so I didn’t accidentally off myself on a vegetable overdose.

After what seemed like hours on my sore, corn bloated (and yet still somehow hungry) stomach, I came across a running river where I partook my fill of water… before pissing it all back out into the self-same river, contaminating my one water source. If I was Bear Grylls this wouldn’t have been an issue, but I’m about as far removed from that as humanly possible. Luckily for me, I was able to meet up with my friend not long after. From him I grabbed a backpack and a jacket with a few more pockets, vastly increasing my inventory space and making my life easier. He lacked water (hoping to fill his bottle in the river I had just pissed in), and he’d eaten all his food prior to meeting up with me, but it was nice to have company all the same.

Our journey from there was pretty uneventful. We ransacked towns and got a great deal of food and supplies. I had yet to find a weapon, but in my inventory was a pretty hefty melon that I could hurl at someone to do some damage, so I was feeling pretty good.

Deciding that we were kitted out enough to tackle almost anything, my friend and I slowly made our way to a military base in the distance.

“Lay low,” said my friend. “There might be mechs around”

Not knowing what a mech was, and deciding I was better off standing up than lying down, I remained on my feet and promptly felt bullets whiz past me.

Hunkering low to the ground, I watched as this giant mechanical creature patrolled the perimeter of the military base. Between us, the only weapons my friend and I had were a baseball bat, a gun (with no bullets) and my trusty melon. We knew we didn’t stand a chance of taking this on, but we weren’t entirely sure what we should do instead.

As the droning sound of the mech began to fade away, I got back to my feet, ready to set off on the next leg of my adventure. But before I knew what was happening, the mech spun around at the speed of light and shot me full of bullet holes. As blood poured out of my wounds I searched my inventory in a panic for bandages…but I was too late. My world went dark, my body grew numb, and I slumped to the floor, grounded in the permanency of death.

The best genre I can stick SCUM in is part survival, part horror, part simulation. Its metabolism management is unlike anything I have seen in a video game before, and it is this that makes it stand out from other survival games on the market. Anybody can survive against some zombies (except me, probably) but it takes some real skill to keep yourself fed, sheltered, dressed and healthy.

My one complaint is that once I kitted myself out enough, I found a big chasm of content. I was adequately equipped to handle the zombies that came across my path, but not anywhere near at the level I needed to tackle the mechs. But I had to defeat the mechs in order to get the better gear that I needed to kill the mechs… so…

That being said, this game is in early access. Though there are big blank spots in its development at the moment, I am sure these will not stay that way. With its in-depth character creation, advanced metabolism system and interesting inventory management, the game has a tonne of potential. I am incredibly keen to see what the end product looks like, provided I can grow some balls to face the zombies by then. Which I’m sure I will… probably… maybe.