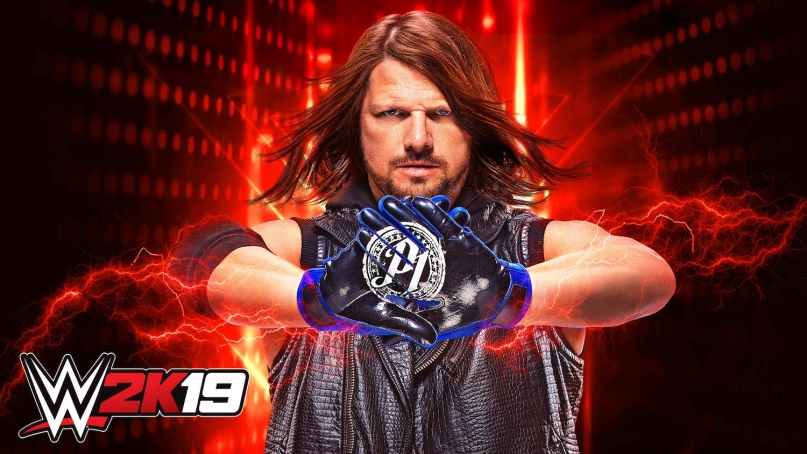 I like Wrestling. Not in an obsessive watch-every-episode-of-RAW type of way, but I do know my Goldust from my Finn Balor. I enjoy the theatrics of the big pay-per-view events and I have some great memories of bunkering down with my boys to watch Wrestlemania. So every year I look to the WWE 2K franchise and hope that this year will be the year that the WWE is represented with an enjoyable video game. A game that captures the feeling, the flair and the fireworks of what is perhaps the biggest staged athletic event on the planet. Sadly, as is seemingly always the case, the 2019 edition is not that game.

I do want to say that there are some good ideas here, some nuggets of hope for the franchise. This year’s story mode is the best I have ever played in the series. Playing as Buzz, an indie wrestler trying to make it into the WWE and incurring the wrath of Triple H in the process is a pretty neat story and it has some great moments and genuine humour. Taking my created character through a properly thought out tale is something I have wanted from the franchise for the longest time and this year I finally got to do that. The new upgrade trees for the create a player are also a wonderful addition. These make the game feel more like an RPG, with performances awarding actual skill increases instead of just buying upgraded stats with in-game currency. It is a smart move and one that allowed me to feel much more ownership over my created character.

The other great addition is actually a return. The showcase mode is back, this time focusing on the rise and fall and rise again of Daniel Bryan. Featuring real-life footage and recreations of his historical matches, this mode is a wonderful way for players to re-live what is one of the more endearing tales to emerge from professional wrestling in the last 20 years. Even though Daniel isn’t perhaps the most famous of wrestlers out there, he is immediately likeable and has had to overcome some serious hurdles to chase his dream in the WWE. This makes for an entertaining mode that fans will get a kick out of.

Sadly though these new and returning additions can’t hide the problems of the title, and there are many. What is even more problematic is that the problems are the same ones this franchise has been having for years. The biggest of these is the presentation. So much of the excitement generated by the WWE is thanks to the spectacle, the smoke and mirrors that give the illusion of grand battles between worthy warriors. We all know it is a farce, but thanks to the production and drama we are willing to suspend our disbelief and go along for the ride. In WWE 2K19 however, the illusion is constantly breaking. From the terrible lip-syncing in cutscenes to the constant graphical and gameplay glitches in the ring. It is almost an impossible task to give into the drama when my main character is tripping over the rope even though he is in the middle of the ring or has his leg stuck in a barrier. After all these years this is still a massive issue and frankly, I can’t see any improvement over previous versions. Throw this in with grating, repetitive commentary and it is hard to find any positives at all.

Not only is the game glitchy but it looks terrible too. Bland, featureless wrestlers that lack detail and arenas that lack any personality are the order of the day, making the game seem like it came out in the previous generation. What shocked me the most, however, was the difference between the standard and the 4K versions. I thought the game looked bad until I saw it running on my boy’s Xbox One S, which took the already disappointing level of detail offered on my One X and lowered it appaling levels. It seriously looked like when I am trying to get a game running on my laptop and I have to turn down every single detail setting just to get it to run. I expect there to be a difference between the two versions but when that difference is between “crap” and “crappier” it is hard not to feel cheated.

I could possibly forgive all of this if the gameplay was up to scratch, but once again I am finding it hard to see any improvement on previous versions. It is essentially the same game we have been playing since this generation started. There is a new special feature which allows for the building of momentum to instantly recover or increase damage, but apart from that, there is little here which hasn’t been seen in the past. To say the wrestling system is showing its age is an understatement and testament to the fact that 12 months just isn’t enough development time to inject any real change into a game such as this, especially with what is clearly limited resources. Well, at least I hope it is limited resources because I would hate to think there was nothing but incompetence to blame.

What is truly astounding about all of this is the fact it is a 2K game. I mean NBA 2K is known for its beautiful presentation. Everything about the NBA 2K franchise screams polish and care, the exact opposite of what I get from WWE 2K. How can the same company be happy with the disparity between these two products? It is one of the great mysteries as far as I am concerned. I think that the only way this franchise gets better is if it takes a year off and a brand new developer steps in. But that will never happen, not with it selling well every year and the behemoth that is the WWE breathing down 2K’s neck to pump out a title on a yearly basis.

I guess I am just weary, weary of the WWE’s flagship title looking and playing like something cooked up in a basement by fans, not a production put together by a seriously large and profitable game development company. The only thing I can put it down to is apathy from 2K’s leadership. As long as the dollars roll in, who cares if WWE loving gamers get a sub-par product. Please, wrestling fans everywhere, I implore you. Don’t buy this game. The only way 2K and the WWE will listen is if their poor excuse for a video game doesn’t sell. That way we might finally get the Stone Cold Steve Austin level game we deserve, not the Baron Corbin level game we have been getting.