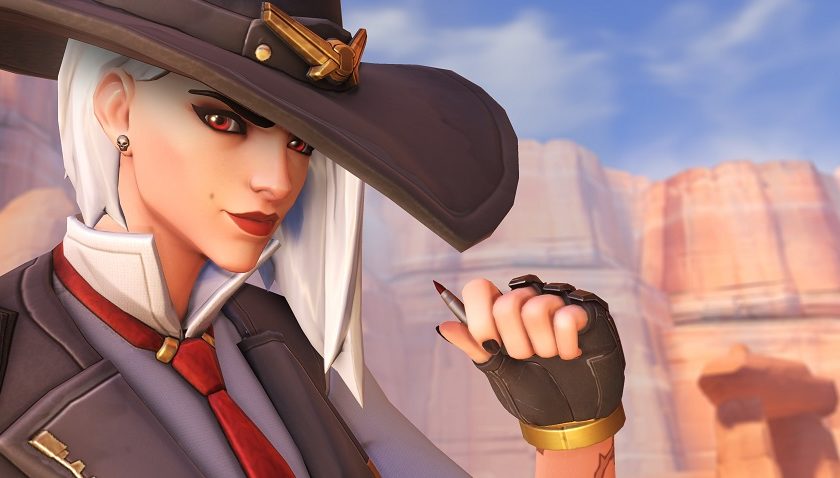 FANS of Blizzard’s hero-based shooter Overwatch know that the company’s annual BlizzCon event in Los Angeles traditionally brings a new hero and a new short film, and this year’s event was no exception.

The audience was treated to a new short, entitled Reunion, focussing on cowboy McCree and his thwarting of the train robbery on the Route 66 map. It turns out that some of his former associates, now comprising the “Deadlock Gang” were responsible, with a woman named Ashe being the ringleader – accompanied by three twins in coal-scuttle helmets, an Omnic sniper, and a large robot named Bob.

Reaction to the short was positive – Blizzard short films are usually good, after all – but the bigger surprise was that out of all the interesting characters in the short film, the Overwatch developers had decided to add Ashe to the game.

Ashe’s primary arm is a lever-action rifle, reminiscent of something like a futuristic Winchester Model 1894, with her secondary being a sawn-off shotgun with such ferocious recoil that it enables her to rocket-jump, her special is a stick of dynamite, and her ultimate is Bob the bowler-hat wearing robot, who unleashes a barrage from his wrist-mounted cannons at nearby enemies.

Despite being a very cool character, the developers acknowledged Ashe was originally intended to simply be another character in the Reunion film.

“As we watched more versions of the movie, we found that she really stood out,” Overwatch game lead writer Michael Chu said.

“The design was really compelling, and as development went on further, the Overwatch design team got excited. Like, ‘Oh, her gun is really cool’ – and they had been looking to make a character that focused more on the weapon. And so from there, that’s really what she came out of,” he said.

Game producer Nicole Gillett said the game’s creative process allowed for things like Ashe making the transfer from movie to game and that was a great thing.

“I think it’s amazing, because we don’t feel limited by maybe going on a schedule, or maybe our plans, what we’re supposed to do. If we something cool that we just can’t help ourselves with, we go ahead and indulge. We make a cool character if we really want to,” she said.

Ms Gillet said one thing that was certain from the start was the Ashe needed to have Bob as well.

“I think when we saw Ash, and Bob, in the cinematic, like, we cannot have Ashe without Bob,” she said.

“And I think for a moment we did think, ‘Okay, what if she didn’t have Bob?’ And that was just maybe two seconds of, ‘Oh, well, that’s just silly’ – because we have to have both.

“So there was never a situation where we really thought Ash would be great without Bob.”

Getting a semi-autonomous robot into the game was a huge technical challenge, however, Ms Gillet said, explaining Bob was effectively a seventh player on the team.

“He can be manipulated like any other player. He doesn’t act like a regular pet. You can sleep him, you can nano-boost him, you can heal him up,” she said.

“Not only that, but we optimised the game for six vs six, so then when you have a whole other character model in the game, it presents a huge challenge for engineering group and our technical group.

But the team felt so strongly about this character – and so passionately about including Bob, of course – that we really put our minds to it, and made it work.”

The proof is in the campfire stew if I might paraphrase a cliché, and while attending BlizzCon this year I was able to play-test Ashe (and Bob)

In a nutshell, Ashe appeared to be a ranged McCree – which suits my playstyle very nicely indeed, offering a 12-round repeating rifle for precision shooting, a sawn-off shotgun for close-range work, and dynamite to go boom for an area of effect attack.

The scope on her rifle gives her a longer range than McCree, but since it has a modest zoom she is still out-ranged by Widowmaker and Ana. It functions as a semi-automatic arm (one shot per mouse click) and does respectable damage, particularly with headshots. Indeed, I found a reverse form of the Mozambique drill (in this case, one shot to the head, followed by two into the centre mass) to be quite effective.

Ashe’s sawn-off shotgun does damage at close range but is really more useful as a rocket-jumping tool, allowing the player to quickly get out of dangerous situations (and damage enemies in the process), while the dynamite has a bit of a delay on it (allowing other players to get out of the way), but is devastating when it detonates.

The real standout is her ultimate ability though – Bob the robot. When activated, Ashe repeats the “Bob, do something!” line from the movie and her Omnic offsider appears, engaging enemies with his wrist-mounted cannons for a time and generally causing chaos until either he is killed or his ammunition depletes. Either way, it’s a lot of fun to use and extremely effective when deployed properly.

I am by no means a professional (or even highly-ranked) Overwatch player, so naturally, I’ll have a different playstyle to the people who are more… involved in the game, but Ms Gillet said the developers were always interested to see how the professional played the new heroes – including Ashe.

“I always see what we can do internally, and then I see what’s in my rank, which … I’m not very high up there, but then sometimes I see a pro player playing this character, and it’s totally different than something I ever thought that they could do,” she said.

Ashe is in the Public Test Region now and is expected to join the main Overwatch roster soon.

Royce Wilson attended BlizzCon as a guest of Blizzard