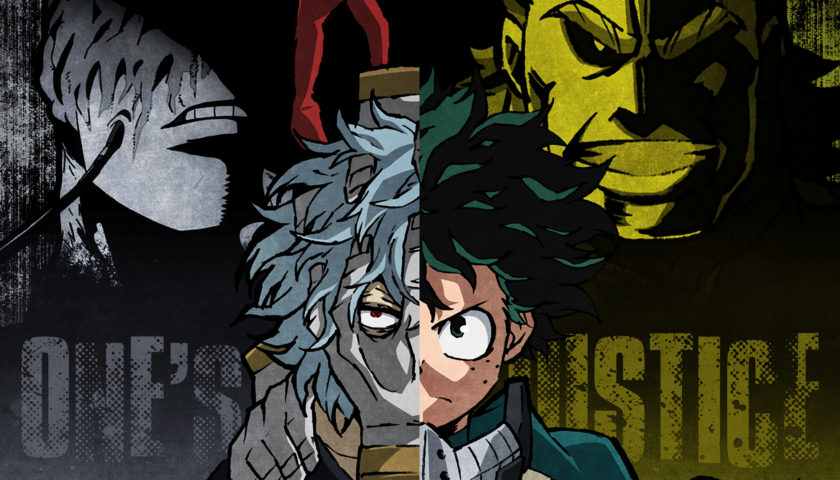 My Hero One’s Justice is a bit of a weird name if you are coming to the game without a knowledge of the anime series My Hero Academia, on which it is based.  For those who are fans of the series and have watched season three they will understand the reference, but for everyone else who may be wondering, it refers to a major villain known as One For All.  Got it now? In the end, it doesn’t matter if you do, because by the end of the story mode you will have a  much better understanding of all the story’s ins and outs.

Much like its spiritual cousin, Dragon Ball FighterZ, My Hero One’s Justice (MHOJ) is a game that first and foremost has been made for people that are already fans of the series.  While anyone can pick up the game, play it and enjoy it, it won’t give you the origins of the main characters, such as the link between Izuku and All Might.  As this is a game that has been made for fans of the series it is assumed that going into it you will already have that knowledge for yourself.  I was fortunate enough to have finished watching the first two seasons about three weeks prior to receiving a copy of the game for this review, so I was going in already understanding the who the characters were, their motivations and their powers (known as Quirks in the world of MHOJ). The story mode of the game mirrors the events that occur from halfway through the anime’s second season and finishes about halfway through the third, utilising animated comic book style cut scenes with full voice-over to progress the story along between opponents.

One of the major differences that set MHOJ apart from DBF, and not in a positive way, is the absence of the cast from the English dub of the series.  Yes there are some purists that will love having the original Japanese voice cast in the game, but for someone like myself who has only watched the dubbed version of the show it really affected the enjoyment that I could derive from the game, having become so used to hearing the voices used in the English speaking dub that they are my base for comparison.  The game has full English subtitles that spell out every bit of the story so you do not miss out on any of the details, but when you are in the middle of a fight it can be very hard to concentrate on fighting your opponent while reading the subtitled translation at the bottom of the screen.  There are not a lot of moments like this, but it does highlight what works with a subtitled TV show, where there are no consequences to moving your eyes to the bottom of the screen, does not necessarily work with a fighting game that is demanding your constant.  Having an English dub in the game would mean that I wouldn’t have to worry about what is being displayed on the bottom of my screen and could focus on the action at hand.

It could be because My Hero Academia is not the behemoth in the west that the Dragon Ball series has become, but as someone who has only seen the English dub, it did affect my enjoyment of the game.  Another thing that I found annoying is that for some reason there are no subtitles present in the intro and victory clips presented before and after a fight, so I have no idea what they are saying, again pulling me out of the immersion of the characters and the world they inhabit in MHOJ.

In a fighting game though it all comes down to the combat, and MHOJ utilises a very simple control scheme that consists of a basic attack and two buttons for Quirk attacks.  This system makes it very easy for anyone to pick it up and start playing, especially a button masher like myself.  Button mashing will get you through almost all of the fights although there is a handful where you have to be careful, lest you be pummelled by your opponent.  The biggest issues I had with combat came from the energy bar system that would allow you to pull off the big moves you see in the series, such as Iida’s Recipro Burst or Izuku’s Detroit Smash.

In the story mode tutorial level, you are told it will build up through combat, with three levels that result in different moves that can be utilised for greater damage.  In reality, most of the matches in story mode would end before I could reach the second level, or my opponent would be so low on health that a level one attack would finish the job.  It was very late in my time with the game that I realised that if you pull off a ‘perfect guard’ you instantly get your bar increased by one, but these moves are not easy to pull off and more often than not I would just end up taking more punishment than if I just went all out on the offensive.

Even when I was able to get the energy needed to pull off my big finishing moves there is a fair amount of luck involved in connecting the attack.  For some reason the enemy AI constantly has your opponent jumping and dashing all around the 3D arena, resulting in the blow missing more times than it would connect.  Considering you get bonus points that affect your ranking and rewards in a battle by using one of these moves as a finisher it is very frustrating, and I all but gave up on trying to gain the rewards and just focused on moving to the next part of the story.

At least you have the different characters and their Quirks to change things up a bit.  Because the characters Quirks give them different abilities some of them have very different play-styles for the player to utilise, however in the story mode you are locked into the characters you have to use for most of your battles and it does seem as though there are some balance issues that will put you at a disadvantage against certain opponents although this could also be due to my own button mashing to cover a lack of genuine skill technique.

One thing I will give MHOJ is that it has a fair amount of content.  The story mode is extended by allowing you to play through the story again from the villains’ side of things, which while a lot of the fights will be the same as the hero side we do get a few interesting bits of background information that otherwise would have passed me by.  There is also a number of ‘missions’ that you can undertake, that allow you to pick your team and try to run a gauntlet of matches to unlock gear as rewards and a training area for those who want to knuckle down and learn the ins and outs of any character.

For those who really want to test their skills, they can take part in online battles against other players.  While I will not go into my own performance in the battles here, other than to say they went rather poorly for me, the game ran smoothly and there were no visible input lag or frame rate issues during matches.  I did get a couple of connection errors intermittently but it was more an inconvenience than anything else.

Overall MHOJ is a game that fans of the series will definitely be able to enjoy.  While it does have its flaws, at its core is solid and easily accessible fighting game that anyone can pick up and have some fun with.