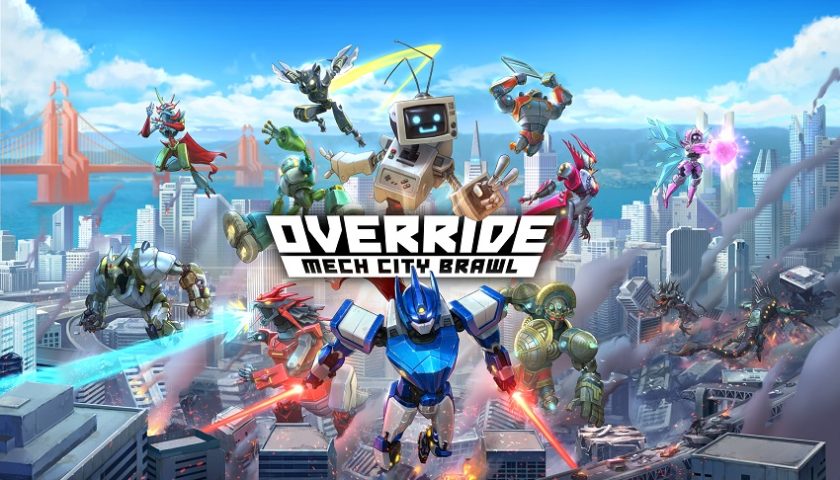 The trailer for Override: Mech City Brawl (OMCB) showed a game that I was excited to play.  Giant robot mechs beating the crap out of each other in locations all around the world with destructible cities serving as the backdrop.  Sadly, OMCB gave me a bland and repetitive story that felt little more than a tacked-on afterthought.  It didn’t properly utilise the main premise that was promoted in the trailer, eschewing the mech vs mech action and instead opting to give a sub-par campaign that has you taking down rejects from the Pacific Rim franchise.

The Arcade mode, which encompasses the single-player campaign experience, and as such could have just been named “Campaign”, drops you into Tokyo, where you have to fight off giant creatures known as Xenomorphs. Upon your success, you will be recruited into the military and dispatched on missions to keep fighting these creatures in various locations around the world.  There is a story buried in the game but let me tell you it is not much of one.  The story missions only pop up after you have completed a number of filler missions, and they are only story missions in the sense that you experience a boss fight and are provided with further exposition as to what is actually going on.  Rinse and repeat and you have the whole premise of the campaign.  It is something that gets very tiresome very quickly.  The only difference to this formula is when you get to fight another mech, an event that only occurs twice in the four to five hours it will take you to complete the campaign.

One design choice the team at Modus Games made, in which to restrict the player to the one mech they choose at the beginning of the campaign, left me feeling confused.  Having played through the story I can kind of see why they went in that direction, however, I would have loved to have been able to utilise some of the different mechs.  There are twelve mechs that look great and have a variety of play-styles that go with them, from the close-up brawlers to ranged based attacks and all-rounders.  It would have made the game a lot more interesting if the developers had built missions so that all of these different mechs would have a moment to truly shine and the opportunity to experience this variety for themselves.

My thoughts keep coming back to the way that NetherRealm Studios built the story modes for the rebooted Mortal Kombat and Injustice series, where the player gets to experience a number of characters and their styles as they make their way through the game.  It is also a shame that the developers didn’t choose to include a traditional ladder battle system to complement the campaign story.  You do have the option to combat AI mechs through the local VS mode, but it feels empty and pointless.  The inclusion of a traditional arcade ladder mode would allow players to get more value out of the game and make the game feel worth the cost of purchase.

The stand out of OMCB is definitely the mechs themselves.  It is obvious that the team at Modus Games put a great deal of effort into the design and creation in each of the individual mechs.  Each of them exudes power and has their own distinct play-style that changes up how a player will approach battles.  What I don’t understand is the lack of information provided about each of the mechs.  There is no information given in the game about the mechs and how they play, leaving it up to the player to experiment with each of them to find out just how they feel.  This, coupled with zero information on a mechs special abilities or what their ultimate moves do, results in confusion while you try to figure out just what your chosen mech can do.  In an age where players no longer have a manual to provide this sort of information, it is critical that they be able to access it in game.

The saving grace for OMCB comes from the couch-based multiplayer action.  Jumping into a game with one, two or three friends leads to some wild brawls, especially when you choose the free for all option, with up to four mechs involved.  These battles can be a lot of fun, and truly show off just how fun fighting in a giant mech can be.  If you are feeling really adventurous, you can team up with three other people and try your hand at group fighting.  Just like the Power Rangers, you and your co-pilots can take control of one mech, with each of you responsible for a certain part,  and try to defeat your opponents.  While I was unable to get a group of four going, just having two people trying to control a mech was chaotic, even with the two of us sitting right next to each other.  I can only imagine the total chaos if you were to play with three other people and not be talking to them.

If you don’t have any friends to jump into a fight with you can try your hand at the three online modes.  There are the standard VS modes for ranked and unranked matches or the craziness of a four player free for all.  Unfortunately, during my time with OMCB finding an online match was difficult.  After spending about twenty minutes trying to find a match over the three different modes I gave up.  There was one time when I was able to get into a match, but the lack of finding an opponent on this side of the world meant the match was full of input and graphical lag, hampering my ability to really get into the battle and enjoy it.

Override: Mech City Brawl does have moments where players can have a lot of fun, but between the bland storyline and poor design choices it is a game that seems to have struggled with its own identity, removing what would be its greatest asset from the storyline by focussing on generic enemies rather than the mechs that could be showcased.  Between the issues with the game itself and the problems with finding a match online, Override: Mech City Brawl is a game that for most will sit on the shelf collecting dust, except for the occasional round of mech brawls when you have a friend over.