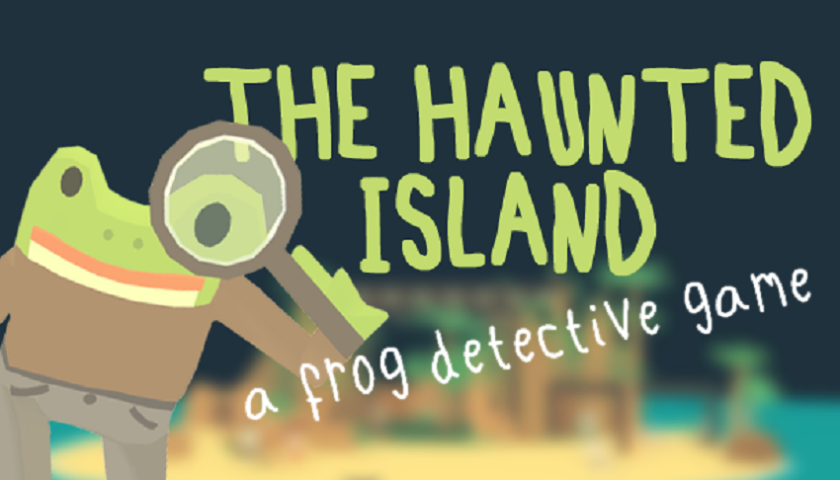 The Haunted Island – Puzzled by Kindness

The Haunted Island by Grace Bruxner is a short indie adventure game, where you play as a Frog Detective, investigating the mystery of a ghost on the aforementioned island. It’s a fairly straightforward affair, with you walking around in a first-person view, interacting with the other characters on the island, or examining your surroundings for clues with a trusty magnifying glass.

There’s a certain style to the characters, island, and general art style – enough to sing some details but the best way to put it is cute. The characters you interact with all look nice and friendly, and they have a style that works for the game.

It’s quirky sure, and even its music seems like a nod to pseudo-noir, carrying a calm breed of jazz that’d sit well alongside the repetition of snares and snaps in a Badalamenti score, such that one might assume it’s a nod from one wholesome investigator to another.

It isn’t an especially big game, and the island itself is smaller than one might expect, but it’s long enough to fill, doesn’t drag, and wraps up in a nice, neat package. It does still leave you wanting a little more, whether it be the island or the world it exists in, or other facets in the life of the frog detective, but that is as much a challenge for the player and the greed of their own curiosity. We always want more, until we do not.

There is misdirection without being mean to any of its characters. It’s the epitome of a wholesome game, and though its trappings and style may suggest an affair for children, it doesn’t feel like that’s the intended audience. It is so kind in spirit.

The big strength of the game is its writing, in the way that everything it delivers feels consistent without being predictable, and is flavoured with humour. Much of the clever dialogue relies on a smarter appreciation of language, but in a way, there is something for younger audiences too. There isn’t any voice-acting in the game, so if you are playing it with younger kids around, you’ll have an excuse to do voices for them.

What is best about The Haunted Island is the way it uses the intentions and aspirations of the characters as the key to its puzzles, rather than it being complications borne from conflict. It is like the perfect group of friends, where they encourage you to be your best self because each wants the rest to succeed on their own terms. To have that captured in a game is refreshing.

It’s also a perfect call for more indie games to embrace this tone. Kindness and humour are often linked with frivolity, perhaps not taken so seriously, yet maybe it is the attitude and approach that needs to be fostered. It doesn’t have to be the end of the world to be worth your time. It is far more common for a game to shoot for making the player feel horrible, yet The Haunted Island wants them to feel good. We should all get that chance.