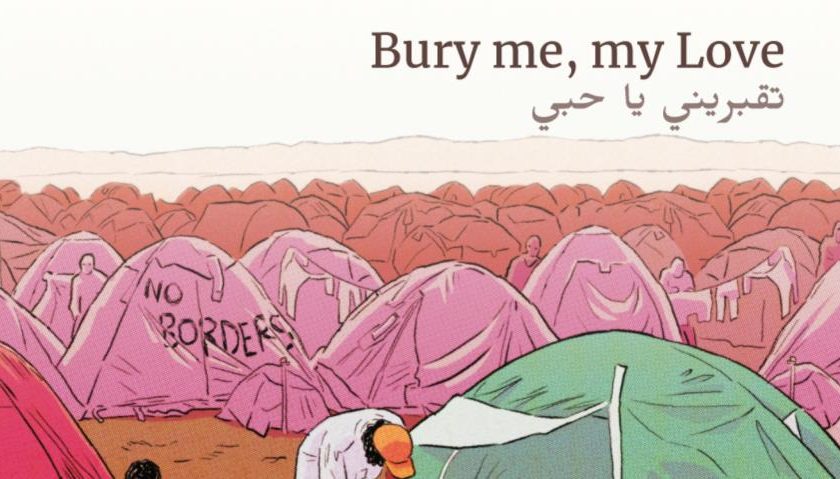 Bury Me, My Love – Against All Odds

As mobile devices have become more and more sophisticated, and the general consensus surrounding games on the platform has slowly changed, more and more developers have looked to explore a myriad of different approaches to telling meaningful stories on the platform. Bury Me, My Love, a pseudo-real-time story about a Syrian Refugee is the latest, and frankly, one of the best implementations of mobile phone interface approach.

The entirety of Bury Me, My Love plays out via an instant messenger app, the exchange occurring over the course of several days between a husband and wife pairing. You assume the role of Majd, the husband who is corresponding with his wife, Nour, as she begins her attempt at fleeing Syria. As Majd you’ll only be in a position to respond to what Nour is sending you, she may be looking for advice, comfort or support, and how you read into the messages she sends will impact how you internalise what she’s saying, and by extension, how you respond to her.

This is no Telltale story though, where all branching paths, regardless of the choices you make lead to the same location in the end. The story of Bury Me, My Love presents to you a singular goal, helping to guide Nour across the border, away from the dangers of Syria, but that story can be cut off at any point should you both make a poor decision that endangers Nour’s life. Having explored multiple pathways to this point, many of which aren’t especially obvious, I’ve seen the story suddenly splinter off on a new divergence path thanks to one small change in the conversation. Maybe you encourage her to take the canoe over the river, maybe a truck, maybe it’s better to stay still here and risk not being discovered. All of these combinations and permutations are playing out through the back-end systems whilst in the meantime, you’re continuing to converse with Nour.

I’ve regularly found myself in sticky situations with family and friends over the journey, where the ultimate source of the problem amounted to one party or the other (and even sometimes both) inferring too much or too little tone from the message. Someone might sense aggression where there was none, or not understanding that a joke or the use of specific emojis were masking an underlying issue, and the concern I had going into this experience was that without that relationship, I wouldn’t have the investment in the characters (unlike my life scenario where I’ve often had many years or real interactions with those people) to care either way. Well, it turns out that the heightened stakes of the situation that Nour and I found ourselves in flushed out all the same reactions that I’d have with any of those who I dearly cared for. The majority of the exchanges play out before you, and you’re asked to contribute at only very select moments, but when I did, and Nour didn’t react in the way I’d expected given what I’d said, my same instinctive reactions kicked into gear – the difference was, the game wasn’t designed for agency at every moment of the story. This meant I was often left in fits of anxiety; had I done the right thing? How on earth is she going to escape now?

That design approach, as engaging, and sometimes emotionally draining (in a good way!) as it can be, might also serve as the games only Achilles heel. I know that should a message not be received by the recipient as I’d intended it that I can clarify that, via message or a call, and ensure that there’s no miscommunication at the end of the day. Because I’m lead by the hand for 95% of my exchanges with Nour, I did feel a little bitter on occasions because I didn’t have the ability to respond to a situation, one that is played out in a very day-to-day way (by Instant Message), the way, I, Paul James, would, I was at the behest of the development team. Of course, this isn’t the only thing impact Nour’s ability to escape either. There’s her own state of mind that you’re trying to support and nurture, her budget, and you need to be resourceful, some inventory management is necessary as well. All facets have a significant impact on whether Nour can safely escape Syria.

As well as being on mobile, the game is also found on Steam and the Nintendo Switch, which both provide more traditional gaming controls, but whilst I picked the game up on Switch, I found myself detaching the joy-cons and playing as I would if it were on my phone anyway. The feeling of playing with a keyboard and mouse or with traditional gaming controls, actually detracts from the immersion of the experience, so playing Bury Me, My Love on either a phone or the Switch is absolutely the optimal way to experience it. The length of your experience may vary, given the potential pathways you can explore, and even just down to how long you deliberate over some of the choices you have to work with, but most playthroughs will cap out in the 1-2 hour mark.

Bury Me, My Love, is an Arabic expression that conveniently enough roughly translates to “Take care”, and the name is wonderfully representative of the experience that lays before you. Take care, think through your options, pay attention to what Nour has to say, what she’s seeing, and then pair all of that with your instincts and you may yet get her across the border safely. A gripping experience that stems from such a simple, minimalist gameplay concept is a rare thing indeed, but what both The Pixel Hunt and Figs have accomplished is nothing short of astounding. If you’re anything like me, your adventure will come to an end and you’ll be as emotionally spent as I was.