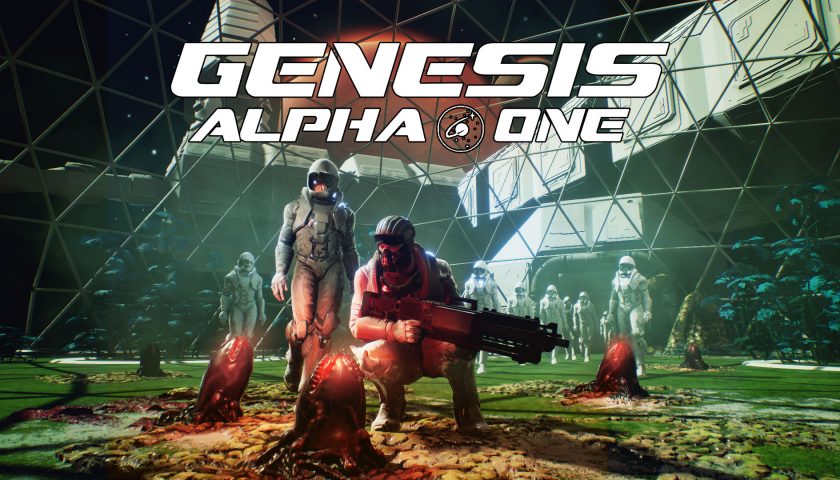 Genesis Alpha One – Death by Repetition

I’m generally not a fan of losing progress, so the lack of proper save points in this FPS rogue-like felt incredibly stressful to me, especially as the opening aspects of Genesis Alpha One are, by necessity, quite repetitious. You always have to add new modules to your fledgeling ship, which requires resources that you have to physically search for and mine. You also always have to try to get your crew numbers as high as possible in order to alleviate the intense dangers of space. It doesn’t help that the crew, one of whom you randomly take control of, are as strong as tissue paper and will often die from an alien spider’s unseen ankle attack before you’ve even managed a half-decent Picard impersonation. Once you die, you automatically take control of another crew member, until there are none left alive, whereupon it’s game over.

Progress comes in a couple of forms. First, in the starting choice of corporations, which unlock as you play, offering bonus starting conditions such as more crew or a ship with more starting modules/weapons (modules are connectable spaceship rooms that, over time, create a massive, space-faring warren). You can also start new runs with any artefacts that you have uncovered and these give your character suit upgrades, weapons and other perks. This, then, is the metagame designed to reduce the frustration of repetition, except that the repetition isn’t just at the start of the game, it *is* the game.

Everything is busy work. For example, this is what happens when you jump between systems: you first have to go to the bridge and access the map computer to choose where you want to go and engage the hyperdrive. Then you have to find the tractor beam room/module, which could be close by or a long trek depending on how you’ve designed your ship. It’s usually one of the first things you build, but heck I dunno, maybe you want your character to count his daily steps or something. Anyway, you’ve got to go to the beam room, find the computer console in there and then manually scan every planet and debris field on the map. This requires you to hold in RT for about fifteen seconds. Repeat this six or eight times and you’ve got a list of planets and debris with their attached resources. In order to *get* those resources, you’ve got to turn the tractor beam on and wait half a minute for it to extract *one* resource at a time, or you can visit planets physically and use a special gun to suck up resources yourself, all while fighting off the planet’s aggressive alien life forms. They’re *always* aggressive and always some kind of insect or worm thing that’s impossible to get a bead on. There’s no first contact here, just low-form-aliens that want to kill you quickly. When you’re on a planet, your ship’s storage fills up really quickly, so you can’t completely strip a landing site even if you want to. Then it’s back to the main ship, making sure you’ve got a refinery to refine what you’ve mined (don’t ask me why the tractor-beamed resources don’t require this step, I don’t have the answers). Oh, and if you haven’t built enough storage, which also requires resources to build, then you’ll end up with a real back-up problem, and no one wants aluminium lurking near Uranus!

Graphically, the game wanders between nicely reflective but generic sci-fi environments, through to rather ugly, is-this-still-in-test-phase menus, build map and text boxes. Your crew is so plastically boring that they are the epitome of un-lifelike. They’ll wander about, dutifully doing their jobs, but don’t expect anyone to acknowledge your presence or to have anything to say in conversation beyond spouting tech help dialogue. No one has any personality and death has zero impact on the crew beyond transferring captaincy to one of them at random. It’s this general lifelessness that makes me feel that repeat playthroughs will suffer, with the player offered little to connect with beyond the work-like tasks needed to progress.

There are a few dangling carrots that might keep you going, such as the ability to splice alien DNA into your crew members so that you can deal with harsher planetary environments. But again, this requires a fair bit of work, collecting enough samples and then also collecting the correct plants to put in the greenhouse to accommodate a crew’s growing diversity.

I don’t know if it’s enough. I kept waiting for something cool to happen, but it never did. The game became monotonous and I found that I just didn’t care about finding a genesis planet. The threat of high danger areas on the space map also meant that much of my game was spent hopping between red zones, trying to find an area of space populated with planets and debris so that I could actually do something. And while the building aspect is, I guess, fairly cool, in that you can technically build your ship however you want, it still boils down to a huge, floating LEGO mess in space. I never managed to harness enough pride to worry about my overall design, so I was constantly getting lost and turned around wrong, trying to work out where my clone lab was.

And before you think this might be a No Man’s Sky alternative, it isn’t. When you “explore” planets, you can’t wander very far from the dropship at all. There’s nothing to explore except for the specific plants and minerals that you need to harvest, and there are always some annoying aliens that will kill you quicker than you can say, “New captain promoted”.

Overall, I’m left with the feeling that this really does rely on a certain type of gamer, one who embraces death and repetition, who doesn’t mind busy work for small reward and who takes the time to build an actual functioning ship layout. I guess my main issue is that it doesn’t excel in any of its pursuits. It’s not a strong shooter, nor do you explore with any freedom. As a shipbuilder, the variety of modules is slim, and as a rogue-like, the repetition far outweighs the game’s limited randomness. And when an alien infection inevitably takes over your entire ship, you’ll watch in horror as you burn through every cheap life on the ship before being faced with the question: do you really want to go through all that again?