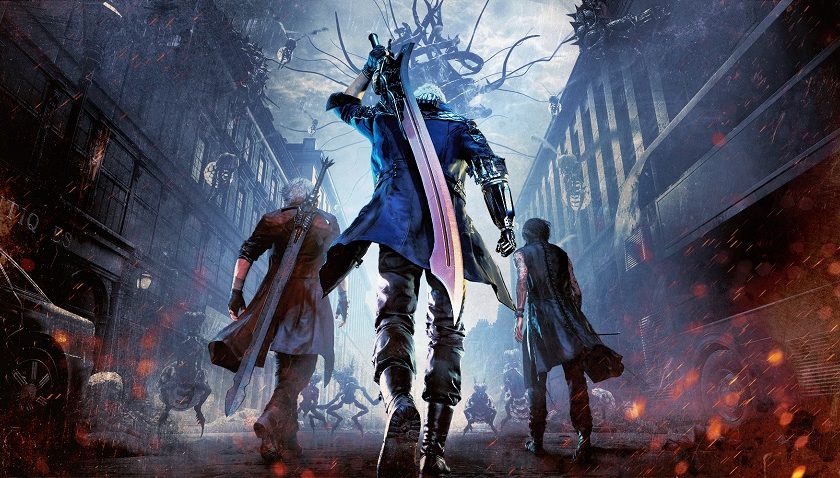 Today started like many others. I rolled out of bed after not enough sleep, I fumbled through my apartment looking for my keys, my phone, my wallet. I stood in front of my dress rack for 15 minutes trying to pick an outfit, hopped in an Uber and culled a horde of demons with a panther and bird.

What, that’s not how you start your day?

Ok, well, I’ll level with you, it’s not normally how I start mine either but today was different. Today I got to play some of the upcoming Devil May Cry 5, and lemme tell you; it was pretty rad.

I haven’t played a DMC game since DMC 2. It was one of those titles I hired from the video store (giving my age away a little there) and all I remember about it is that I really enjoyed it. But then for some reason, I never played another one. I don’t know why; it has all the elements of a game I normally enjoy: good looking people in tight fitting clothes, lots of explosions and a tonne of bad guys to hack to pieces. After getting to experience some of the latest instalment, I think this might be the one that finally gets me coming back.

I had limited time with the title but I did get to finish two missions and meet two out of the three playable characters; V and Dante (with the third playable character being Nero, who we’ve met before). Dante is the main man of the franchise who we all know and love, but V is someone we’re meeting for the first time. Compared to Dante, he’s kind of weedy. He reminds me of the nerdy little noodle boy who just wants to hang out with the cool kids, but who never quite fit in. He’s got a smart mouth and a smartass attitude and despite his weedy exterior, I kinda dig him.

Unlike Dante and Nero who wield badass weapons, V goes into combat with nothing more than a cane and a book. But he has a secret up his sleeve: demons. V can summon three different demons alongside him to help him fight: Shadow (a panther-esque companion that attacks close range), Griffon (a long-range bird companion with an attitude- think Iago from Aladdin but more badass) and Nightmare. Nightmare is…well, he’ll just wreck shit, let’s put it that way.

V doesn’t actually do a lot of fighting himself, but he does serve the final blow on all the bad guys you annihilate. He’s incredibly different in playstyle from both Dante and Nero, which is an interesting design choice. For a hack and slash action adventure, it seems like an odd choice to include a character to doesn’t do much of the hacking and slashing himself (though you do control Shadow and Griffon in battle when you play as V), but it makes for a refreshing change for the franchise.

In terms of more generalised gameplay, we all know that DMC is a hack and slash. The cooler you look whilst destroying everything in your path, the more ‘stylish points’ you get, and the more points you get the more orbs you receive at the end of a mission. These orbs are invaluable, as they’re the currency you use to learn and level up skills, as well as revive yourself if you die in the heat of a battle. And lemme tell you, you’re going to want to do that. There’s nothing worse than getting a boss down to a sliver of health and then having to quit because you don’t have enough orbs to bring yourself back to life (not that I know from first-hand experience or anything).

Like I said earlier, my time with DMC 5 was limited but what I saw I really enjoyed. The game isn’t doing anything revolutionary in terms of gameplay but does it have to? It looks good, it sounds good, the voice acting and character banter is genuinely entertaining and humorous. And most importantly; it’s fun, and that’s really all that counts right?

Devil May Cry 5 launches on March 8 this year for PS4, Xbox One and PC.