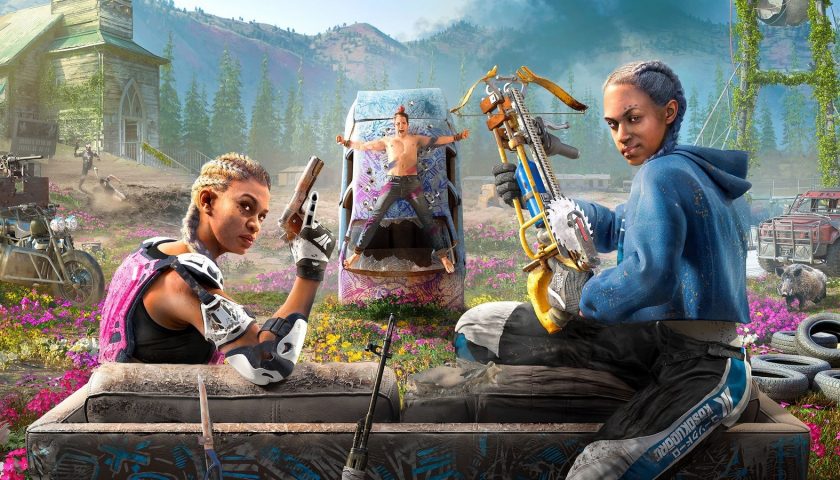 Over the last couple of years, the Far Cry community, as well as media personalities and influencers have been beginning to question the direction of the Far Cry franchise. Was it stagnating? Despite comments to the contrary out of Ubisoft in the months leading to release, Far Cry 5 still played and felt extremely similar to every entry post the release of Far Cry 3 in 2012. A year later, and we’ve seen the release of yet another Far Cry game, and heard several further commentaries out of Ubisoft that things are still evolving. Now that New Dawn has finally arrived the question again has to be asked – Has Ubisoft done enough to shake up the formula?

Taking place 17 years after the conclusion of Far Cry 5, the world has begun to reset following the nuclear explosion that rocked Hope County and the world in general. As the years have passed, mother nature has reclaimed much of the man-made architecture, some animals that survived the blast have mutated as a result of the poison in the environment and a generational disconnect has begun to form between those who remember the past and those whose only memory is of the world as it now stands. The product of all of this change is of course conflict, and as survivors began to emerge, lines were drawn, gangs formed, Joseph Seed’s cult persists and then a small pocket of survivors have bunkered down in a new home base – Prosperity. The threads of humanity that still existed throughout much of Hope County have concentrated at this one location meaning that the remainder of the county is visceral, untamed and unpredictable; it’s also a perfect setting for a Far Cry game.

Hope County is a mess with the Highwaymen (lead by twin sisters Mickey & Lou) controlling the roads and outposts, while in the north the ever-looming threat of Joseph Seed’s cult lingers. Prosperity is under siege and calls on some external help to wrestle back control. You, along with several others are part of a unit dispatched to help the survivors in Hope County but of course, things don’t go well, and suddenly you too find yourself amongst the group of oppressed survivors. Things have been bleak for quite some time but you’ve suddenly become a ray of light and as such, the rebellion against the Highwaymen begins. The conflict eventually intersects with the cult and things begin to take darker and more obscure turns but the narrative, while simple, is an engaging backbone to the experience.

Despite some significant changes being present in this latest entry, New Dawn will still feel quite familiar to those who’ve played Far Cry games in the past. The clashing attempts at between serious and jovial, the first person perspective, the living, breathing environment; it’s all here, but with many aspects having received minor over halls that make those components feel different than they had previously. New Dawn takes inspiration from the Borderlands’ and Rage’s of the world in terms of its setting, its arsenal and its tone. This is perhaps exemplified the best by the Saw Launcher, a weapon that fires out saw blades that ricochet off surfaces and cause excessive amounts of carnage. New Dawn also adopts the same tiered rarity system that Ubisoft has recently been implementing in other IP, and in this case, it extends to both your vehicles as well as your arsenal.

Using the wildlife around you is of course still a major facet of the game, but no longer do you need to skin a defined number of animals in order to unlock a certain upgrade, rather those pelts can be traded in for a variety of different currencies, ethanol, titanium, copper and other crafting components. These components allow you to construct new weapons, and as you upgrade Prosperity, more opportunities will emerge to upgrade your gear from common, weaker levels through to the most elite. This system works quite well and serves as a nice change of pace for the Far Cry franchise. Upgrading your gear isn’t the only thing that Prosperity provides players with; as it grows in size and population, different opportunities begin to emerge. Far Cry Primal was critiqued for using the same map and topography that Far Cry 4 used and New Dawn does the same to Far Cry 5, but what diversifies things somewhat is the inclusion of the Expeditions feature. Expeditions are brief excursions where you take off in a helicopter to a variety of different locations around America with the goal of extracting a significant item from the location. Of course, that item is well guarded so it’s up to you to negotiate the threats, in your quest for survival. Expeditions can be repeated at higher difficulties for greater rewards, similar to the changes made to outposts in the core game; these two can be scavenged at will for ethanol and then repeated for greater rewards.

There’s much to be done in the game too. From the primary campaign to side-missions big and small, there are outposts to clear out, expeditions to complete, treasure hunts, legendary animals to take out, necessary upgrades to Prosperity, co-operative chaos, and guns for hire to recruit – New Dawn, despite its budget price, boasts quite a lot of content to devour.

While many of the systems are derived from its peers, the smart and strategic use of those mechanics serve the Far Cry franchise well and should be refined upon and tweaked ahead of the next core franchise entry. Not everything has been executed upon quite as well as those core gameplay systems, however. For as beautiful as the reclaimed world of New Dawn is, some visual concerns will occasionally cause you problems – thanks to the lush, bright colour palette that has been used, it will mean that on more than a few occasions that you’ll not pick up a nearby goon in his/her vibrantly coloured attire amongst the dense neon foliage. The soundtrack is superb, and hearing The Monkees “Daydream Believer” never ceased to wash a smile over my face, while the voicework of characters big and small was also well done, from those bigger personalities like Joseph, the twins or Hurk to more subtle characters such Kim Rye or Rush.

While it’s only an evolution, rather than a revolution, changes were still necessary to negate a perceived slide in the eyes of fans and critics. Far Cry New Dawn isn’t bringing anything extraordinary to the table, but it is revitalising some ageing systems, adding new ones and closes out an arc that has intrigued gamers as much as it has divided them. A lacklustre final boss encounter and some graphical concerns aside do detract from the experience but overall, Far Cry: New Dawn is a must-play experience for fans of Ubisoft’s superb FPS franchise.