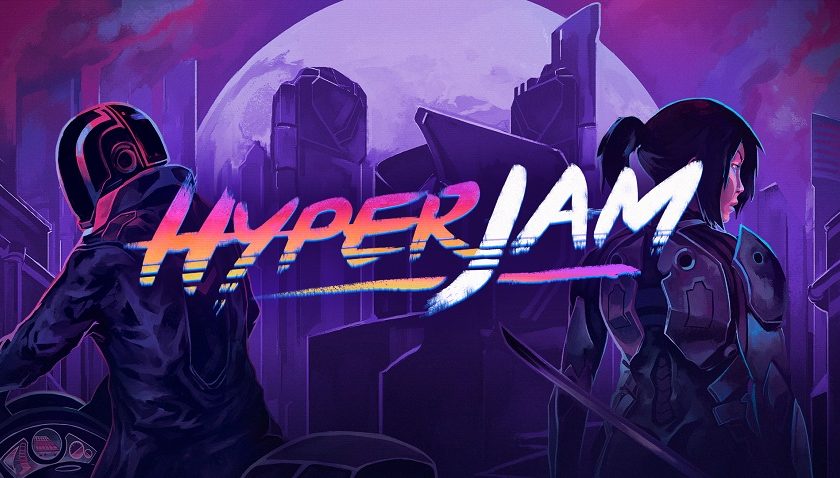 At first glance, one could write Hyper Jam off as a simple party game that’s busted out when your friends pop over for a gaming session. Not to dismiss the quality or enjoyment of titles that fall under this genre (some of our favourite games are party games), more so that this title is so much more below the surface that it deserves more credit. Self-described as an Arena Brawler, Hyper Jam may look like a game lacking content but sure as hell makes up for it by aiming to have the depths of a modern competitive game that many of us have come to expect in today’s offerings.

The developers (Bit Dragon) have made a game that pulls off what we like to refer to as ‘The Smash Bros effect’, simply to learn, hard to master. The gameplay itself is straight forward, the first player to reach the required number of points and then be the last man standing wins. Points are earned from damage dealt, dispatching final blows and surviving a round. The game strongly encourages you to engage as simply standing back and watching the action unfold will net you significantly fewer points than your opponents. As a round starts, a random assortment of weapons spawn across the map, each with their own strengths and weaknesses, each one has a limited number of uses before you’re forced back to your bare fists or until another weapon appears on the playing field.

It’s here where things start to become interesting and the depth of the gameplay starts to shine. Every character has a dash and parry move, both of which will need to be utilised depending on the situation at hand. You’ll also quickly find out that there’s no such thing as the best weapon. For example, the hammer is extremely powerful with a small area of effect damage radius, but it’s slow … really slow, so your timing your blow is much more difficult. Meanwhile, the sword is faster but you’ll need more hits to make a dent on your opponent. If that wasn’t enough to worry about, the maps themselves can become a death trap. With moving cover and pitfalls suddenly appearing, one misstep can be the difference between a dominating victory or instant death. At the end of each round, all players will be able to pick a buff, the person in last place chooses first and in subsequent order until first place is left with the last buff. These range from boosting your dash cooldown, freezing opponents after landing a hit or performing more damage when you’re low on health. It’s hard to conclude whether or not some buffs are more valuable than others, but letting the players in last place pick one that benefits their playstyle before anyone else is a great way that gives them a slight advantage without punishing first place entirely.

The games skill gap becomes readily apparent when you see just how deep these simple dynamics go. Watching a highly skilled player parry your attacks, dash into hitting range and timing their attacks can make them seem untouchable, a hallmark of any decent competitive game. There’s a nice little tutorial to take you through the basics but there were some minor elements left out. Granted these were tiny things, specifically around how weapons can change their behaviour depending on how long you hold your attack button for. Thankfully though, these were easily figured out after a few sessions, but it’s always nice to have a guide that leaves no stone unturned. Another minor annoyance was the Menu UI. If you’re looking for where to customise your character with new taunts / emotes, etc for some reason this is done on the character select screen. This is hardly game-breaking by any stretch but annoying none the less. to, so there’s no hidden moves or tech that you’ll miss out on by not having these spelt out for you.

At the end of the day, Hyper Jam is a simple yet deep Arena Brawler that rewards the more skilful player. Combat is intense and fast and it’s important to note that the net code itself is smooth and very stable, a quality that many AAA games sadly lack. There are limitations though. The only single player element is versing the AI, which can grow a little stale over time, so unless you have some friends regularly popping over for some sessions, you’ll be left to find games online, which can be a hit or miss affair. At the time of reviewing, it was taking about 4 to 5 minutes to secure a match online, so it’s extremely reliant on the community numbers for this game to succeed long term. Thankfully we can recommend you check it out if you’re after a game that’s intrinsically rewarding, has a high skill ceiling and is fun to play at all levels!