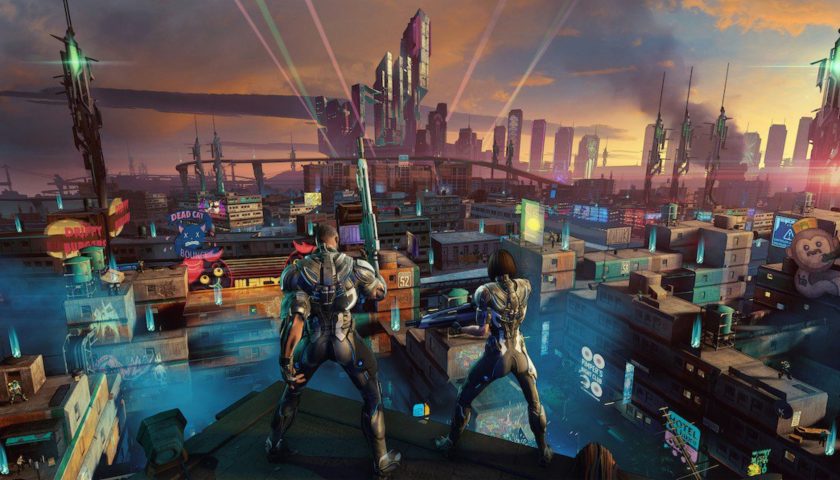 During his recent trip to Xbox HQ to play Crackdown 3 (you can read the single-player preview here and the multiplayer preview here) Matt got the opportunity to sit and have a chat with Jorg Neumann, Head of Production at Microsoft Studios Publishing and Joseph Staten, Creative Director at Microsoft Studios. The topic, Crackdown 3 of course and this is what they had to say.

First things first, you must feel relieved after such a long and public development period.

Jorg: I think we are excited more than relieved. We set out to make a game for Crackdown fans and to innovate at the same time with the cloud destruction and it all came together. We are really proud of how it all worked out.

Speaking of the could servers, Microsoft has been talking about what the cloud can do for gaming for quite some time now, is this the game that finally shows that off to the world?

Jorg: For sure. It has never been possible to do this before. The unique thing is we are using Azure to do the processing and that allows us to keep all the tech lines instep. The destruction that is happening on one machine is happening at the same time on another without impacting the console’s processing. The key moment for players is when the destruction becomes tactical and as you play you will see that

Joseph: You’ve seen tactical destruction in games like Rainbow Six: Siege on a small scale. It’s about breaching this door or wall. Crackdown ratchets up the scale of the destruction. It’s not about going through a door, it is about blasting through a skyscraper. It’s not about taking the room, it is about taking down an entire set of buildings. That is only really possible because we set up this cloud computing to handle all of the physics off-site. The other thing that is really cool about cloud destruction is that the experience is the same on all platforms. It doesn’t matter if you have a brand new Xbox One X or a day one original Xbox One, that destruction experience is the same. There is no downgrade in that experience apart from the 4k graphics. There is no difference as to how the city looks or what you are able to do with the destruction tactically and I think that is a pretty magical thing for people that do have old hardware that kind of expect a lesser experience to those that have the latest and greatest.

Jorg: and the other cool thing is it doesn’t matter where you are in the world, there are so many banks of Azure servers that pings are not a worry.

Is there any leverage of the cloud technology in the single-player campaign?

Jorg: Well there is plenty of things to blow up

Joseph: True but it isn’t the same beast as the multiplayer and that is a design choice. We came to a realisation as we developed these two modes in tandem. As you go as an Agent into a city to save it, it’s a little bit counter-intuitive to reduce the city you are trying to save into a pile of rubble. You are a liberator, not a destroyer. The second thing we discovered is when you destroy all the buildings that great vertical gameplay of Crackdown goes away. In a multiplayer game, of course, you start a new session and the map is back to normal. It just doesn’t work that way in the campaign. So those two realisations came together to keep destruction out of the campaign. There wasn’t actually any technical reason why we couldn’t do it, it just didn’t make sense.

Crackdown 3 has been in the public eye for quite some time. It has been bashed a fair bit because of that public development, was there ever a point where you doubted the game, where you lost faith?

Jorg: Never, Development can sometimes be hard but we knew what we wanted to make, a crackdown campaign that people who loved the first game will get a kick out of and we have done that. And we knew we wanted to innovate and anytime you do that in this industry you take a technical risk which is less predictable on time but we cracked it and I think this is, in my opinion, this is really ushering in a new era of gaming because this really affords us the ability to make things happen all over the place and provide experiences that have never occurred before. Plus the extra time to polish everything was also great.

With the single player, was story a priority for the game or is the story simply there to facilitate having fun in this superhero sandbox?

Joseph: First and formost Crackdown is this comic-book inspired sandbox with the freedom to tackle things as you see fit. Just like the original crackdown game, once you are in the open world there are no loads until you die. From that moment you are free to go wherever you want. If you want to go right to the tallest tower in the world and tackle the final boss in the game you can, it probably wouldn’t go well, but you can do it. This means the story had to be completely flexible. The best way to describe it is it isn’t a linear story at all, it is broken into little nuggets, little chunks that you can engage in an order that you want. So the way we wrote the story was to facilitate that unique style of gameplay. It means there is some compromise and some unique story telling techniques but there is absolutely an enjoyable story to dig into.

Jorg: It’s not a narrative driven game but I would say there is a wonderful narrative to explore with the super cool cell shaded comic book style we implemented and it fits the world and what we are trying to do wonderfully.

When the game releases what is the one thing that you are most excited to see in players hands, the one feature you want to see the community get a hold of?

Jorg: for me it is the multiplayer and the cloud destruction. It is so new, so unique that I can’t wait to see it blow people away. I can’t wait to see what tactics come about because of this new technology. It is going to take a little bit but I think we are going to see some crazy things.

Joseph: I think there are going to be two groups of people. There is going to be a group that jumps into the campaign, picks Terry Crews as their character so they can listen to all the funny things that Terry says and have a blast in our open world. The other group of people are going to dive deep into the freedom the multiplayer offers and I love that our game caters to both.

Finally, what is the future plan for Crackdown 3? You have been developing for so long are you just going to have a drink and see what happens or do you have plans for what is next?

Joseph: Well I think we are going to have that drink because on day one will be super happy to have people finally playing and enjoying it. As of today… we don’t have anything to announce.