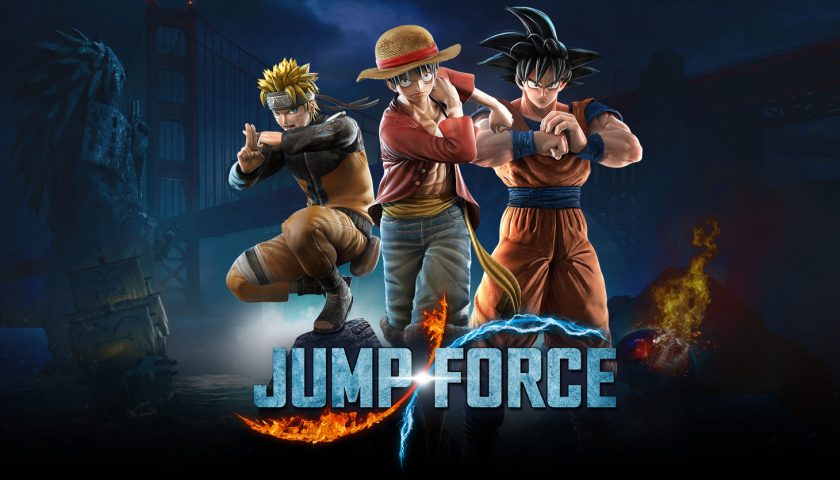 Jump Force, the Anime fighter mash-up developed by Spike Chunsoft was created as a celebration of the 50th Anniversary of the Weekly Shonen Jump manga series that has brought us the likes of Goku, Luffy, Naruto, Yugi-oh, and so many more wonderful characters.  However, while the game was meant to be a celebration of the worlds of Shonen Jump, it is tarnished by poor design choices, an inordinate amount of loading screens, and a poorly written story compounded by a lack of personality in the characters that should be the stars of the game.  In playing Jump Force it seems like Spike Chunsoft has taken a lot of inspiration from the Dragon Ball Xenoverse series and decided to apply it here, with some mixed results making for frustration gameplay.

The story component of the game has the worlds of Shonen Jump colliding with the Earth, bringing the various characters of the Jump worlds into the real world.  After being injured during a fight between Goku and Frieza, you are imbued with the power to be a hero and join the Jump Force to help save the world.  As far as the storyline goes, it is not the worst to ever grace a video game.  In truth, trying to find an adequate story to tie all of these different manga worlds together would be quite a challenge for any game development company.  What really brings it down though is the way these characters are portrayed in the game.  While there is Japanese dialogue present in the game, it is not used in all of them so anyone that does not speak Japanese will be doing a lot of reading to keep up with what is going on.

The big downfall of this is that the characters lose their own personality, and instead of getting a feel for who they are (especially if you don’t know the character all that well), you are left with your own voice in your head.  It just removes context out of interpersonal dialogue and leaves you feeling disconnected from the characters.   This is compounded by poor animation in the cut-scenes, with movements and facial expressions that just leaves you feeling off as you watch it.

Another moment that disconnects the player from the story is when the player is prompted to pick which team they want to join.  There are three different teams lead by Goku, Naruto, and Luffy, each one of them performing different aspects of the Jump Force operations (front-line combat, scouting etc.).  The game has you go around and speak to each of the three team leaders before confirming which team you want to join and then does nothing with it.  The only effect is to give your character abilities and a fighting style similar to those team leaders.  This choice is then made irrelevant shortly after when you unlock the ability to purchase different abilities anyway.  Story-wise there is no effect on your choice and you will end up fighting alongside members of the different teams anyway.

As mentioned earlier, Jump Force has taken a lot of inspiration from the Dragon Ball Xenoverse (DBX) series.  In between missions the player can make their way around a central world hub that is filled with different stands for online/offline battles, abilities, and different costumes.  If you feel like taking a break from the storyline there are a number of side missions you can undertake, starting with easy ones and making your way up to expert level.  Much like DBX, playing through these side missions will earn you experience, gold, costumes, and new abilities, however, where DBX gave you alternate scenarios and recreations from Dragon Ball lore, the side missions in Jump Force are purely there for filler to help you earn gold and experience points.  I was actually stumped for a while on one of the training levels and constantly getting thrashed by the AI opponent.  It was only after I went back to the menu that I saw that there was a five level difference in difficulty between training one and training two.  From then on I paid more attention to the recommended level of a mission before just jumping in.

One of the biggest issues I had while playing the game was just how much time you spend looking at a loading screen.  Every cut-scene is preceded by a loading screen, and after a while, it gets really frustrating and I was spending more time scrolling through my twitter feed than actually playing the game, for example, Loading screen … cut-scene … more loading screen … cut-scene … more loading screen … fight … loading screen.  I would spend more time watching the loading screen than watching cut-scenes and fighting combined.  When we can have giant open world games like Fallout 4 render our custom created character in real time for cut-scenes, I don’t know why we have such an absurd amount of loading screen time wasting in games coming out today.  The long load times cannot even be blamed on the graphical level present in the game.  While the backgrounds have had a lot of time and care put into them, the characters themselves look like action figures that have come to life.  In trying to bring all of the manga characters to life they have had to take their myriad art styles and try to fuse them into something that works for all of the characters, but it just feels off.  I will admit though, watching Goku’s high definition plasticine looking hair bob and sway as he moves in cut-scenes is kinda hypnotic.

While it seems like I only have negative things to say about the game, the one thing that does stand out is the fighting.  With 40 different characters to choose from you will have no problem building the ultimate team for your own play-style, however, you can’t go into the game thinking you can just stack your team with Super Saiyans and obliterate everything in your way.  There is a nuance to the characters that helps to balance out the expected differences, enabling Yugi Moto, fighting through the powers of his duel deck to take Goku head on in an even playing field.  The combat follows the same sort of style we have seen in Bandai Namco published anime fighters, with light and heavy combos tied to the press of a single button.  Much like these other games, button bashing will get you through most of the storyline without a problem, but if you want to really go head to head against other opponents you are going to need to put the time in to learn all of the little intricacies of the combat system and how best to utilise the skills of your team along with their strengths and weaknesses.  This would have been helped if there was a bio for each of the characters accessible through the game, which would also help players learn about characters that they may not have heard of previously.

The battles themselves are fast-paced and there has been a lot of care put into recreating the signature moves of every character to see them played out in the middle of a battle.  Sometimes it can be a little hard to see what is going on due to the explosions and sudden camera cutting as certain special moves are triggered, but the game camera is always locked on to your opponent so you won’t find yourself getting pummelled from behind while the camera is looking off into the distance.  While I have said that I am not a fan of the character models, I do like the fact that they all show damage, with clothes being torn and getting dirty as the fight goes on.

Jump Force is a game that could have been so much more.  Strip away the poor story and questionable graphical choices and you have a great fighter that has real potential.  It is just a shame that this is overshadowed by the failings from the rest of the game.  Hopefully, there will be some patches in the future that are able to cut down the load times, but if you ever wanted to see what it would be like to take on some of the toughest characters in the Shonen Jump world then maybe you should give Jump Force a chance.