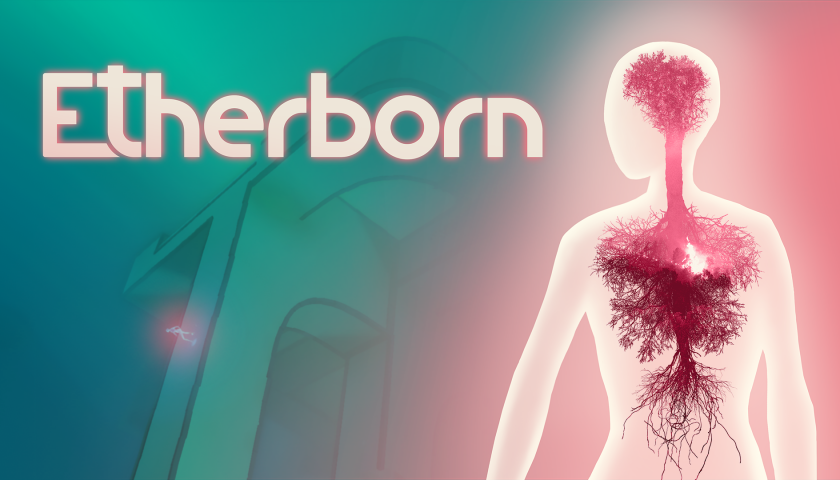 There is a documented history between puzzle games and myself and doesn’t read especially well. Historically, save for a small number of exceptions (most recently Death Squared) they’ve just not clicked with as they have with others, thanks to their often unforgiving nature and abstract expectations that have left me shaking my head afterwards; though admittedly, I sometimes think my brain isn’t wired properly to work my way through the occasional grind. Recently, a preview code for the upcoming Etherborn slid across my inbox, and I thought that I was in for the same sorts of headaches, but for a myriad of reasons, Etherborn seems to be striking a chord – and it might do the same for you two.

Etherborn, a visually striking, environmental puzzle platformer is looking for you to adjust your perspective to overcome the three worlds that I was allowed to play in for this demo. It seems that with what Valve achieved by releasing Portal all those moons ago has emboldened developers big and small to toy around with gravity and what’s possible with it – Etherborn is shaping up to be one of the games that best utilises gravity mechanics to deliver a puzzle experience that is well worth keeping an eye on. Where Valve succeeded in first person, however, Altered Matter is looking to do the same for third person puzzling, with players needing to overcome a series of three-dimensional puzzles that will require some brain contortion in order to overcome them.

You’ll be latched onto a large cube-shaped world that has been cut away at or manipulated in other ways to create layers, and should you step off the edge of one layer you’ll be pulled down to the surface below (if there is one) by high levels of gravity. At least based upon the demo I had to play, the gravitational pull of the world will always be perpendicular to the player meaning you won’t find yourself being suddenly flung left or right, but you’ll always be pulled downwards. While stepping off a squared-off edge will result in a fall from one platform to (hopefully) another, there are also some rounded edges too, and traversing these will actually allow you to flip your perspective somewhat, without falling to your death.

Upon booting up the demo it was immediately suggested to me that the best playing experience would be with a controller. Being the scrub with a keyboard and mouse that I am I was one step ahead of them already with a controller at my disposal. What I was stumped by however upon beginning to play was the default button mapping. A familiar pairing of the A and B buttons to run and jump respectively is well understood by gamers, so imagine my head spinning off of its shoulders when I realised that the default controls were A to run and X to jump. Ergonomically this setup simply is not as effective as the tried and true pairing and thankfully the options are there to change this, but adjusting the default loadout should be chief among the list of things to tweak and/or fix ahead of the full release. For mouse/keyboard users, this concern should be less pronounced and less of a concern.

In terms of story, we’re only introduced to the smallest sliver of what could actually be in store, and it seems to be honing in on questions around humanity, what that means and our place within a wider universe. How that explains the situation we’re in remains to be seen however, but for as much as didn’t make much sense in that regard, the questions the game was posing of me had my attention at the very least. I will be interested to see how this is fleshed out in the final product, but also how the gameplay and scenario collide with that story.

Aesthetically, Etherborn is a striking game, the washed-out hues of the environment are eye-catching whilst the misty outer regions of my line of sight actually served to make the world look and feel bigger than it really was, and created an illusion of mystique that enveloped the location with a sense of magic. Sonically, I often found myself being consumed by the soft chimes and delicate piano tunes that glided through my speakers, consequently forgetting to actually play the game.

Though ultimately just a small slice of a presumably much larger experience, there’s much to like about Etherborn. From the core gameplay systems in place to a fantastic sense of style and tone, Altered Matter seems well and truly on the right path here. Should the story amount to something then there’s reason to think that the final experience might escalate to something even greater again and with a few small tweaks, any of the minor gripes I currently have should be easily rectified as well. Watch this one closely puzzle fans.