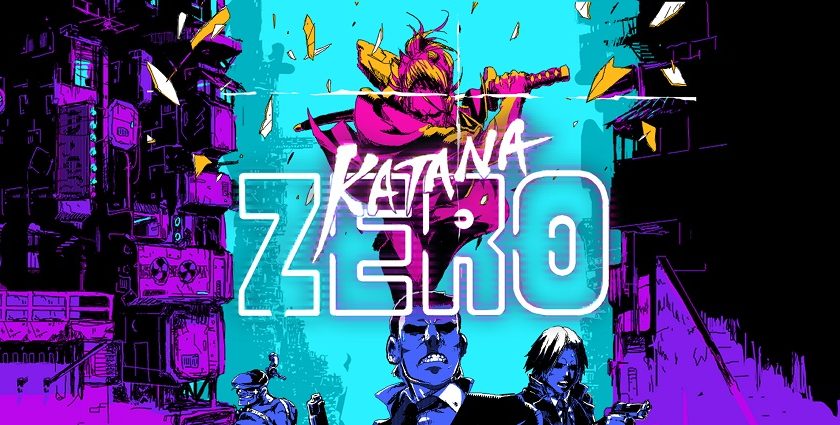 Katana Zero has played a trick on me. It lured me in with swanky 16-bit graphics and a big Samurai sword. I jumped in expecting a tight action platformer and a tough challenge and that is exactly what I got but at that same time, that isn’t what Katana Zero is. No, it took me a while to realise this but Katana Zero is, first and foremost, a puzzle game. It hides this fact well, giving all appearance of a simple action title, but once I wrapped my head around the fact that this is anything but simple, I found my groove. At that point, Katana Zero began to sing to me in a way few games ever do.

Things start off simple enough, you play as a swordsman sent off to assassinate some nasty fellow but before long things start to get weird. I won’t ruin the plot for you because it is fantastic and crazy in equal measure but just know this, it is a tale the dabbles in time repetition, illegal military experiments and the conscience of a killer who can’t remember his past. The game presents the story in quiet moments between the action, giving players time to take a breath and prepare for the next battle but I quite often found myself wanting more of these moments, my need to discover what was happening drove me forward just as much as the excellent gameplay did.

Make no mistake my friends, the gameplay is excellent. Each level consisted of multiple rooms, chock full of baddies to kill. This is essentially the entire game, enter a room, kill the goons, move on to the next room, repeat. There were a few moments that mixed things up like a bike chase or sneaking through a night club, but essentially room-by-room massacre is the name of the game. This is achieved by using a combination of skills that players must master if they expect to proceed. Dodging, deflecting bullets, using the environment and knowing enemy behaviour is essential to progression and the game often requires players to do all of this at once. Thankfully the controls are up to the task and before long things become second nature to players. The game isn’t totally brutal though as players have a special ability that can slow time. There is no penalty for using this ability and quite often it can be the difference between panicked button fumbling and a calm measured victory. Thankfully the game also doesn’t punish you heavily for failure. Die and you simply return to the start of the room, ready to take on the challenge once again. There is even a story beat that explains this ability, which is a nice touch.

So far it all sounds pretty action-y, right? Well, yes it is but it is the moment that you realise that each room is a puzzle to be solved and not just the location for some goon dismemberment that the game really comes into its own. Early on, rushing in and having quick reflexes will get you through the levels but before long the game requires more than that. It forces you to look at your surroundings, plan your approach and use your environment. Many a level I found myself bashing my head up against a wall with a tough room when all of a sudden the light bulb would click and I would realise there was another approach to the problem. In many ways, despite the ultra-fast action, I found that approaching the game like I was approaching a stage in Lemmings led to much better results than simply relying on my skills with a controller. This is where I feel Katana Zero really excels. Once I realised that it was a puzzle to be solved it made me appreciate just how much care has gone into this game, how much thought it must have taken to design these various levels. This is a game that has been carefully planned every step of the way and it is honestly a thing of beauty.

If I had one bad thing to say about the game it is that the writing can be quite jarring at times. Don’t get me wrong, the story is fantastic, but some of the written dialogue feels forced and over-the-top. There is a lot of “tough guy” swearing that may have worked with a good voice actor reading the lines, but as text comes across as immature swearing for the sake of immature swearing. This is a forgivable sin for sure, and it isn’t the only game that has fallen into this trap, but in a game that gets so much right it is noticeable and I feel like Katana Zero would have benefited by having a writer on board that specialises in dialogue.

Forced cuss words aside, Katana Zero is a brilliant game that stands on its own in a way few games do. The one-two punch of tight, challenging action and puzzle solving is a thing of beauty and the fact the story is equal parts engaging and mental is only an added bonus. Katana Zero is a game that has been put together in a way that impresses from start to finish and it has left me with a deep admiration for the thought and skill that went into creating it. This is, a must buy game, even if Aussie Switch owners have to bend some rules to do it, and there should be no hesitating in adding this to your indie collection. Bravo Askiisoft, bravo.