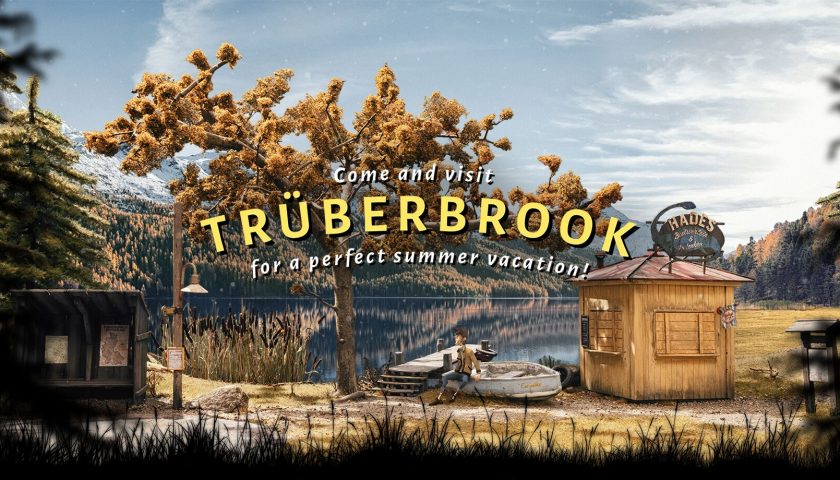 The Point & Click genre was among the premiere genres in the gaming business throughout the 90s. In large part, thanks to LucasArts and their works (Monkey Island, Grim Fandango) the genre boomed on PCs but as consoles began to rise to prominence and the market began to split, the genre then began to splinter off in different directions. On one hand, you saw the reinvention of TellTale Games that began with the release of 2011’s ‘The Walking Dead’, others that attempted to straddle both spaces like DontNod’s ‘Life Is Strange’ and then the dedicated folk who remain committed to the glory days such as Ron Gilbert’s ‘Thimbleweed Park’ to much acclaim. Another contender has entered the ring, one called ‘Truberbrook’ from German studio btf, but can it compete with its older brethren?

Truberbrook is a quaint little game whose story gets more complicated as it progresses. You’re assuming the role of a young American scientist, Hans Tannhauser who has headed out to the remote rural mountainside town of Truberbrook after winning a prize in the lottery. Not all is as it seems though when a mysterious entity steals his notes from Tannhauser’s room during the night, thrusting him into an adventure that keeps you questioning everything and everyone for the remainder of the approximately 4-5hour ride. Tannhauser, as well as the folk of Truberbrook are an incredibly endearing bunch and their many quirks serve as points of levity even as the scenario that Tannhauser finds himself in becomes increasingly dire. Unless you’re the most scientifically minded there are a few leaps you’ll need to make to follow what is going on at times, and that can admittedly be frustrating from time to time but overall the narrative is a reasonably easy one to access and will provide plenty of intrigues, as well as laughs.

One of the things I’ve found most frustrating about traditional point and click affairs is the fact that the solutions, especially as you progress deeper into the experience become increasingly abstract, often leaving you wondering how the developers expected for you to come to the necessary conclusion, without simply interacting with everything in the world until something works. Truberbrook is one of the finer examples of how this style of point and click adventure game should be done largely due to the level of signposting the game gives you. You’ll never be completely in the dark whilst playing, but nor does the game hold your hand and it’s only a very small handful of occasions where you may be left scratching your head, and even in those scenarios, the information is there, you just need to be able to see it.

Aesthetically, Truberbrook is astonishing. Each of the several locales you’ll visit through your time in Truberbrook are real-world hand-crafted, richly detailed models that Hans and others who cohabit the world with you are digitally imposed over. Anything that isn’t a part of the backdrop looks to be a form of very striking claymation which has been superbly rendered on screen. The soundtrack is also excellent, delivering peaceful melodies that only serve to elevate the on-screen actions, the voice-over work is a little stilted on the other hand for some specific characters, though the core cast has been brought to life superbly by their actors.

It’s not all smooth sailing, however. Truberbrook is held back by some unfortunate technical issues from full game freezes, voice-over lines that speak over each other, and a myriad of other little bugs that lock the game up from time to time. None of these were by any means game-breaking, and nor were they frequent, but they were still bothersome and stood out against an otherwise extremely polished experience. Other minor gripes included some spelling errors in the subtitles and some cursor placement issues when attempting to interact with an object that lies in close proximity to others, with the game sometimes assuming you’re going for the other option.

Point and Click adventures such as Truberbrook are severely unrepresented in the current marketplace, and in spite of a number of technical flaws and a few abstract puzzles, btf have shown players what the genre is capable of when given the TLC they deserve. It’s by no means perfect, but with a heart the size of the mountain it backs up to, Truberbrook is well worth the play for genre purists and those looking for some quirky personality in their games.