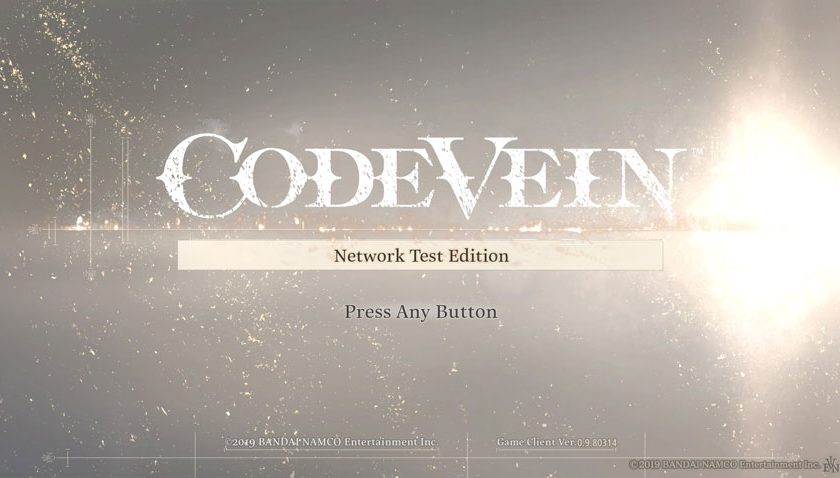 Developer and Publisher Bandai Namco provided a glimpse of their upcoming Action-RPG Code Vein this past weekend in the form of a ‘Network Stress Test’. I came away after completing the vertical slice on offer with mixed feelings but remain optimistic given the promise Code Vein shows.

I wanted to avoid it as much as possible, but Bandai Namco has really put me in a tight spot with some obvious inspirations Code Vein builds upon. Visually, it’s highly reminiscent of Marvelous’ God Eater 3, a title I reviewed on release which Bandai Namco happened to publish. Between its post-apocalyptic setting, stylised anime visuals and scavenged technology costume and weapon designs I couldn’t shake the feeling that Code Vein could have been presented as a God Eater ‘gaiden’ without question – a little digging revealed that the creators of God Eater indeed have a hand in the development of Code Vein. Whereas God Eater was their take on a Monster Hunter title, Code Vein instead takes cues from the Soulsborne series, a portion of which are published by Bandai Namco as well.

As mentioned, the similarities to God Eater are most apparent in the visuals of Code Vein. There’s nothing inherently wrong with the art style and I found it quite striking, despite some repetitive enemy appearances in the level on offer. However, those who find the often-exaggerated female forms of certain anime ludicrous will have similar issues with some characters in Code Vein. That said, the character creator on offer is extremely robust and allows for an extreme level of customisation empowering players to create a character that will suit their specific tastes. Given that it’s possible to adjust player character designs at many points during the game, I can see many hours being spent perfecting a look until the next piece of armour drops wherein the process will start all over again. With FromSoft toning down the ‘fashion souls’ aspects of their recent titles, Code Vein is ready and willing to scratch that particular itch.

Ostensibly, Code Vein can be categorised as an online-enabled co-op Action-RPG with a specific focus on stamina management, timing windows, checkpointing progress at regular intervals and a trial-and-error approach to more difficult encounters – a lengthy way of saying it’s a Soulsborne clone. Code Vein wears this inspiration on its blood-soaked sleeves with pride but also provides a few key areas of difference that I look forward to seeing play out across the full version. Firstly, skills and class have a huge influence over the moment to moment gameplay and both can be switched on the fly – finding a melee approach difficult against a certain enemy? Simply jump in the menu and switch to a ranged class, adjusting the associated skills at the same time. Levelling up affects overall stats and isn’t class specific, so there’s no punishment for experimentation. What this flexibility risks taking the focus off however is the push for players to increase their individual skill level rather than relying on weapons and armour. My own experience showed that a change in weapon almost doubled my damage output during the first game area – it could be that such leaps don’t occur further down the line, but for now I feel comfortable in saying that Code Vein will welcome into the fold players who love the idea of Soulsborne titles but find their demands too high to meet. I’d love to discuss the online aspects, but unfortunately, the server population during this event must have been fairly low as I was only partnered with AI companions.

My biggest gripe overall is the storyline which felt a little forced onto the player in short order. A tendency to tell rather than show combined with a veritable downpour of proper nouns to memorise was an element of God Eater 3 that I found poorly done and it sticks out just as sorely here. Some of the more cliched story beats it employs also failed to engage me, but in the end, the gameplay kept me wanting more. I expect a solid round of balancing before release, which seems to be par for the course for other Soulsborne inspired titles like Nioh and Immortal Unchained, so perhaps my concerns about a difficulty curve will be for nought. Code Vein releases later this year and I’ll be keeping a closer eye on it following this preview.