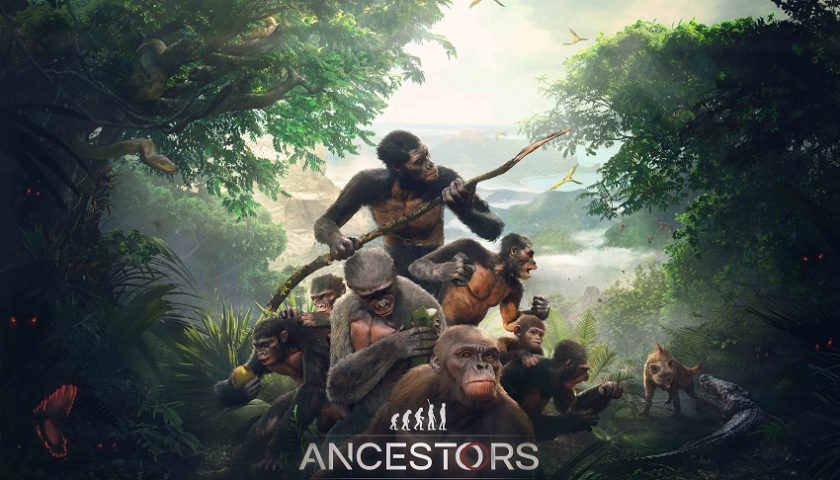 15 Hours into an Odyssey

The brutal horrors of survival in the days of the Hominids are on full display in the first 15 minutes of Ancestors: The Humankind Odyssey. High in the treetops, as the creatures of the jungle from over ten million years in the past fight one another for a leg up in the gene pool, the camera watches a dead fish floating downstream before it’s picked up by a passing ape. With an infant clutching its back, the ape climbs the nearest tree to nearly the top before it looks to the fish to enjoy its newly captured meal. But out of nowhere, a large bird of prey grabs the ape and its youth, flying them high over the jungle canopy before dropping them into its nearby nest. The ape struggles to break free from its claws, while the infant makes a break for it. As the beastly bird brings its sharp beak down on the skull of the elder ape, the infant falls to the jungle floor. It is now alone.

You take control of the infant from this point, though I won’t spoil the moment any further, as its truly one of the more compelling but traumatic opening sequences to a game from recent memory. However while this dread and confusion filled moment is fascinating on its own, whether the premise of taking a clan of hominids through the ten million year evolutionary cycle holds up over the entire course of the game is hard to say. Ancestors is a third-person, open-world survival game, so you could easily spend over a hundred hours in its dangerous wilderness learning how to complete the most basic tasks. But after 15 hours of learning to sharpen sticks with rocks, building sleeping beds from ground palms and figuring out how to stop the bleeding after a black panther attack, the slow carve of progress through the murky waters of evolution has nearly worn me down, and the attraction of discovery begins to elude me.

Like the Hominids themselves, Ancestors is a curious beast. It tells you nothing in advance beyond some basic instructional text that may as well be written in ancient Egyptian, as without context the words just bounce off your brain like a coconut off a rock. The whole idea is to take your clan of apes through the path of evolution, discovering the basic building blocks that began to set them apart from other species. The first discoveries are the most basic, things like identifying plants that can be eaten, or items that can be used as tools of some kind, and then branch out in complexity from there. You’ll also discover new territories, encounter new species and try to survive by managing your sleep as well as your food and water, but what little wonder there is for the curious is quickly snuffed out by the menial challenge that permeates the entire open-world survival genre; trial and error.

Without a tutorial, any discovery you make feels like a happy accident of sorts, which in many ways is the truest form of learning. But the process of learning alongside surviving makes for some real moments of frustration, or worse, outright boredom. Identifying something is a matter of hitting the intelligence button, looking around for an icon, then holding and releasing Y. While it initially feels clever and conveys that sense of discovery that can make open-world games compelling, it very quickly falls into ‘checking a box’ territory. Although when you do have the odd flash of brilliance and discover that altering a stick with a rock can make it sharper, you feel embarrassingly smart, if only a brief moment before being suddenly attacked and eaten by a cobra.

In order for your clan to learn and move forward as a species, you need to make sure your travelling is done while piggybacking an infant or two. Any new discoveries, along with simply identifying things in your surroundings, will allow you to grow out the neurons in your ape’s brain like a skill tree, unlocking new skills as you progress. Then as your current generation gets older, mates and has more infants, you can skip forward to the next generation, retaining many of the skills you learned prior and moving the clock ahead some years provided you were able to lock them into place. The children grow up, the adults become elders and the elders pass on to the great big jungle in the sky.

You can control any member of your clan and eventually call on clan mates out to join you in your journey which can have numerous benefits like helping you intimidate dangerous animals, but also comes with unreliable AI that doesn’t always respond to your calls with the urgency it needs to. When they get cornered by a beast, they’ll often do nought about it, giving themselves up like large fish in a small barrel. You can beckon them to your side but more often than not this doesn’t do anything, resulting in them becoming something else’s lunch and you having to reload your last save.

Happily, getting around in the trees feels pretty satisfying. It’s both simple and starts to feel pretty good once you find the rhythm to it, just tap A and point in the direction you want to leap and the ape will do the rest, automatically grabbing any branches or tree trunks it comes into contact with. You can swing off the greenery too by holding A, helping you make even longer leaps. It can get a little lazy when trying to move backwards or back down towards the ground, but in most cases, traversal feels very natural. Sadly any wonder that comes from interacting with the environment, be it through using your available senses like hearing and smell, or through visual discovery, starts to feel easily reduced to some quick button presses. You go through the same motions so many times, which admittedly falls in line with the narrative of apes learning to become humans through repetitive learning, but the joy of those interactions wears down quickly.

One of the more interesting mechanics is fear of the unknown, which triggers when your ape wanders too far from home. The screen becomes hazy and fills with horrific flashes of dangerous animals attacking you, but this is all just in the ape’s head and can be overcome by calmly going about your business; identifying things in the area you can recognise and then following the rays of light. If you’ve recognised enough of your surroundings and safely make it to the light’s origin point, you can conquer your fears and increase the area within which your clan can wander, fading away from the haze and opening up the region to more exploration.

But that’s about where the mechanical joy ends with most other aspects feeling like they’re lacking in some manner. The lack of a tutorial is the real killer, here. Without any meaningful direction for the player at the outset, Ancestors’ opening hours feel confusing and lackadaisical. Interactions with beasts feel like total chance encounters and the game’s AI feels almost completely inept at taking care of itself. But mechanical issues aside, the game’s premise is fascinating, largely succeeding in recreating that feeling of discovery through trial and error. And there were times when I felt a quiet peace when happily soaring from branch to branch through the canopy with my clan. But the satisfaction of learning new things doesn’t overcome the grinding nature of these games and it quickly loses its charm.