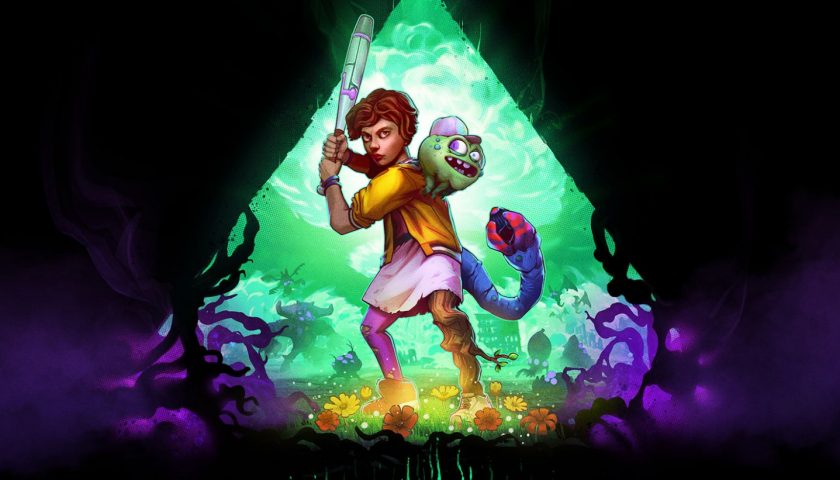 RAD – A Not So Radical End of the World

I have been writing and re-writing my review of Double Fine’s RAD for days. The act of reviewing it is proving as much of a challenge as the game itself, as a lot of the game’s features and whether they are enjoyable will vary from person to person. Do you want a game to hold your hand, offering tutorials and major narrative events at various intervals, or do you prefer to jump right in, picking up gameplay and trace amounts of lore as you go? Despite having played multiple hours of RAD, I don’t think it will be a game that holds up with time, nor is it what I would consider a “must-have” despite it being well executed. Here’s why.

RAD opens with narrated graphic novel-style cutscenes, explaining how two Armageddons absolutely decimated the world twice over. All that is left is one city of human survivors and an irradiated wasteland. Players are cast as one of the last city’s teenage inhabitants, who is exposed to radiation by the village elder. Stepping foot into the wasteland would normally mean certain death, but now the teen is able to mutate and learn new abilities. It is now up to the youth to secure humanity’s future.

You’ve no doubt encountered games set in a radioactive wasteland before, whether it’s Bethesda’s Fallout, inXile Entertainment’s Wasteland 2, id Software’s Rage or indeed one of the other many games obsessing over the end of the world. I believe it’s for this reason that RAD simply glosses over the apocalypse and opts to simply throw the player into the game so they can get immediately into the action.

Now that doesn’t mean that there is no story in RAD. From time to time, the game has narration. Whenever the player encounters something previously undiscovered, such as a subterranean dungeon, an artefact from the past, or a survivor in a hideout, players will learn a little more about RAD’s world. I still feel the game would have benefited from a proper, err, more present narrative than narration and opening cutscenes. Double Fine are talented developers and I’m sure they could have provided something a little more unique and memorable, though this might have detracted from the game’s replayability.

Gameplay is accessible enough – if you’ve played one twin-stick action game then you will be able to pick up and play RAD immediately. Movement is on the left analogue stick, aiming is on the right. The A button jumps, the X button strikes, Y interacts with various objects, and B uses items. The shoulder buttons are used to control various mutations the player earns as they level up on various runs.

As with other action games of recent years, RAD features the RPG mechanic of gaining experience and skill levels. Instead of allocating skill points or unlocking a skill tree, however, players earn a random mutation. The random factor keeps players on their toes, as players will have to determine their best strategies on the fly – especially when combined with other randomly-determined mutations. I enjoy it for the most part.

What surprises me the most about Rad is how challenging it is. A number of factors combine to offer a refreshingly simple-yet-difficult experience. Depending on your mutations, starter enemies will either provide a moderate challenge or thoroughly kick your ass. On one run, I had the ability to lay eggs that hatched half-spider clone-babies that attacked my enemies. They seemed like a game-changer at first, though they were decidedly weak against foes. I did not beat the first area on that run. Later, on my second run, I had a large, ugly face grow out of my back, which spits fire at enemies and can be detached. This allowed me to get a few hits in on some baddies while I retreated to heal. When I unlocked the ability to leak poison from my legs, these combined to open up a strategy I would come to call “the deadly wussy”, where I ran circles around my enemies, keeping my distance but managing to defeat a ton of them.

At the end of each level, there is an alpha mutant or boss. These are usually larger, more menacing versions of previously-encountered enemies. Like a lot of the game, rush into these situations without thinking and you won’t last long. Take your time, develop a strategy and you might just live to return to town, buy an item or two, and take on the next area. Rinse and repeat.

When I say “rinse and repeat” the emphasis should be on repeat. RAD feels “samey” almost immediately. The levels are largely a scenery and baddie smashing experience. You’ll run around clobbering the scenery hoping to find hidden currency or something interesting and be sorely disappointed for the most part. A lot of things can be smashed, but surprises are few. There are also very few types of enemies present, meaning you will encounter them over and over (and over, and over). At this point, the game starts to feel like an impersonation of a rogue-like RPG, as the genre hallmarks are there: mini-map, isometric viewpoint, experience levels, but the game is so light on depth. It doesn’t irritate, it just disappoints.

After some time with RAD,  I don’t feel it pulling me back to it. I don’t feel a need to save humanity, or even to complete the game for completion’s sake. Other games have pulled off this highly-randomized experience quite well (Enter the Gungeon does these almost flawlessly) but RAD doesn’t have enough variety or reward to offer an incentive to invest time in it. That sucks considering how well it’s all put together. There are no bugs, nothing seems out of place, and the soundtrack is absolutely stellar. Somehow, RAD did not mutate into the sum of its parts.