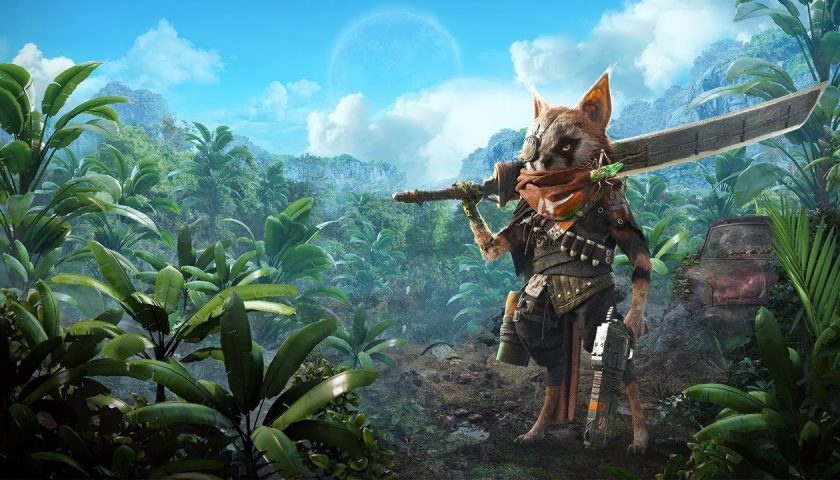 Biomutant is a game that has been floating around for quite a while, popping up at trade shows around the world for a couple of years now. But until now, no one in Australia has had a chance to play it on home soil. Thanks to PAX Australia the game was on show for all to see and I went hands-on with this upcoming original IP from THQ Nordic to see exactly what it is all about.

The demo started with me customising my very own….thing. Something of a cross between an Ewok and a Mowgli (pre-midnight snack of course), my Biomutant could be customised in a variety of ways. Fur colour, personality, sex, skill set and more. It was actually quite the impressive little character creator and allowed me to tailor my beastie to my heart’s content.

Once completed I was thrust into a mission with little in the way of instruction. The world feels very much like the world of Enslaved, that kind of post-apocalypse where nature has taken over once again and only crumbling remnants under mounds of foliage remain to remind you of what once was. The game has a clear climate change/environmental message and it doesn’t shy away from telling us how we are screwing up the planet. Oil destroying the landscape, toxic water and low oxygen are just some of the hazards that are a result of how humans treated the planet. I am not guessing here, the game comes out right and tells you.

Gameplay wise, the title feels like a fairly standard action/adventure. There is a mix of melee combat (with light, heavy and charged attacks) and ranged weaponry. Mixing up the action against a range of opponents is a must and quite an entertaining way to dispatch nasties. It is early on so the skillset was a little bare, but there is certainly the promise of RPG elements to improve the player’s arsenal of attacks and add to their collection of death-dealing weaponry. The biggest problem I had with the combat was the camera, which often got stuck in walls or wigged out completely, this, however, is likely to be a result of the very early (pre-alpha) build that I was playing and it would be a pretty safe bet to say it won’t be in the final release.

Biomutant is going for a wonderfully whimsical mood with its narration and approach to character creation. The main character is the perfect mix of cute and menacing while the baddies all feel like they have come from a slightly dark, yet family-friendly cartoon. There is a narrator guiding the story who adds quite a lot of personality to proceedings, filling in the silence with storybook-like yarns and comforting humorous quips. This is a game with a healthy dose of individuality and is really looking to stand out from the increasingly saturated action genre.

While the demo was far from feature complete and chock full of graphical bugs and glitches, I have hope that Biomutant will be a wonderful experience upon release. I can’t say for sure from this small slice, but I want it to be so. There are just so many similar titles in this day and age that I find myself really rooting for any game that dares to be different and Biomutant does exactly that. We don’t have a release date yet and even though it is still listed as a 2019 title, don’t expect this one before April next year.