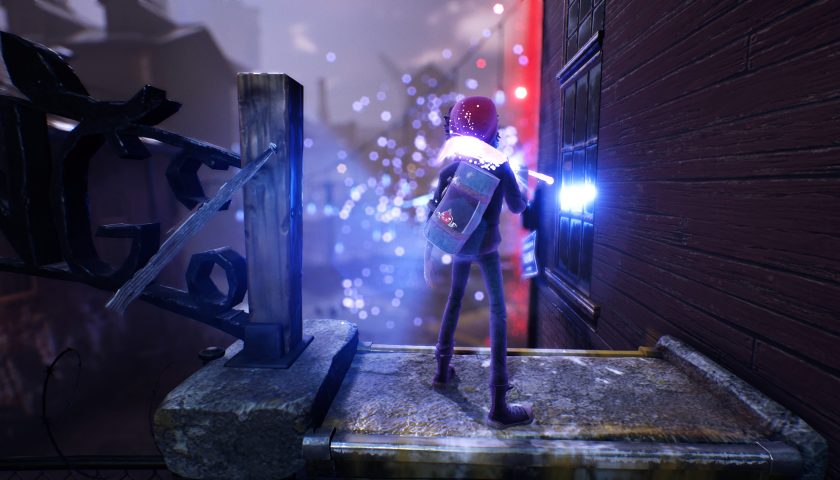 “I guess there’s a reason why they’re so mean. Doesn’t make it okay, though.”

Concrete Genie has some things to say, and while you could hardly accuse it of being subtle, you could likely accuse anyone expecting subtlety from it as being perhaps just a little naive. This is a game that first burst into the retinas of the public through a series of high contrast, neon-soaked images the sort of which we perhaps briefly thought that would define this console cycle after Infamous: Second Sun released in 2014. It looked wildly creative, as well as thoroughly, shamelessly messy.

Let it be known that Concrete Genie is absolutely beautiful in a very direct and striking way. It’s also the kind of beautiful that makes the lack of HDR support (at least for now) the kind of thing that could make a person wince in pain. It knows what its strengths are, and it leans into them. Sure, dust may not be kicked up beneath your feet – and sometimes your feet may not even be properly touching he ground at all –, but the energy that goes into the light-spectacle makes up for it and then some.

A spectacle, yes, but one that you’ll have to create yourself. Concrete Genie opens on its player character, Ash, sitting innocently with sketchbook in hand and brush out. Cue a reminder that the PS4 controllers still support motion control in the form of a painting tutorial. It’s a visually odd moment – watery paint seems to stretch across the page rather than spread. There’s a reason for this, and it becomes apparent soon after a gang of bullies scatters Ash’s sketchbook to the wind and locks him in a tram car headed for a lighthouse.

This serves as both narrative impetus and basic tutorial. See, the setting of this game is a small, abandoned fishing town called Denska. Both Ash and his attackers are former residents. It’s a ghost town now, swallowed by a black goop initially described as an oil spill but perhaps actually being the sort of thing that would belong in a Ghostbusters film. In order to truly get started, Ash is going to need to free his ride from said blackness before he can get back to town proper and restore it to life.

It would be a waste of breath to try and summarise everything else. Concrete Genie somehow managed to balance a whole host of different balls while at the same time seeming somewhat straightforward. It’s difficult to say why, but it’s not quite a case of too many chefs as the resulting soup is still pretty good, but rather a recipe where every ingredient works well enough, but none get to quite shine to their fullest potential. Others eventually get lost entirely.

Needless to say, after learning the mechanical ropes and noticing that his sketchbook pages are all flapping around town, Ash, with the help of his first and primary genie – an adorable monster made from lines of light that live on the walls of buildings -, is able to escape from the lighthouse and set about trying to restore his former hometown with the aid of a magical paintbrush.

The titular genies of the title are monsters of Ash’s invention, brought to life through a paintbrush that spews living light again lifeless, man-made surfaces. They come in elemental varieties that can assist in overcoming certain obstructions, but long term really just function like cool looking, lovable keys. If there’s a notable blockage to your physical progress, then you can bet a few hairs of that magic brush that there’ll be a corresponding genie somewhere nearby just waiting to be painted to life so that it can burn, zap or blow a puzzle piece into place.

You’ll need to paint new ones because genies literally live in the walls – they can’t reach anywhere that isn’t connected by another vertical surface. It’s an absolutely fantastic idea that is a wonder to see spring to life, light leaping from Ash’s giant brush in order to… grow new creations from pre-set templates on the selected surface. Seeing your art smoothly animate against any given wall is a fantastic feeling that sadly fades as greater mastery of the mechanics shines an increasingly bright light on just how restrictive your creative powers really are; perhaps free painting might be a bit too much, but as it stands what players are left with is a series of scalable stencils. Concrete Genie is the most stunningly beautiful cake-decorating simulation ever unleashed on the public.

Don’t read that last sentence as too much of an insult. It is truly gobsmacking.

Fortunately, falling short on overflowing potential hardly results in a bad game. Concrete Genie is good – very good, even. Ash feels fantastic to control: his movements are delightfully snappy and the character animation is right in step with this, be he simply running around town or climbing with an easy swiftness that would give Nathan Drake an aneurism.

In fact, remove what it has to say and the beautifully-but-limited graffiti mechanic and, as a modest-scope action-adventure game, Concrete Genie almost always feels spot on. Excellent character control leads to things like chasing and catching extra sketchbook pages (which, as you’d guess, expand your painting options) being about as justified and as good as collect-a-thon elements can be, and baiting the bullies to look one way while you make a dash in another is wisely kept simple, and loses little satisfaction in the process. Platforming segments slot in seamlessly, and the core narrative gives fair reason for the lack of swimming mechanics.

Heck, Concrete Genie even manages to last a good while without resorting to combat mechanics, and overall is a very playable and pretty well-paced action-adventure game that happens to have a cool creative side element that means that it frequently looks excellent while it goes through some more familiar gameplay beats and lightly explores themes like bullying, economic and environmental costs, troubled childhoods, and – and boy, it’s here where it really had potential – art as therapy.

And that’s kind of the problem. The stuff that is innovative and novel and the most fun about Concrete Genie – the stuff that it was smartly marketed on – gradually feels like eyewash, a vehicle to prop up a highly-competent-if-standard-stuff game, rather than the other way around. In this sense, it’s kind of a mess of different ideas, both mechanically and from the perspective of narrative, that, much like the ‘light graffiti’ that belches forth from Ash’s brush to dance on the walls of abandoned buildings, is somehow kind of beautiful regardless. Certainly, if the game is disappointing at all, then it’s not because of what it is – and to be clear, it is certainly worth buying – but because of the sense, with a little more focus, or perhaps experience (or, dare I suggest it, more resources), Concrete Genie might be able to graduate from a very good game that you’ll eventually forget to an experience with the potential to stay with you forever.

But, hell, I’d sure by the shit of some Christmas-themed DLC were it to materialise in a month or two…