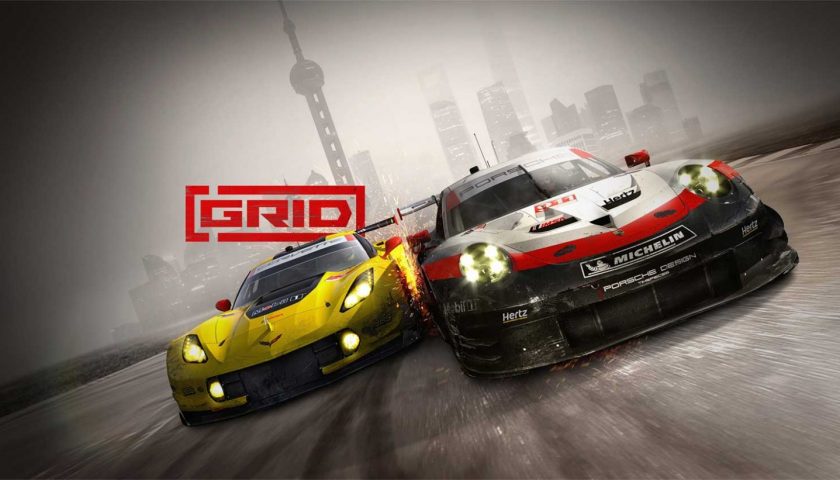 GRID – Stuck in the Middle of the Pack

GRID is the latest game in the series that started out as ToCA Touring Cars back in the late ’90s before slowly transforming into the intensely enjoyable arcade racing titles of recent years. It’s a series that grew on the pedigree of Codemasters past hits, branching out into new areas like adding a narrative & characters to the career mode or pushing the technology of the time into new and tangibly exciting places like their iterative damage modelling and large fields of AI racers to race against. Based on those alone, you’d be forgiven for wanting it to be Codemasters next arcade masterpiece. But 2019’s GRID falls well short of these expectations, coming off the line with the raspy whimper of a 2002 Hyundai Excel instead of the roaring growl of a V8 Mustang.

GRID’s ideas and presentation are pretty played out at this point. It feels like a mashing together of GRID 1 and 2’s greatest hits, both games from a previous generation, with a few new bits thrown in to sweeten the deal. But while it leans hard into the tried and tested turns of its past without relying on any exciting new bells and whistles, GRID still offers enjoyable on-track action. But we’re living in a world where Forza Horizon, GT Sport, Onrush, and even The Crew exists, and I don’t see Codemasters latest effort being enough to hold players attention for any more than a few hours at best.

GRID’s main game mode is its career, which allows you to create a driver and a team to race under and try to become the champion of the Grid World Series, the top-tier championship of racing. You’ll be given a teammate, usually a novice who can sometimes be more trouble trying to deal with than they’re worth and be given a choice of five career paths to go down. Each career path focuses on a different racing style, from touring cars and street racers all the way through to open-wheelers in a series weirdly named after two-time F1 world champ Fernando Alonso, whose inclusion feels like a slapped-on afterthought at best.

As you complete cups and progress to higher tier championships, you’ll earn credits that can be used to purchase new team cars – a requirement in order to be able to race the series you’re lining up next. You can also put credits towards hiring new better teammates who might be more skilled in certain disciplines or might have better tendencies towards attacking or defending. This helps your team championship hopes, which in turn helps you earn even more credits, although the more skilled the teammate, the higher the percentage of earnings they might ask for. But all of this is in service of making more money for your team, opening up more championships for you to compete in. Teammates can be ordered to push harder or defend, which in itself is a strange thing for a driver to ask explicitly of a team mate, and they often simply tell you they can’t do it in the first place, denying your request and getting on with the job. The team aspects of GRID just don’t land the same way they did back in 2008 when this kind of thing was ground-breaking. I never felt attached to my team or team-mate, and it never really mattered if my team won a series or not.

Before the start of each race, you’ll hear a couple of YouTube-esque commentators do their best to describe what the crowd can expect from the upcoming race, as well as a word or two from your race engineer. But all of these people sound completely bored or like they’re reading lines verbatim. The race engineer is particularly egregious at this, often giving me the impression that he’s only here doing this as a favour, and he’s regretting saying “yes, I’ll engineer for you” the entire time.

Thankfully, the on-track action is a lot better than the rough race build-up would have you believe. Races are mostly short, frantic affairs that often devolve into ram-fests, as any good arcade racer does. Codemasters makes a point of boasting about its 400+ AI’s programmed into GRID, which amounts to a database of driver avatars whom you might rub paint with at some point. If you have one too many run-ins with an AI, they’ll become your nemesis, theoretically racing you even harder than before, possibly even trying to run you off the road in response to your aggressive overtakes. But, just like all the supposed small differences in AI avatars, the nemesis system fails to tangibly make an impact on the racing outside of giving you someone to avoid wherever possible.

Cars feel pointy and reactive to light inputs–they feel a lot like heavy go-karts that require you to brake earlier than expected–which makes for some fun slides and drifts as you navigate any one of the games 13 tracks. There’s some good variation between fictitious street circuits and real-life race tracks, but despite there being 80-plus layouts to choose from all up, it doesn’t take long for the limited circuit choice to start feeling old.

That’s really my biggest issue with GRID, I feel like I’ve been here and done this before. Despite the moment-to-moment racing and driving still being fun, I don’t feel like I’m achieving anything after each race. There’s very little connection between me and my team beyond the shallows of altering your car colours and hiring or firing team-mates, who are completely disposable. In avoiding taking any risks with new ideas, GRID perhaps takes the biggest risk of all by resting on its laurels and sticking to what it knows, and it doesn’t pay off.