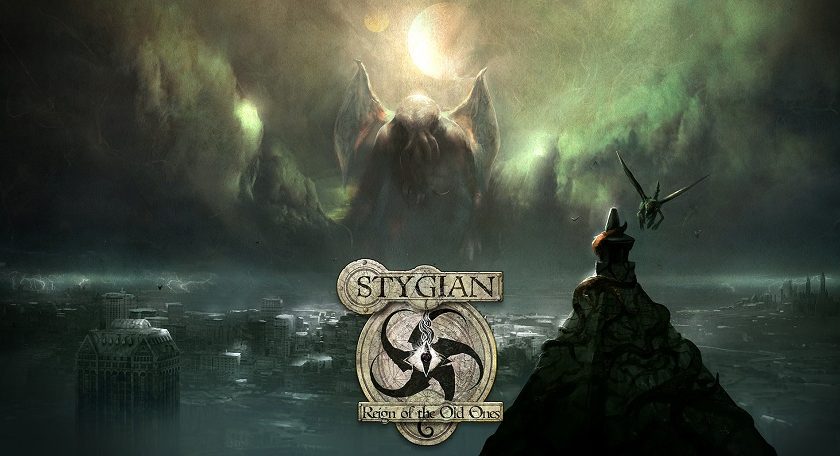 Stygian: Reign of the Old Ones – RPGing with Cthulhu

I’m a fan of horror, particularly Lovecraftian horror that builds an atmosphere of unease and dread, and lately, I’ve preferred turn-based games that give me time to consider my choices. Stygian: Reign of the Old Ones is a new game from Cultic Games that fits this bill, so I was keen to dive in and experience what it has to offer.

The game has an interesting premise. You play a character living in the small town of Arkham, in the swinging twenties. The town is then flung into another dimension, where the sky looks strange, the sun never shines and nightmarish creatures prey on the living. The game picks up one year after this disaster as an event prompts you to find a way to escape the bleak city.

The first order of business is to pick your protagonist from a diverse choice of 16 different men and women or build your character from the ground up. You get pick your gender and age (young, adult or old), and then get to choose from the most interesting classes or archetypes I’ve seen presented in an RPG for some time.  The eight possible archetypes allow you to be an aristocrat, occultist, performer or solder, among others. You can then further refine your experience by selecting from four backgrounds. For example, your investigator can be an occult detective or ex-cop or your performer could be an actor or juggler, among other selections. Each of these options has some impact on your stats and the way other characters may interact with you. All the choices seem relevant to the setting and align well with different play styles. But wait! There’s more. You then need to choose your character’s belief system. I fancied a materialistic thief, but how about a bankrupt, nihilistic aristocrat, or a career marine with an unfailing belief in the divine? Those allow for some meaty roleplaying. Finally, it’s just left to choose a character portrait and assign some attribute and skill points before the adventure starts.

From the outset, the atmosphere in Stygian is suitably gloomy and unnerving. The ambient sound and music support the creepiness and the hand-drawn art style really works with the 20’s setting. A lot of effort has gone into small details that sell the idea that this town has been ripped from reality and flung into … a very strange place. Buildings are dilapidated and infested with strange growths. Mist seeps along the cobblestone streets and tentacles can be seen moving unsettlingly through the river by the town. Before the end of the adventure, you’ll get to visit several creepy locations and experience some cool Lovecraftian style events and creatures.

Stygian plays like an adventure with some investigation, survival horror, inventory management and turn-based combat to mix things up. Your journal tracks key events along with notes and objectives. Your character selection will have a bearing on the way you approach challenges. Stealth is a viable option compared to straight out combat and talking with everyone you meet is important to understanding your environment and progressing the story. Conversations use a system reminiscent of the classic RPGs such as Planescape: Torment. Your conversation choices may progress the plot and affect your relationship with NPCs and if you pick responses that align well with your belief system you can even regain sanity (more on that later).

Along your journey, you may get the opportunity to convince one or more NPCs to join you as companions. If you’ve chosen a non-combat character, such as a thief, then recruiting a sturdy, tough companion is probably a good idea. I only met a few of the companions during my playthrough but found them to be unusual and compelling which is part of the overall charm of Stygian. I wouldn’t have considered a deformed freak as a top pick for a travelling partner but ended up with one as my sidekick, so… there you go. He also had an interest in the occult allowing him to cast some interesting and somewhat revolting spells (acid spit, anyone?) in combat. You have two companion slots in the UI, but sometimes other characters will join you so you can end up with more than three people in your party. While you get to pick skills for companions when they level up, you can’t change their clothing or weapons but can equip health items, so that seemed a little inconsistent. This may be a restriction of the two companions I discovered, so perhaps others allow more customisation.

The world is filled with all manner of junk and useful items that you can collect on your travels. Some of these items are related to quests, others can be used as weapons, crafted into useful equipment or sold to the various vendors you encounter. Cigarettes, or cigs, have become the local currency and you’ll need to consider how best to spend them. There is also a crafting system, which I got limited use out of, as I had put most of my character’s skill points into other areas. Still, I was able to create ammunition, health items and a few useful weapon modifications. The game is set during the prohibition era so, of course, you’ll also find a large variety of alcohol, drugs and tonics in which your character can indulge for various benefits and associated detrimental side effects. These chemicals are an important tool for dealing with one of Stygian’s major mechanics… sanity.

The struggle to maintain sanity is a major theme in Lovecraft’s work and keeping your character relatively sane will be a challenge in Stygian. Many sights, events and enemies in Stygian will test your character’s resolve resulting in loss of sanity. If it all becomes too much, and your character’s sanity is completely depleted, you will get a game over if. I found this aspect of the game quite demanding and saw the “You have gone insane” screen more than a few times. It can be especially frustrating in some areas where your character suffers sanity loss over time and you suddenly get a random encounter, which inflicts sanity loss at the start and you insta-die.

Combat is treated as a serious, stressful affair in Stygian. Thankfully, you can avoid a lot of it which is great if you’re playing a non-combat character, such as a thief. Some fights are unavoidable though, so you’ll end up fighting for your life at some point. Combat is turned based and fought on a hex grid. You can move your characters and attack with their equipped weapon. You can also use items or skills via a radial menu, loot enemies or even use special actions for certain battles. The combat is not too bad, but it felt a little slow and clunky. It could take a turn or two to move in range of an enemy, and then just bash (or shoot) them turn after turn until they die. I also struggled to select the correct foe or tile when surrounded by enemies, or when there were too many bodies on the ground.

I started my review on a pre-release version of Stygian and did run into several issues. I didn’t experience any crashes, but sometimes the UI would become unresponsive during combat, forcing me to reload. There are other very minor things such as characters moving a little awkwardly or running backwards. Apart from that Stygian uses an autosave feature, which I’m not a fan, particularly in RPGs or games in which I want to experiment and explore. The good news is that the developers still appear to be actively working on the game, delivering bug fixes and quality of life improvement like … a save anytime feature! The game had me raging a few times when I encountered a freeze bug near the end of a difficult battle… but I kept coming back to eventually finish my playthrough.

Stygian mixes some very cool ideas with its setting, though I feel that elements such as the UI awkwardness, and slow combat detract from the overall experience. I also found that the endgame moved quickly and then wrapped up far sooner than I was expecting. If the few detracting features don’t scare you, then I think this game is worth experiencing and is sure to get better and the developers refine it. The ending also leaves the game open for a sequel or extended edition.