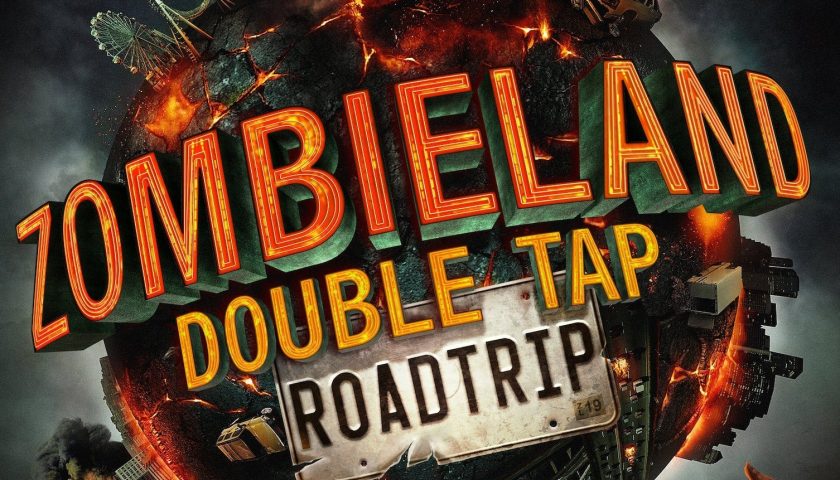 One thing that doesn’t occupy my mind much, if at all, is the question, “What makes a good twin-stick shooter?”. Unfortunately, it’s one that surfaces every few moments while playing Zombieland Long Name That Doesn’t Matter. Good shooting is at the top of the list, obviously, although this might be the easiest to master. As long as bullets fire in the direction the right stick is pointing, while your character moves according to the left stick, then you’re 80% there. I can’t say that Zombieland’s shooting fails this simple test. However, there are several design decisions, as well as certain considerations not taken for the Switch’s small screen, that combine to make Zombieland a distinctly bland and ultimately forgettable experience.

There is decent variety in the weapons on offer, but none of them are permanent. Instead, you must search the boots of cars, rubbish bins and other repositories for shotguns, grenades, automatic weapons, baseball bats, guitars (no, not the Maton), katana swords and others. God knows why every citizen was carrying such an Arsenal in their car, but it sure is handy for you seeing as the world has become zombiefied and they’re all coming for you in a straight line. To start with, the reaction time of actually pressing the right trigger to open these weapon closets feels very hit and miss, which can result in you not actually getting the weapon as you try to move quickly past it while being pursued by undead hordes. This is partly because you need to press it once to open and then once more to actually take the weapon into your possession, either replacing your shitty permanent handgun or swapping an existing (often depleted) weapon.  It just doesn’t feel responsive enough. This lack of precision bleeds through all aspects of the game, including hit detection that feels almost dice-roll like in whether or not a direct bullet line will actually result in a zombie being clipped.

Okay then, a tick for weapon variety. Shotguns do decent spread damage and swords carve through zombies nicely enough. The problem is the shooting just doesn’t feel very fun. There’s little satisfaction in the actual act of undead murder, possibly because each weapon has limited ammunition or uses before you are forced back to a handgun with about three bullets per clip and a firing rate slower than co-operative applause at a one-armed villain convention.

A third necessity for longevity in this genre is enemy behaviour and variety. The aim is to build the player’s skill up to the point where they can deal with large waves or numbers, courting almost certain failure before finally getting through. Zombieland’s pacing never feels considered, with dribs and drabs shifting to streaming numbers and then eventually, around the third level, so many effing zombies that you’ll die and be forced all the way back to the start of a bloody escort mission! So yeah, it doesn’t get any points for the crap checkpoints and the crap escort mission.

Graphically, it looks quite sharp, though there’s no attempt at any kind of original art style. You could look at a screenshot of this game and have no ability whatsoever to identify it as such – unless of course it had a watercolour mark saying the game name or something. Explosions explode, blood bleeds and all that. All the parts are there. It’s a zombie twin-stick shooter. Yeah.

What else? You earn upgrade points after each level, which you can pump into things like weapon damage, health and so on. I put all of my points into gun damage, maxing it out and then felt absolutely no discernible gameplay difference once the next level loaded. This is marketed as a co-op shooter, but I don’t have a Nintendo Online sub and quite frankly I would be surprised if a) anyone in the world would be online at the same time as someone looking to co-op and b) that any of your friends would part with actual money to play this for five minutes before never wanting to do so again.

Honestly, the whole thing feels like a free to play mobile game. There are actors doing reasonable impersonations of famous actors from the film (yes I know who they are but can’t be bothered to Google the spelling of their names). You know, the guy from the Facebook movie and Woodley Harrison. Well, they aren’t in this, but one of the girls apparently provides her real voice. Not sure which one.

The writing is awful, full of inane character banter and literal shit jokes (the second level tasks you with finding a decent toilet to use). Things also look incredibly small on the Switch screen, making aiming at zombies with a pixel-wide aiming laser something of a frustration. On a big screen, things look okay, but the game really needed to include a few Switch-friendly options to make playing it in handheld mode bearable. It’s not even that the game is particularly broken – there aren’t any bugs that I could tell – it’s just that there are so many better games out there in this genre and/or at this price point that causes Zombieland to sink so thoroughly.