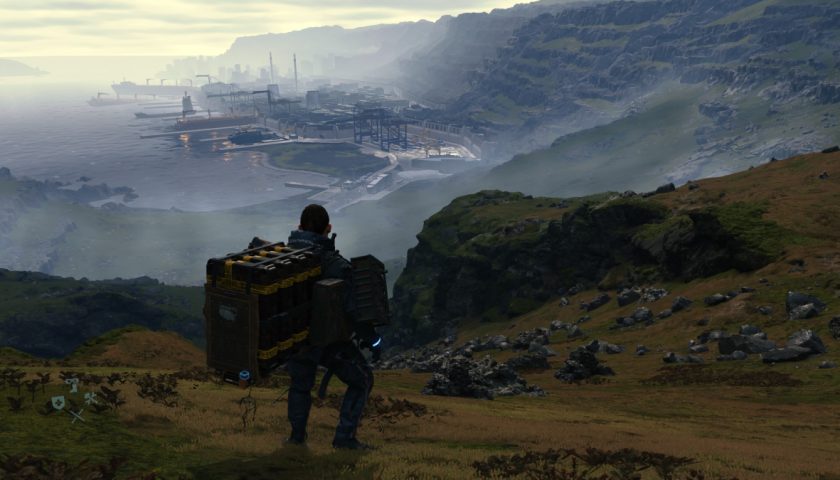 *This article contains spoilers regarding the ways that players connect in Death Stranding. No story spoilers are revealed. If you would rather discover these things yourself, please be warned*

We will assume you’ve read and watched the Death Stranding reviews. Let’s skip all the housekeeping filler and get to the experience of playing this game in the first week of launch. Early reviewers were limited in what they could talk about, bound to reveal only footage from the first few chapters, and while I’ve been assured by some who were part of that group that the stranding aspects of the game were present, I have found very few places talking about the amazing online component. Perhaps they didn’t want to spoil things for players or perhaps the algorithms for review populations didn’t quite work. Whatever the case, I am blown away by the subtle yet integral way in which players are influencing each others’ Death Stranding experience. Bear in mind that I have only just reached the third chapter, so there is more (I hope) to discover, and if it keeps being as incredible as these opening hours have been, then I will definitely work on a second article.

Everything in Death Stranding is so unknown, so mysterious and experimental. My first taste of others influencing my game was the existence in my world of players’ ladders and climbing ropes. Get close enough to these and you can press the DualShock 3’s touchpad to give that player a ‘like’. As you also leave ladders and ropes behind, you’ll receive notification of other players liking your contribution to their world.

In one instance, the placement of a player-ladder helped me cross a river with cargo that carried the stipulation that it not get submerged in water. This saved me a lot of grief as I had run out of ladders myself. I don’t know how Death Stranding’s programming decides what comes into your game, but in this case, it felt like a benevolent being was looking out for me, opening dimensional pockets to help me out.

Red Dead Redemption was a game all about time. Time moved slowly, and it took time to do just about anything, even the simple act of checking a corpse for loot. It was also an incredibly exciting title for the way that the towns evolved as you played, with new buildings going up and towns seeming to get busier and fuller the more you played. Death Stranding features moments that are just as exciting and incredible. They are subtle though. On day two of play, I emerged from a Bridges bunker, it’s ship-like structure looming overhead, to find my world littered with signs. You can put down a sign wherever you like, and choose from a list of thirty or so. These emote-like signs are ways of communicating. You might put a “don’t give up” sign down after a particularly gruelling moment, or place BT warnings (not that players can do very much to avoid BTs out in the field).

These signs make you feel connected to other players by virtue of shared progress. It doesn’t matter that you aren’t the first to reach a city. Everyone is working toward the same goal. It costs so little to offer them all a like as you pass by, although the game does lock you out from liking the same type of thing too much. And so these shared safe areas become spaces for elation and positivity, darting from sign to sign and liking them, in the hope that others will do the same for your own scattered markers.

Then there are trails. My God, this game! Where previously there was only the time-ravaged landscape, turned ancient beneath the constant attack of time-fall, now there are trails. These meandering dirt tracks started to appear for me soon after my third major trek. They represent the paths most taken by other players. You can also contribute to trails – I’ve received likes from people following routes that I’ve taken. As you follow these trails, the names of those who contributed to its creation appear and of course you can offer a like.

It’s difficult to explain how exciting it is to see your world-changing in such subtle and unexpected ways and it truly needs to be experienced in the context of Death Stranding’s travel-heavy loop. In a world so bleakly isolated, such connections – or strands – feel like lifelines to humanity. And because the entire ‘like’ system is so positively one-sided, the entire community is both passively and actively contributing to the hope and excitement of all players. It is just lovely.

In the Footsteps of Others

One story should help illustrate how cool it all is. One thing in Death Stranding is that your own glowing footsteps remain on the ground that you cover. I guess this helps you track where you’ve been as well as count towards your distance rating when you eventually deliver a package. Either way, it’s another nice little thing.

Colour me surprised, then, when I saw trails of footsteps in my world leading up to places I had never actually been. These ghost steps led me on an amazing mini-journey for one mission, the objective of which was to sneak into a MULE camp to steal back something they had taken. MULES are the game’s human enemies. They are essentially bandits, obsessed with taking deliveries off of people like Sam. In fact, if you don’t have any deliveries on you, they will ignore you. As I approached the camp, there were several signs trying to help me out, such as ‘hide in grass’. Thanks, other players, I thought. However, it was the ghost footsteps that most intrigued me. I wanted to know why they were appearing to me. So I followed them.

They led me up and around the back of the camp, through a cave system, to a promontory overlooking the camp. Luckily, I had a climbing rope with me, so I embedded it, scaled down the cliff and snuck into the camp from the rear. A lone MULE sat watch over their storage container, but because if my assisted angle of entry I was able to sneak in and steal back the item without detection. While I was there, I also took as much other loot as I could carry from their stash. I then backtracked and delivered the package with an S ranking!

I don’t know if those footsteps were actually from another player or if they were deliberately coded to make my first MULE infiltration feel awesome, and in a way it doesn’t matter. It’s an amazing system in any case, as it blends together developer intent and player co-operation. I felt amazing afterwards, like me and that mysterious other person had worked together – all in a game where isolation is a defining element.

Keep On Keeping On

More structures are appearing for me the more I play, such as bridges, lost cargo and post boxes, the latter of which you can upgrade with emoting ghost characters or choose music/sayings to play when other players encounter what you’ve built.

I’m excited to see what else happens as I trek across this broken continent. Will trails get wider or erode through scenery? Will I see my first road and perhaps help add to it? Will I find another motorbike? What other connections or strands will I discover? The journey has just begun.

*A review code for Death Stranding was provided by Sony*