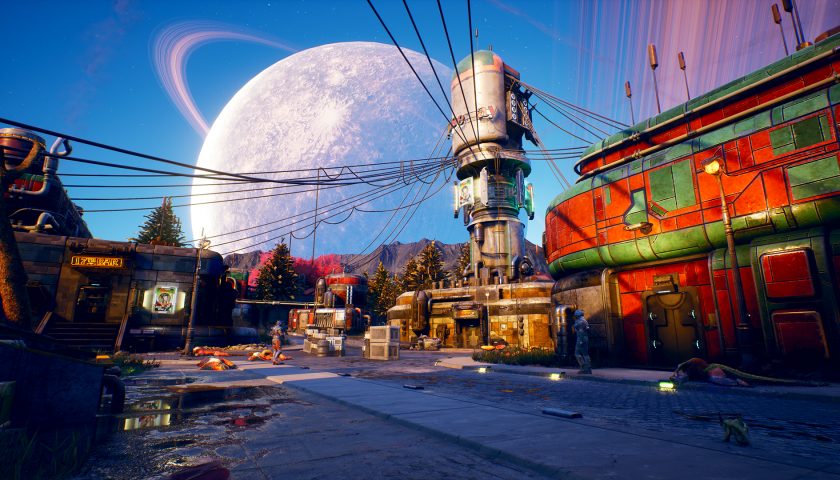 Journey to the Outer Worlds – It’s Better to Travel Together

Outer Worlds is a game that has that little bit of everything. Part FPS, part RPG, part narrative and every bit in between. How you play the game is always going to be a very different experience to how someone else might, and it’ for this reason that I usually steer a little clear for any titles that fall under this category. The sheer number of choices that need to be made can be daunting at times and often lead into areas that I’m less competent at, so the feeling that “I’m doing it wrong” seeps into many facets during my playthrough.

It was a revelation as such that I found that Outer Worlds is the kind of game that unintentionally is made better when playing with Anna. Like choosing a meal at a nice restaurant or deciding which movie you’ll see that night, either the decision is better made from the other person’s perspective or made easier when deciding for another person. Gone was the stress of choosing a name, building stats or picking the next mission, and just like building Ikea furniture with the love of your life, at the end of the process you feel like you both accomplished something amazing together. So, enjoy the words from Anna and myself as we explain why this game is the accidental co-op game of the year for us!

Anna – My ideal kind of game is a sprawling RPG. A wide-open world full of interesting lore, characters, quests and most importantly, absolutely no guns. Pretty much any game with gun combat is going to be a hard pass from me. Even when it is not the core mechanic of a game or if it lets me pick off all my adversaries I still struggle and it often takes me far too long and too many deaths to clear combat encounter leaving me frustrated and ready to quit.

To put it frankly I wouldn’t play Outer Worlds on my own. When I’m in charge of the controller we die, a lot, and I get annoyed. But by being able to pass the controller onto someone else instead of just rage quitting I can enjoy all the other things that make this game great.

Adam – Let’s not mince words here. I suck at RPG elements in a video game. I see the word Intelligence and I don’t link that with any benefit in the game even though it’s written in plain English right next to it. But even beyond that, being the lover of Chess that I am, I’m thinking forward and my mind will wonder if I’ll need that more than strength or dexterity, then going down a rabbit hole of what-ifs until I go “SCREW IT!” and put it in whatever. It’s a horrible process and my brain can be a horrible place at times.

But with Anna at my side, these problems go away. I see intelligence, she will go “oh that’s to have more dialogue options, we’ll definitely need that” then that’s it, the decision is made and I’ve been directed not only where to put my valuable point, but how I should be planning to play the game from that point out!

Anna – I love a character creation screen, probably too much. I could spend hours tweaking the size of my characters chin, selecting the exact shade of their hair, moving their eyes up and down their face and then pressing the wrong button and cancelling the whole thing. I’m not quite ready to admit that there is a problem with my way of doing things, but building a character together was a really fun and much faster experience.

Where do we go now?

Adam – The dreaded multi-mission / non-linear gameplay. It’s often spoken very highly about in reviewing because it’s a complex and wonderful system to put in place that dynamically plays out over many hours … unless you’re me. Often, I prefer to stay on the beaten path and make my way through what I think is the canon story, but in doing so I miss all those amazing side quests and miss out on what is probably a large portion of the game.

So once again it’s Super Wife to the rescue for me. A shiny mission pops up from an NPC or a discussion offers the chance for a new objective, and she’s all over it! Don’t worry about that main story, we’ll go find that missing Lady because I think she’s not really missing! It’s like a Salesperson selling a product and I’m all in, the worry of missing out on the main story disappears like a vaper’s exhale and I’m now down to find out what’s going over there.

Maybe not by design, but who cares?

It’s for these very reasons that Outer Worlds became a surprise hit for us. A game that individually I’m sure we would have enjoyed and played through with different experiences, but easily made better by tackling it as a team!